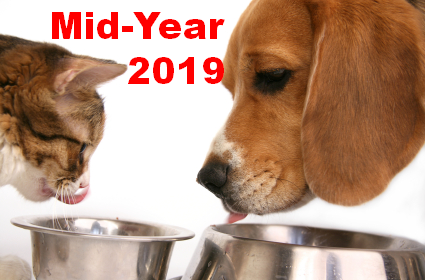 The US BLS just released their Mid-Year Update of the Consumer Expenditure Survey covering the period 7/1/2018 to 6/30/2019. The report shows Pet Food (& Treat) Annual Spending at $28.90B, down $2.46B (-7.8%). The following charts and observations were prepared from calculations based upon data from that report and earlier ones. The first chart will help put the $28.90B into historical perspective and truly show you the roller coaster ride that is Pet Food Spending.

This brought us to 2017. Time for a new “must have” trend. That didn’t happen but the competitive pricing situation brought about another change. Recent food trends have been driven by the higher income and higher education demographics. However, the “value” of Super Premium was established and now more “available”. Blue Collar workers led a new wave of spending, +$4.6B, as Super Premium more deeply penetrated the market. After the big lift in 2017, 2018 started off slowly, +$0.25B. Then came the FDA warning on grain free dog food. Many of the recent Super Premium converts immediately rolled back their upgrade and spending fell -$2.51B. This 2018 decrease broke a 20 year spending pattern. What came next? In the 1st half of 2019, Pet Food spending was stable, +$0.05B.

Let’s look deeper, starting with the 2 most popular demographic measures – age & income. The graphs will show both the current and previous 12 months $ as well as 2018 yearend. This will allow you to track the spending changes between halves.

That brings us to the obvious question, “What is happening in Pet Food spending at the start of 2019 across the whole range of demographic categories?” We will endeavor to answer that in our final chart. We will list the biggest $ moves, up and down by individual segments in 11 demographic categories.

The increase in the 1st half of 2019 was bland – up $0.05B but this bland result came from some tumultuous spending behavior…Always look deeper.

The Pet Food segment continues to become more complex. In September, we’ll see what the 2nd half of 2019 brings.