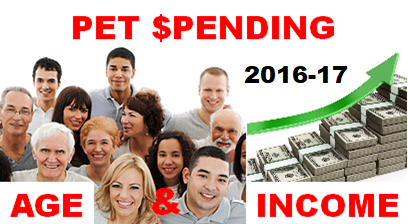 Using data from the annual Consumer Expenditure Survey conducted by the US BLS, we have done an in-depth analysis of U.S. Pet Spending in over a dozen different individual demographic categories. This has given us a better understanding of “who” is behind the strength and continued growth of the Pet Industry.

We have seen that the key demographic factor behind increased pet spending is income. At the same time, the demographic that attracts the most broadscale interest and media attention is the spending by generation. Although we can’t  bundle these 2 together. The US BLS has again produced a report that combines the two most popular and impactful spending demographic measures – income and age group. To get the required sample size, they combined the data from 2016 and 2017. As you recall, Total Pet Spending averaged over $70B during this period . Unfortunately, due to the complexity of this report we only have the numbers for Total Pet, not for the individual industry segments.

Even this “simplified” report requires a rather complex analysis. We have endeavored to keep it as simple as possible to make it easier to visualize and comprehend. The data is segregated into the following groups:

This produces 25 subgroups, accounting for 98% of Total Pet Spending. The under 25 group is not included due to a very low share of Pet Spending and an extremely small sample size in the highest income levels. It is still very complex, especially in building graphs. Therefore, we will again focus on the largest, most impactful groups. Our first chart shows the share of CU’s for the 10 largest age/income segments. There are highlights which apply to all 3 share/performance charts in the report and should help you in viewing and comparing the data.

It’s not all about income and age. There are other factors that impact Pet Spending. Two of the biggest are homeownership and family size, especially the number of children in the household. The following graphs show the distribution of these two demographic measurements across income and age groups.

# of children under 18 – Larger households can create financial pressure which can impact spending on Pet “Children”. As expected, most children, at least the ones under 18, are in the 25>54 yr old group, peaking with the 35>44 yr olds. The number children tends to increase with income. However,  the 25>34 yr old Millennials are an exception. CU’s with incomes below $50K have the most children. There are also two dips in the number of children – $50>69K and over $100K. Let’s see if that impacts pet spending.

% Homeownership – About 81% of Total Pet Spending comes from Homeowners. Having more space that you control has always been a key to increased pet spending. Homeownership regularly increases by age and income. For every age group, higher income means a higher percentage of homeownership. This is also true by income group as increased age shows increased homeownership, with one slight variation. In CU’s making over $100K, the 55>64 yr olds edge out the over 65 group – 94 to 93 to claim the overall title. The national homeownership average is 63%. You can see that the younger the group, the higher the required income to meet the average.

Now let’s get to the $pending. The next chart groups Pet Spending by income group so we can see if age matters. 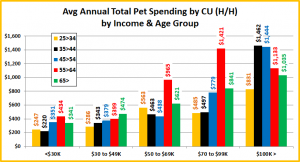 Now let’s look at the same data from the age group view. 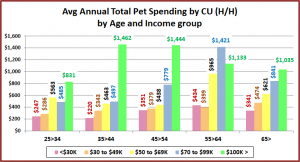 Now, we will truly “show you the money”. Here are the top 10 groups in share of Total Pet $pending.

Finally, let’s look at the top performers which we will define as having the highest Share of Pet $/Share of CU’s. It is the same group as last year and 8 are repeats from the chart above and have matching colors in the chart below.

The data in this report strongly reinforces the importance of income in Pet Spending. It also gives evidence that the younger groups, primarily the Gen Xers, are beginning to step up, especially in their higher income segments. The availability of disposable income results in increased Pet Spending for every age group. Pet Spending really explodes when any group’s income meets or exceeds $100K. For the lower income groups, the amount of available disposable income varies due to circumstances. The younger groups have more pressure due to family size and building a career. The 45>64 age groups have less family pressure. The over 65 folks just need to meet some low minimum income levels. One thing is certain for everyone. When disposable income increases, one of the first places that it gets spent is on pets.