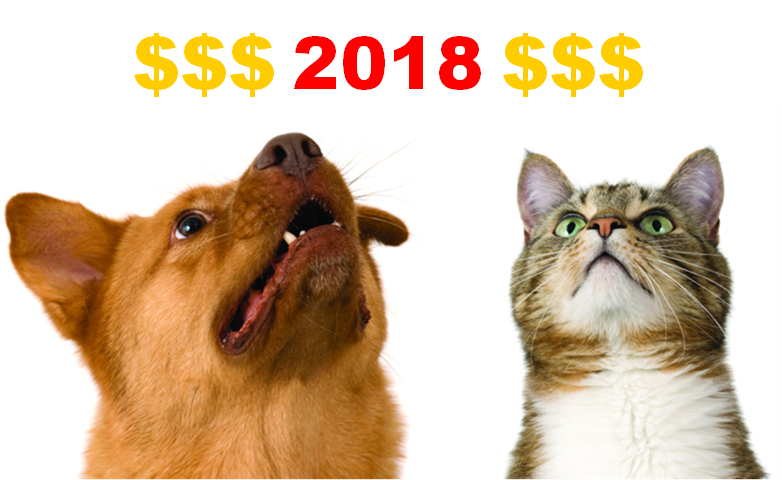 The Total U.S. Retail Market in 2018 reached $6.03 Trillion dollars – up $282B (+4.9%). This is slightly better than last year’s (+4.3%). For this report, we will focus on the “Relevant Retail” Total – removing Restaurants, Auto and Gas Stations from the data. This segment totals $3.6 Trillion. We should also note that in 2018, Gas prices continued to increase. As a result, for the second consecutive year there was an increase in revenue in all these major segments.

The U.S. retail market has grown each year since 2013 but each segment has a different pattern. The low point for the total came in 2015 due to a precipitous drop in gas prices. However, with a big turnaround in gas prices beginning in May of 2016, the growth rate of the overall market has returned to more normal levels. Restaurant sales growth had been slowing since 2015 but came back strong in 2018. Auto sales are still strong, accounting for 1/5 of the total market but the growth is definitely slowing. Our “Relevant Retail” Segment has been the most consistent, at or near 4% growth each year. However, we should note that after 4 consecutive years of exceeding the growth rate of the total market, its growth rate didn’t meet this standard for the second consecutive year. It will still serve as a benchmark as we review the individual channels. Above 4.3%, a channel is gaining market share. Below 4.3%, they are losing ground. 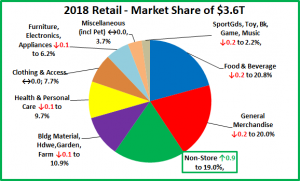 These are large slices of the U.S. Relevant Retail pie. If you look closely you will see a troubling situation. 2 divisions maintained their share but 6 lost ground. In fact, only Non-Store retailers increased their share of the total retail market. Three divisions – General Merchandise Stores, Food and Beverage and Non-Store account for 59.8% of the total. This is up slightly from 59.3% in 2017. However, the increase is all due to Non-Store Retailers. The other two major segments continue to lose market share. All three are very important to the Pet Industry. Based upon the last U.S. Economic Census, these three major divisions produced 59.7% of total Pet Products sales. Consumers spend a lot of money in Pet Specialty Stores – 33.1% of their Pet Products $. However, they spend over 80% more in these 3 major retail channels. Pet products are “on the list” wherever the consumer shops.

Because they are so huge, major Divisions of the market generally don’t show much movement in market share in just one year so the changes in General Merchandise, Food & Beverage, Non-Store and Sporting Goods are very significant. Each of the major divisions includes a number of sub segments. For example, General Merchandise includes Traditional Department Stores, Discount Department Stores, Supercenters and Clubs as well as $ and Value Stores. These specific retail channels can have even greater movement in share because this is the level that the consumer “views” when making their initial shopping choice. Change at this level is where any ongoing consumer shopping migration first becomes apparent.

With that overview, we’re ready to drill deeper into the data. Let’s look at the 2018 performance of some of the specifically “Pet Relevant” Channels to see which are doing the best…and worst in gaining consumer spending. Eleven of the twelve were chosen because they generated at least 1% of the Total Pet Products (food & supplies) spending in the last Economic Census – 2012. I have also included Traditional Department stores on the list. Even though they have never truly embraced Pet Products, they have long been a fixture in the U.S. Retail Marketplace. Their continued decline, as consumers migrate to outlets which better fit their needs, has profoundly affected U.S. retail shopping as generally they were the “anchor” stores for the Shopping Malls across America.

We will use 2 separate graphs to illustrate the situation in these Pet Relevant Channels. The first will show the % change in sales in 2018 vs 2017. The next will “show us the money” by translating the percentages into $ gained or lost. Then we will have observations on each segment.

Remember, you must be up at least 4.3% or you’re losing market share! 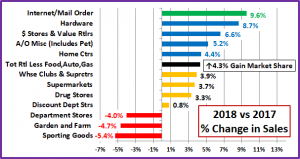 9 of these pet relevant channels are showing increased sales. However, in market share, 5 are gaining, but 7 are losing. Hardware stores is a surprise on the plus size. The market share losers include the traditionally largest channels plus Farm Stores, last year’s leader. In the next chart, we’ll “show you the money!” Remember, the Total increase for the “Relevant Retail” Market was $147B and you must be up 4.3% PLUS $3.6B just to gain just 0.1% in Market Share.

The continued, spectacular growth of the Internet is obvious as the $ increase in this segment was equal to the combined increase of Supermarkets, SuperCenters/Clubs and Home Centers. The revenue from Home Centers and Hardware is also still growing as weather related property damage continues to be a major problem. Consumers again turned their time and resources to repairing their homes. The continued strong increases by $ Stores is evidence that consumers want value plus the convenience offered by these smaller outlets. The A/O Miscellaneous segment is holding its own as consumers desire more personalized service in certain categories – like Pet Products.

The chart below puts the Market Share of each of these segments for 2018, 2017 & 2016 in a visual format so that it is easier to appreciate the relative sizes. Growth in share since 2016 is indicated by a green box, a decline is boxed in red.

Pet Stores remain the #1 channel for Pet Products. However, in the Relevant Market, there are 3 Olympic Medalists. SuperCenters & Clubs are firmly entrenched with the Bronze medal. The big race is for the Gold. In 2014, SuperMarkets led the Internet/Mail Order Channel by 6.1% in market share. In 2018, the lead was down to 0.97%. Barring a major turnaround, Internet/Mail Order should become the #1 retail channel in the U.S. in 2019. Amazon, the largest retailer in the segment, has firmly set their sights on the fresh grocery business. Supermarkets are trying to fight back by creating online ordering programs. However, this is probably too little, too late to stave off the internet juggernaut.

The annual increase in the Relevant Retail market has grown in recent years from +3.5% in 2015 to +4.3% in 2018. However, for the second consecutive year the increase in the “Relevant Retail” market was less than the increase in the Total Retail Market, +4.9%. This was again due to a big increase in Gasoline prices which drove up sales in Gas Stations. Once again. the Internet/Mail Order Channel provided much of the excitement and 35.4% of the growth in Relevant Retail. SuperMarkets, SuperCenter/Clubs and Home Centers generated 36.4% of the increase, but only Home Centers gained market share and that was only +0.01%. Traditional Department stores continued their decline while sales in the easy to shop and save, $ Stores grew. The small to medium A/O Miscellaneous Stores (Includes Pet) maintained their place in the market by appealing to consumers desiring a more personalized shopping experience.

The U.S. Retail Market continues to grow and evolve as the consumer migrates to the channels which best fulfill their current wants and needs. This is not a new phenomenon. It has always been that way. Currently, the “Channel of Choice” is Internet/Mail Order and their victory appears to be inevitable and coming soon. Traditional Brick ‘n Mortar stores will not go away but they must adapt to the new “electronic” environment if they wish to survive. 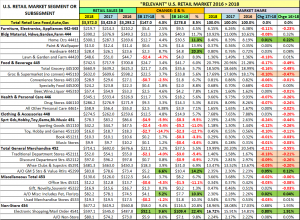 SuperZoo 2019 – It’s a great Opportunity and a Sure Winner!
Scroll to top