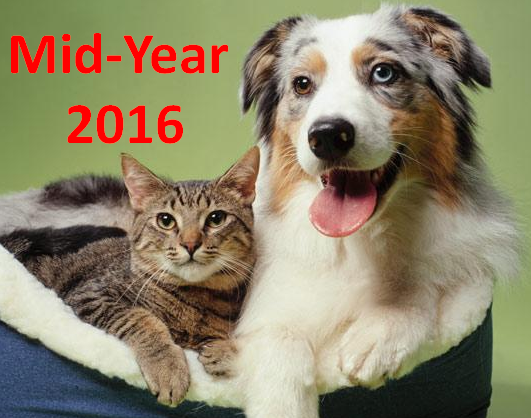 2015 was quite a year for Pet Food but not so good for Pets & Supplies. Now it’s time to see what the beginning of 2016 brought to Supplies Spending. In the US BLS Mid-Year Update of their Consumer Expenditure Survey covering the 12 month period ending 6/30/16, Supplies Spending was $14.84B, down $1.01B from a year ago and even slightly less than 2013. The following chart should put the recent history into perspective.

The Chart clearly shows the Spending ride that Supplies has taken since 2013, climbing to the summit in 2014 then descending into the valley in 2015. Supplies is a diverse and complex segment so there are a number of factors behind these changes in Spending. For this report we will focus on 2 which seem particularly relevant.

The first is pricing – inflation/deflation. Many Supplies Categories are commoditized so spending is impacted by the rise and fall of prices. 2014 was a “deflation” year. Prices were down so the largely discretionary Supplies spending was up, way up. During the Holiday season of 2014, prices turned upward. Spending was not significantly slowed…but the prices stayed up into the new year. This would have a negative impact.

At the same time in 2015, another trend was starting in another segment. A large group of consumers, mostly Baby Boomers was choosing to upgrade their Food to Super Premium. This upgrade was significantly more expensive so this group immediately began looking for ways to save on discretionary spending. Basically, everyone was looking for savings and Supplies prices were going up. The result was a $2B drop in Supplies spending primarily from only a 10% decrease in purchase frequency.  In Nov-Dec 2015, the Consumer Price Index for Pet Supplies dropped by a record 2% – but it wasn’t enough to turn the year around. Prices stayed down for the first half of 2016 and Spending stabilized at the level of the same period in 2015, which is not good, but at least it stopped falling.

At the end of 2015, every age group was showing decreased spending on Supplies vs 2014. At the Mid-Year update in 2016 we are starting to see evidence of at least a pause in the decline if not the beginning of a turnaround.

Just like the Age Groups, every Income group showed decreased spending in 2015. At the 2016 Mid-Year update, the decline is still pretty pervasive but there are a couple of positives.

2015 was not a good year for Supplies. It was a year of price inflation. While not strictly tied to the CPI, many of the commoditized Supply Categories are strongly influenced by price. With inflation, Spending fell $2.1B in 2015. Prices had a record drop in November-December. This may have mitigated the decline but it was not enough to turn the second half around. The lower prices continued for the first half of 2016 and Spending stopped falling and flattened out at a level equal to the first half of 2015. What will happen in the second half? We’ll just have to wait and see. The Segment could certainly use a turnaround. Here are some large Demographic segments that are showing an increase in Supplies Spending for the first Half of 2016 and might lead the way.