U.S. Consumers spent $6.8 Trillion dollars in 2014. Of this huge sum 0.95%, $64.3B was on our companion animals. In our recent posts, we have started to look at the key demographics behind “who” is spending the money. By looking deeper, all of the industry participants can better target their products and marketing efforts to maintain and gain retail sales…keep the industry strong and growing.

In terms of demographics, nothing has a higher profile in the media than comparing the actions between generations. How do the Millennials compare to the Baby Boomers? What’s happening with Generation X? These are valid questions and the Generation Demographic is the one measure that defines a very specific group of individuals for a lifetime. Emigration, immigration or death can change the mix and of course, marriage and divorce will affect the number of households. However, we can still track how aging, technological changes, economic events, in fact any change in society affects the behavior of a specific group of individuals.

The USBLS which provides us with a variety of helpful business reports, including the CPI and the Consumer Expenditure Survey, just announced an addition to the CE Survey – spending by Generation. The first report is for 2014. It is still officially in the experimental stage, as they fine tune the details. The “official” inclusion in the CE is currently scheduled for 2016. The published version of this CE Report includes over 150 line item details – (2 Pet – Total & Supplies). The “prepublished” version is much more detailed, with over 1500 items including all Pet Industry Segments. Obviously, we looked at the “prepublished” version.

Unfortunately, the data had to be sorted by birth year so it can’t be compared to previous years, which were sorted by age. However, this new report provides an immediate “snapshot” of purchases for an incredibly topical demographic that will become even more valuable as time goes by and we can track changes.

Before we get into the specifics of Pet Spending, let’s look at a few key overall Generational demographics: 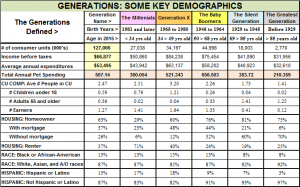 The chart below shows how each generation compares to the U.S. Consumer Unit (H/H) average in terms of gross income, annual expenditures and pet spending.

Let’s translate averages into total Pet $. Here’s how much each Generation spent on their Pets in 2014. 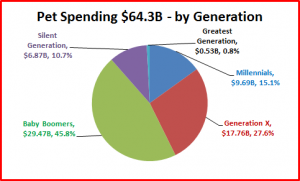 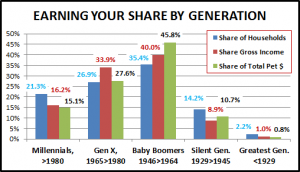 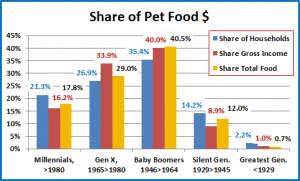 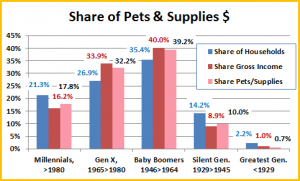 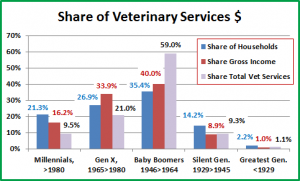 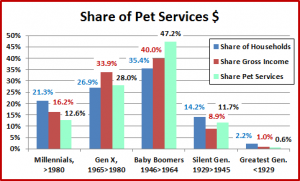 The Baby Boomers truly are the major source for the current and past success of the Pet Industry. Gen X and The Millennials seemed to be well positioned to ultimately take their turn at #1. However, it is critically important to transition the Boomers into retirement. Income will become an issue so we need to encourage their spending with …products designed to meet the needs of Senior Pet Parents…Senior discounts. This Demographic view also shows that a commitment to pets spans all the current generations…a lifetime commitment.

One question is sure to come up. “Just what is the term of years for each Generation?” The years used by the USBLS come from PEW Research, a well-respected, non-partisan “fact tank”. I have read their rationale and it makes sense, but there is no shortage of opinions on this issue.

As we said, this report is still in the process of being revised and finalized. The USBLS has mentioned the possibility of making the data available by individual birth year. This would be a huge amount of data but one could build reports to exactly match up with other generational research efforts.

I look forward to their next report. Hopefully, we will then be able to begin to track movement in the spending of the Generations.

A detailed Appendix on Pet Spending by Generation is available through the link below. Just click on the button to download and save the file as a PDF. If you would like this in Excel format, send me an e-mail request.