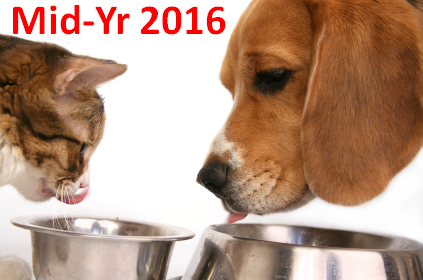 The US BLS just released their Mid-Year Update of the Consumer Expenditure Survey covering the period 7/1/2015 to 6/30/2016. The report shows Pet Food Annual Spending at $28.62B (Food & Treats). The following charts and observations were prepared from calculations based upon data from that report and earlier ones. The first chart will help put the $28.6B into perspective with recent history. 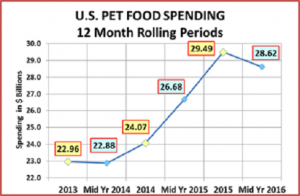 2015 was the critical year. It produced the tremendous lift in spending due to the move to upgrade to Super Premium, which was primarily driven by the Baby Boomers. However, 2015 was a unique year in another way too. There was a radical increase in Food Spending and at the same time, the biggest deflation since they began keeping records back in 1997. These don’t usually go together since you don’t buy more food just because it’s cheaper. Perhaps the brands that were losing consumers to the Super Premium Foods were trying to “buy them back”. The result was we had the huge lift due to the upgrade at the same time that everyone else was paying less for their regular food. This appears to have created a value shopping mentality in that the consumer was looking for the best price in other retail outlets and the internet. The deflation continued through the first half of 2016 and so did the pricing scramble.

Mid-Year 2016 Pet Food Spending totaled $28.62B, an increase of $1.94B (7.3%). That is excellent but I’m sure the question on everyone’s mind is what about the $0.88B decrease in the first 6 months of 2016? What does that mean? Unfortunately, there is no absolute answer. The huge $5.4B lift in Food in 2015 came primarily from the upgrade in Food by Baby Boomers. In fact, their increase was closer to $5.8B so they made up for declines in other groups.

When a large group makes a major change like switching to Super Premium, not everyone will stick with it. You will undoubtedly see some slippage. In the first half of 2016, the 55>64 age group spent slightly less than in 2015 – $0.19B. The Retired group spent a lot less – $0.9B.

There is another factor at work here in the decline in spending in the first half of 2016 which affects everyone…deflation. There was strong deflation in Pet Food Prices for all of 2015 and this continued into the first half of 2016. Even if you are loyal to your Pet Food Brand, why would you pay more than you have to? In today’s world, price comparison is much easier and the internet is now a real option for Food as well as Supplies. Consumers did their homework and paid less.

For 2016 to show an increase over 2015, consumers would have to spend $0.9B more in the second half of 2016  than they did in the second half of 2015, which was the largest second half of all time. Deflation ended in July of 2016 but without a move to Super Premium by a significant demographic segment(s) an overall increase for 2016 seems unlikely. We’ll wait and see. Don’t be overly concerned. In reviewing 30 years of Pet Food Spending history I have noted that there are periodic plateau years where spending slows or even declines slightly, only to bounce back with a renewed vigor. Recent Plateau years occurred in 2013, 2010, 2006, 2003, 2000 and 1997. Pet Food will come back strong, either in the second half of 2016 or in 2017. It always has. Here are some demographic segments that showed strength and increased Pet Food spending in the first half of 2016: