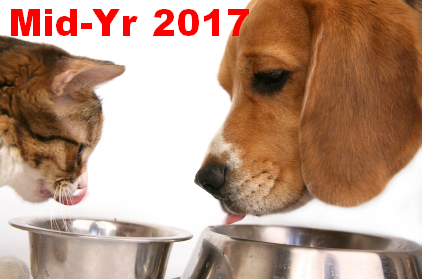 The US BLS just released their Mid-Year Update of the Consumer Expenditure Survey covering the period 7/1/2016 to 6/30/2017. The report shows Pet Food Annual Spending at $28.44B (Food & Treats). The following charts and observations were prepared from calculations based upon data from that report and earlier ones. The first chart will help put the $28.44B into perspective with recent history. 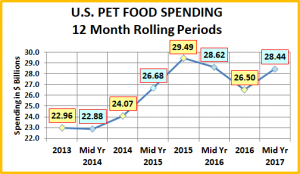 Spending turned sharply upward in the first half of 2017. This probably should have been expected. We have noted in previous reports that Pet Food spending has been on a roller coaster since 2000, with 2 years up, followed by a flat or even declining year. This chart perfectly reflects this pattern. This up and down “ride” has been driven by a succession of Food trends. 2013 was a down year. It was followed by 2 up years as an increasing number of consumers opted to upgrade to Super Premium Foods. Spending peaked in 2015 then fell sharply as consumers began value shopping for food, at retail outlets and on the internet. With the big lift in the first half of 2017, it looks like we’re right “on track” for a spending increase in 2017. In fact, in the second half of 2017, if we recover only half of the $2.12B drop that we had in the second half of 2016, 2017 will set a new record high for pet food spending.

There is another factor at work in the market. From 2014 to 2017, the Pet Food segment experienced a period of record deflation. Normally, in a need based category, this would drive spending down. That has not been the case. In fact prices edged up 0.2% in 2016 when sales were plummeting. What it does indicate is that we are in an incredibly competitive market. This is great for today’s value driven shoppers but it is tough on manufacturers, distributors and retailers.

Now, let’s see where the $26.44B came from – First by Income Group (Increases highlighted in green)

That brings up a good question. Let’s look at Pet Food Spending by Age Group. (Increases highlighted in green.)

One of the primary purposes of the Mid Yr Update is to see how the latest year is starting. Considering the differences between the income and age reports, it makes sense to compare the most recent Jul>Dec and Jan>Jun numbers to the previous period. Spending is flat but seems to be turning up in 2017. These charts will show us when the change started.

If the newest trend is focused on high nutrition, with clean labels and transparency, it may have “struck a chord” with Gen Xers. Here are some more demographic segments with a strong start to 2017, which support the assertions above.

These groups suggest that the new trend could have an even broader appeal. We’ll see what happens in the second half.