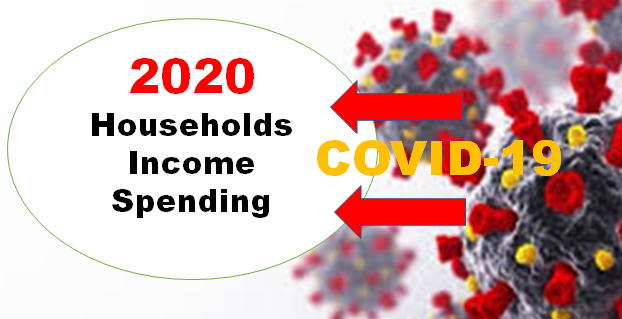 The Pandemic of 2020 had a huge impact on life in America. The stay at home mandates and lockdowns especially affected the Retail Trade. The effects weren’t always negative. In our regular analysis of Data from the Census Bureau’s Monthly Retail Trade reports, we saw some channels, deemed essential that actually benefited from the pandemic restrictions. Although Restaurants, Auto and Gas Stations were initially hit hard, the essential channels in the Relevant Retail group benefited from a lift in consumer spending so much that spending in the whole Retail Sector turned positive for 2020 vs 2019. Admittedly, the increase was small, +0.5% but Sales have continued to grow in 2021 in virtually all channels as at least Retail Spending has essentially recovered from the pandemic.

This data is gathered directly from Retailers by the Census Bureau so it is essentially the “sellers’ point of view”. The US Bureau of Labor Statistics conducts an annual Consumer Expenditure Survey (CEX), which is also designed and executed by Census Bureau Personnel. This presents the spending situation from the “buyers’ point of view”. The data is gathered from diaries and interviews of over 42,000 U.S. CUs (Financially Independent Consumer Units – essentially Households). The early days of the pandemic caused some problems in information gathering and responses, especially in the Diary method. These variances generally showed up in specific small segments. The overall data and the numbers for larger groups were still well within acceptable guidelines. The Census Bureau adapted their methodology to better fit the situation so that by the 2nd half of 2020, the response rate had returned to more normal levels.

The 2020 Consumer Expenditure Data was just released by the US BLS. You are all familiar with some of the data as I use it to develop mid-year and annual reports on Spending in the Pet Industry segments and Total Pet. The data goes way beyond that. It details the CU spending on over 1650 specific expenditures by over 80 demographic segments. Yes, it covers Pet Food $ but it also includes the amount spent on underwear for Children under 2 years old as well as the amount spent on bottled gas for an owned vacation home. To say that it is detailed would be a serious understatement. It also points out another major difference between the CEX and the Monthly Retail Trade report. Both are about spending. However, the Monthly Retail Trade report shows where the $ were spent but doesn’t provide details on what was bought. The CEX is essentially the opposite. It details what was purchased but doesn’t say where the consumers bought it. These 2 viewpoints are both important in getting an overall view of the situation.

I am currently building the database for my Pet Industry reports but I thought that the unique nature of 2020 merited a preliminary summary of the overall spending situation. This will put the Pet spending data into a better perspective. We’ll start with some basics and then get a little more specific for some relevant expenditures. However, if you want to know the spending situation on bottled gas for owned vacation homes, you’ll have to send me a separate request.

Let’s look at what groups lost CUs and where the people may have gone.

Here are some big decreases:

The loss in the oldest Americans is not unexpected and is primarily due to movement to assisted living or passing on. There was an increase in homeownership, but it was far less than the drop in renters. The <25 group is getting older, but it should still be growing, not dropping precipitously.

Here are some significant increases:

This clearly shows that a lot of the <25 group, moved back home with their parents or in with other adult friends.

This data shows that the CU count drop was driven by the pandemic economic impact on the younger crowd. Before we get into the $. Let’s look at some CU characteristics for 2020. We’ll note the changes from 2019

Now let’s get into the $, First Gross Income

CU Gross Income – The average CU income in 2020 was $84,352. That’s up +$1500 (+1.8%) from 2019. Considering the impact of the pandemic on the workplace, any increase seems surprising. Let’s see what groups had the biggest gains and losses in earnings. The changes are expressed in percentages to allow better comparison of the impact.

Here are some big “winners”:

The income increase primarily occurred in CU’s with the lowest 80% of income. You see big increases in groups like <25 and Singles which lost a significant number of CUs. Obviously, things improved for those in these groups that held their ground. Many of the “lost” CUs moved in with parents or other adults. This had a positive impact on the income of those CUs – like Unmarried 2+ Adults, Married Couples w/child over 18, 3+ Earners and 5+ CUs. You also see that HS Grads had the biggest income increase, which is not the “normal” way of things.

And here are some that didn’t do that well:

The overall income of CUs increased 1.8% but not for the highest earners. The income for the 20% of CUs with the highest income actually fell -0.2%. The 2 highest income occupations – Managers & Professionals and Self Employed had drops in income, as did College Grads. The 55>64 year olds, the highest income group of Baby Boomers and Homeowners w/Mtge also lost ground. Overall, CU Income was up, but it was not a “normal” year.

This next group was negative in gross $. All but Self-Employed improved performance in net income but they still stayed negative. The Managers & Professionals had the biggest improvement, going from -4.4% to -0.4%.

In this group, the poorer got “richer” with a bigger increase in after Tax $. I added the <$30K group to our list because their performance was amazing.

Now let’s move on to spending. First, Total Expenditures in 2020.

CU Total Expenditures – The Average CU in 2020 had total expenditures of $61,334, down -$1702 (-2.7%) from 2019. This is not unexpected with the trauma and restrictions of the pandemic. Let’s see what groups had the biggest losses and those with gains in spending. The changes are expressed in percentages to allow better comparison of the impact.

Here are some groups with Big Decreases in Spending:

You can see that in general, the biggest dips in spending came from the highest earning groups and it was skewed a little older but generally widespread, with 2+ people CUs (70.2% of the total) down -3.8%.

Now let’s see some groups that went against the trend and Increased their Spending in 2020:

In general, the increases came from lower income groups, but it was somewhat mixed with both the 2nd highest income and lowest income groups spending more. That means that 40% of CUs spent more but were not able to overcome the drops by other groups, especially the big decrease from the highest earners.

We have looked at the demographics of the change in spending from 2019 to 2020. Now let’s look at some significant changes in how the money was spent.

As we know, Supermarket Spending was up +10.7%. This shows that a lot of that lift came from nonfood items. The Restaurant & Bar numbers reflect the big drop that we saw in sales at Retail Restaurant outlets. We should also note that the 20% of CUs making the most money had a 44.8% increase in Wine at home. Their drop in Restaurant spending was also equal to the total $ spent by CUs with the lowest 40% of income. Although Clothing stores began to recover in 2021, you see the impact of store closings. Plus, if you work from home, clothes are less of a priority, and you need less dry cleaning.

We see the impact of the additional CUs acquiring homes. We also see the focus on home maintenance that drove the big spending lift in Home Centers and Hardware. One thing is constant. Insurance companies charge more!

If you spend more time at home, including working there on a regular basis, you’re going to need furniture and equipment to do it comfortably. A home office requires office furniture. You’ll also want to upgrade your home computer. If your office is set up in a small room or basement, you need to insure a comfortable air temperature. Finally, when you take a break, why not comfortably relax in the backyard?

We saw in our Retail Channel analysis that the Auto Industry had broken even by year end 2020. That was largely driven by aggressive deals on new cars. That is reflected in these numbers. We also travelled significantly less, which is reflected by Gasoline, Mass Transit, Parking, Air Fares and Rental Cars. Once again, we can always count on insurance companies …as that spending went up +1.9%.

Health Care spending was down. Much of the expenses for COVID were covered and elective treatments were reduced. Even regular doctor visits declined. You can see that some people increased home remedies and of course, we can always count on the Insurance Industry – spending up +3.9%.

We still needed to have fun but as you see movies and in person events largely went away. We turned strongly to the internet. The big increase in musical instruments is interesting. Remember, a Musical Instruments Store chain made the list of the Top 100 Retailers for the very first time in 2020.

We have largely been focused inside the home. Let’s take a look at what was happening in terms of outdoor recreation and living. Remember sales in Sporting Goods Stores took off in the latter part of the year.

You can see that we moved towards the outdoors, and the commitment was strong. We didn’t rent. We bought! Winter Sports was an exception because you can’t just go skiing. You need to go to a resort. The lift in home fireworks was huge and probably reflects consumers trying to make up for the cancellation of a lot of the planned July 4th celebrations.

Here are some other interesting big changes in expenditures that don’t immediately fit into previous categories.

These generally are expected changes, but they may be bigger than expected. I was surprised by the increase in Charitable and Political contributions. It does reinforce the fact that Americans want to get involved in a crisis. I must admit that I was stunned that we spent less on Marijuana. Gambling losses were down but never fear, betting has moved online. Plus, the Top 20% in Income loss 34.5% more on gambling than in 2019.

One last thing: Government Stimulus Money. Each of these 5 groups has 20% of Total CUs, based upon income level. Here is their share of Stimulus $:

The payment was relatively balanced. However, it is concerning that the smallest share went to the lowest income group. Perhaps, the program should have been skewed even more towards lower income groups.

The data in the report often provides specific examples which reflect the trends seen in our ongoing analysis of sales by Retail Channel. I hope that it gives you a better feel for the monetary impact of COVID on U.S. Households in 2020.