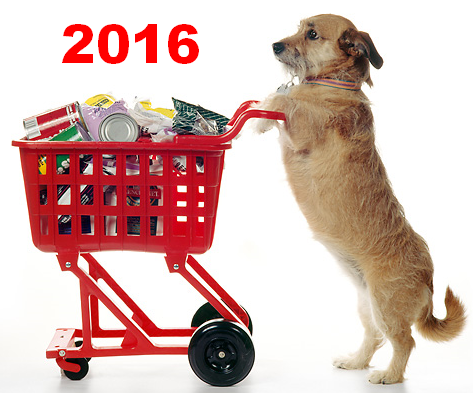 The U.S. Retail market reached $5.5 Trillion in 2016 from all sources – Auto Dealers, Supercenters, Restaurants, Online retailers, even Pet Stores. This year’s increase of $172B was more than 2015’s $118B as the decline in Gas Station revenue slowed. (Data courtesy of the Census Bureau’s Monthly Retail Trade report)

In this post we will try to narrow the focus to the top 100 Retailers in the U.S. Market – the headliners. These 100 companies account for 38% of the total retail market! How did they perform in 2016 vs 2015…and of course, which ones sell Pet Products? Remember, according to the 2012 Economic Census, over 2/3 of the Pet Products in the U.S. are sold outside of Pet Stores. The Top 100 group accounts for a huge share of these sales. This report is crammed with data, but we’ll try to break it into smaller pieces with regular observations. All of the base data on the Top 100 comes from Kantar Research and was published by the National Retail Federation (NRF).

The Top 100 is obviously critically important, and it’s still outperforming the overall market…barely. We need to remember that the “Top 100 club” is in fact a contest. Every year companies drop out and new ones replace them. This can be the result of mergers, acquisitions or simply slumping sales. Changes of note in 2016:

Now let’s start “drilling down” on the Top 100. Here’s a summary of Regular and Online Retailers versus the bundled total for Restaurants & Gas Stations.

Sales for Retailers with pet products remain strong. Also note that the store count totals are only for the Top 100 and include only 2 Pet Chains and 1 Farm Store Chain, as they were the only companies to make the list. Pet Products are sold in thousands of other retail outlets – 20,000 more grocery stores, 10,000 more pet stores, 16,000 Vet Clinics plus…. A reasonable estimate would be that there are 200,000 outlets selling pet products in the U.S. plus… the internet.

In the next part of the report we will look at the detailed list of the top 100. First, we’ll sort it by retail channel with subtotals in key columns. Then we’ll break it into smaller sections for comments. At the end of the post there will be a download link for an Excel file with the data. This will allow you to sort it as you choose…by rank, alpha, pet/nonpet…it’s your call. 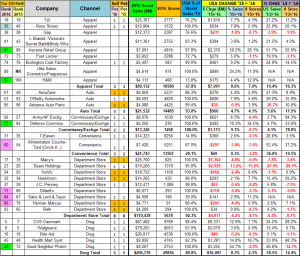 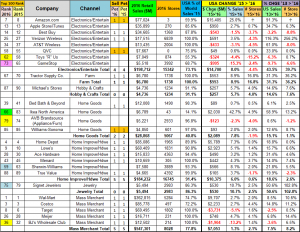 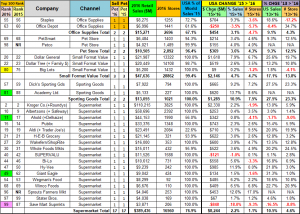 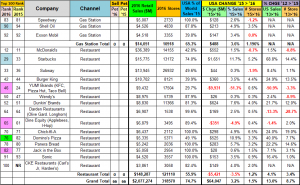 Pet Products are an important part of the success of the Top 100. Sixty-six companies on the list sell Pet Food and/or Supplies in 138,000 stores and/or online. If we drill down a bit, we get to 54 retailers who stock pet in their stores. This group generated $1.6T in sales. Now, let’s “Do the math”. If we take out the $10B done by PetSmart and Petco and the remaining companies generated only 1.5% of their sales from Pet, we’re looking at $23B in Pet Products sales from only 52 “non-pet store” sources! By the way, the 1.5% estimated share for Pet items is low based on data from the U.S. Economic Census.

Whether you are a manufacturer, a distributor or a competing retailer, monitoring the Top 100 group is important. What happens in this group reflects the evolution of the overall retail market. We see the continuing decline of Department Stores coinciding with the growing popularity of Value outlets. Nothing demonstrates the growing influence of the internet better than Amazon’s continued spectacular growth. The competition in the market is clearly shown in Supermarkets, where 8 Top 100 retailers became 4 in just 2 years through mergers/acquisitions. In business, like in biology, you must adapt to a changing environment or face extinction.