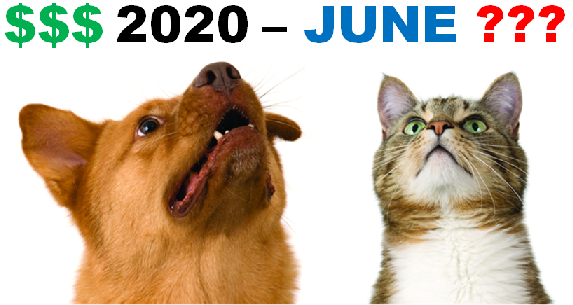 This means to get the full picture in our monthly channel update we need to look at the latest release of both reports. We will begin with the Final Retail Report from May and then move to the Advance Retail Report for June. This will also allow us to better track the consumers’ evolving spending behavior in terms of channel migration.

We’ll start with the May Final report. The Retail Market was beginning to recover after hitting bottom in April. First, we will look at some major retail groups. (Note: The Data in all graphs is Actual, Not Seasonally Adjusted)

The final total is $2B more than the Advance report projected a month ago. Although Relevant Retail was $2B less than expected, the Auto segment was $3B better. Restaurants also were $1B more than the early numbers but Gas Stations’ $ were the same. $ales were up vs April across the board but down for all but the Relevant Retail group vs 2019 and YTD.

The Spring Lift usually begins in late March and peaks in May as consumers focus on the outdoors. Closures and “staying at home” pushed that back. Things began to open up in May, but except for Relevant Retail, $ were down vs 2019.

Now, let’s see how some Key Pet Relevant channels were doing in May. 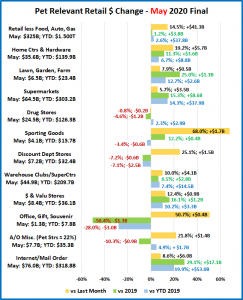 After a disastrous April, May saw the beginning of a slow recovery. As businesses began to re-open the numbers started to move in the right direction. Driven by the Internet, Supermarkets, SuperCtrs/Clubs/$ Stores and Hdwe/Farm the Relevant Retail Segment turned positive in all measurements. June brought even more widespread re-openings. Let’s see how the situation is progressing. Here are the Advance numbers for June.

April was the biggest spending drop in history. May was $97B better but still the second worst decrease in history, -$40B from 2019. In June, monthly sales turned positive for the first time since February as Total Retail was up $12B vs 2019.

Restaurants – Spending increased $6B over April but was still down $18B vs 2019. The year started out good, up $9B (+8.1%) through February. Then mandates forced many restaurants to close. Delivery and curbside pickup couldn’t make up the difference. Even the gradual re-opening in May and June was not enough as spending is now down $86B YTD.

Automobile & Gas Stations – If you can’t go out, except for necessities, then your car becomes less of a focus in your life. Buying a car was definitely less of a priority. Auto Dealers, both new and used, have been combating this with some fantastic deals and a lot of advertising. In June they turned the corner as sales were up $10B versus 2019. In terms of Gas Stations, May is traditionally the beginning of the vacation travel season but not in 2020. Although sales increased in May and June, they are still down -$42B YTD. People are still not driving as much, whether for commuting or road trips.

Relevant Retail – Less Auto, Gas and Restaurants – Many non-essential businesses began to shutter their doors in March but there was also a rash of binge/panic buying for “necessities” and a big lift in groceries as consumers focused on home cooking which drove spending up $19B. Then came April. With a full month of closures and an end in binge buying, spending dropped $34B from March. In May, the overall market began a slow reopening so spending began to move in the right direction. Nonstore, Grocery and SuperCenters/Clubs & $ Stores continued their growth. The spring lift in the Hardware/Farm channel got even stronger and Sporting Goods stores got on  board. In June, these big drivers couldn’t quite match their May numbers, but the openings became more widespread and the Relevant Retail group now has posted positive numbers versus last month, last year and year to date for 2 consecutive months.

Now let’s look at what is happening in the individual retail channels across America. In June, consumer spending in the relevant retail market grew even more positive versus 2019. Let’s see where the $ came from. These groups are less defined than in the Final Monthly reports and we will look across the whole market, not just pet relevant outlets. 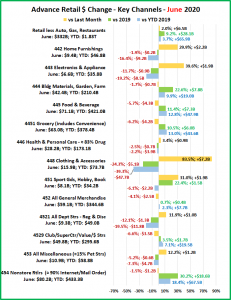 The increase over May was driven by re-openings. The increase vs 2019 and YTD came from essential businesses.

After a full month of stay at home and widespread closures there was surge in May. Things truly opened up in June which fueled an increase over May. However, the essential channels are responsible for the lift vs 2019.

General Merchandise Stores – Regular Department stores began reopening and Discount Department stores held their ground, so this cut the losses for Department Stores. Club/SuperCtr/$ stores provided the big positive force. In April consumers dialed back their panic buying and spending on discretionary items was also down significantly. In May and now June we saw consumer spending return to a more normal pattern in the big and small stores that promise value.

Food and Beverage, plus Health & Personal Care Stores – The Grocery segment is still driven by increased Food sales due to a slow restart by restaurants, up 10.5%, +$6B. Sales in the Health, Personal Care group are up slightly from May but remain down overall. Many Personal Care stores are now slowly reopening but Drug Stores sales are essentially flat.

Clothing and Accessories; Electronic & Appliances; Home Furnishings – More and stores are reopening, producing a spectacular increase in sales over May. However, June $ were still down from 2019. They all had the same pattern, with Clothing Stores being the most extreme. Their sales were up 84% from May but still down 24% vs 2019 and 39% YTD. These channels have a long way to go to recover.

Building Material, Farm & Garden & Hardware – This channel has its biggest spending lift in the Spring. The shelter in place rules caused many consumers to turn their focus to their needs at home, including house and yard repair and improvement. This has accelerated and extended their Spring lift. Sales are up across the board, including +9.9% YTD.

Sporting Goods, Hobby and Book Stores – Book and Hobby stores which had been closed are now open. Sporting Goods stores had generally been open but organized sports were on hold, parks closed, and non-essential travel was discouraged. In May things began to open up and this expanded in June. Consumers again sought outdoor recreation. Sales doubled from April to May and grew 31% in June. June $ even beat 2019 by 22%, but YTD they are still down 6%.

All Miscellaneous Stores – This group is mostly small to medium specialty stores – both chains and independents. While Pet Stores are essential, most other stores in this group are not. The closures hit this group particularly hard. May sales were up 27% from April as the reopening began and grew 12% in June. However, they were still down 5% vs June 2019 and are down 7% YTD. In February they were up $2.6B, +14.1% YTD. Now they are down -$4.7B – a big turnaround.

NonStore Retailers – 90% of the volume of this group comes from Internet/Mail Order/TV businesses. The COVID-19 crisis has only accelerated the ongoing movement to online retail. Compared to 2019, NonStore was up 16.3% in March, 22.5% in April, 25.3% in May and 30.3% in June. Since April they have been the leader in all sales measurements either in $ or % increase. As you can see, their lead is growing. Also, their YTD sales are up 18.4%, exceeding their 12.9% annual increase in 2019. This early year lift bodes well for 2020 as much of their annual increase is usually driven by Christmas.

Recap – After a record drop in spending in April, the situation improved slightly in May, but it still was the 2nd biggest year over year monthly retail sales decline in history. Restaurants, Auto and Gas Stations all had big sales increases in May and now June, but they are still struggling. The Relevant Retail segment has provided the only true positive as sales are up in all measurements for 2 consecutive months. However, for many segments in this group there is still a long way to go. In June Total Retail turned positive for the first time since February and Relevant Retail appeared to be moving towards a more routine pattern – a new normal. However, we are now seeing a resurgence of the virus and retail restrictions are being re-implemented in many areas and are likely to become more widespread. This is going to be a long battle with no end in sight. We will continue to monitor the data and provide you with regular updates as the situation evolves.