Blog - Latest News
You are here: Home1 / Pet Market2 / Race and Ethnicity in the Pet Industry 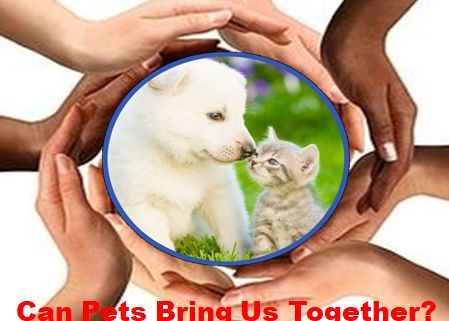 The issue of racial and ethnic inequities is a hot topic right now and for good reason. Despite laws and constitutional amendments, major societal and economic disparities still exist between White, Not Hispanics and minorities in the United States. In this report we will start to look at the Pet industry in terms of Race and Ethnicity. The Data is taken from U.S. Government sources including the USBLS Consumer Expenditure Survey, the HUD American Housing Survey and the Census Bureau’s Annual Business Survey. All of the surveys are designed and conducted by personnel from the U.S. Census Bureau to insure that they accurately represent the situation in the total U.S.

First let’s look at the racial/ethnic share of U.S. CU’s (financially independent Consumer Units – more defined than H/Hs) compared to their share of $78.6B in Total Pet Spending in 2018. Note: 260K CUs identify as both Black and Hispanic. This is only 0.2% of all U.S. CUs and about 1.5% of each group so it has little effect on the numbers. Their data appears to more closely match that from the Black group so whenever possible it is included with them. This is a first indication of the impact of Race in U.S. society. Race/Skin Color is more significant than ethnicity.

The White, not Hispanic group obviously takes a much bigger bite out of the Pet Spending Pie. Let’s see how their spending compares at the CU level for Total Pet and the 4 industry segments.

Race/Ethnicity is a big factor in Pet Spending. Let’s take a closer look at the other key drivers behind the numbers.

The chart below shows the key CU demographics that drive increased Pet Spending. Regarding Race/Ethnicity, people have no choice in what group they are included. In the other categories they can affect what segment that they are in. The graph shows the biggest spending group in the demographic category along with their Share of Pet spending and Share of CU’s. Then we divide share of spending by share of CUs. This “Performance” allows us to compare the relative importance of the demographic categories.

The chart shows only Total Pet Spending. However, while the performance numbers may vary slightly between segments, all of these demographic groups are important in all areas of Pet Spending.

Now let’s break down these key demographic factors in terms of Race/Ethnicity.

The chart shows the average number or share for U.S. CUs compared to that for each of the Racial/Ethnic Groups

In light of this situation, we’ll focus on comparing White, not Hispanic to Hispanic and Black American CUs.

In terms of the Best Spending Demographics, you can see why White spending far exceeds Hispanics and especially Black Americans. Now, let’s take a look at some of the worst spending groups in terms of Race and Ethnicity.

These 5 groups are the worst performing in terms of pet spending in their category.

When we look at the varied rates of Pet Spending, one obvious question comes to the forefront. What is the percentage of Pet Ownership? For an unbiased answer we again turn to a Government resource – HUD, The Department of Housing and Urban Development. With the help of the Census Bureau, every two years HUD conducts the American Housing Survey to measure the current state of housing in the U.S. In the 2017 Survey of over 70,000 H/Hs they included a specific section on Disaster Preparedness to assess the state of readiness across the U.S. in the event of a disaster – natural or manmade. A series of questions was both relevant and significant for the Pet Industry. They asked if respondents had a pet and if so, would they need assistance in evacuating the animal in the event of a disaster? This is obviously relevant to the industry but also significant in that the U.S. Government officially recognized that our Pet Children are an integral part of U.S. households. Their only reason for asking the question was to help insure that communities are adequately prepared to protect and save all members of their community – people and pets.

The next graph shows the results of the question regarding pet ownership by racial/ethnic groups. There is a bonus as they also include Native Americans as a separate group. The numbers are lower than what you have seen from industry sources but don’t be distracted. The key is to focus on the relative differences between groups. 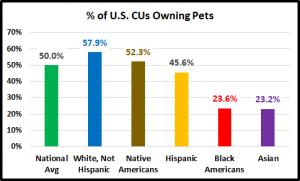 From all this data, we see that there is a definite Racial/Ethnic disparity in pet ownership and pet spending. This is not the fault of the Industry. It is just a reflection of the extreme inequality in the current American Society. Black Americans are at the bottom of the ladder, with no clear route to the top without major societal changes.

So far, we have looked at the industry from the consumers’ perspective. What is the situation when we start looking up the distribution chain? Are Blacks, Hispanics and Asians represented in participating Pet Industry Companies. I’m not aware of any data that measures the racial/ethnic breakdown of Pet Company employees. However, the Annual Business Survey from the Census Bureau does track ownership by race/ethnicity for businesses with employees that qualify for this measurement. Larger Companies generally don’t fit the parameters but there are still thousands of small businesses that do. Let’s look at a few business types that are directly tied to the Pet Industry. This data is from 2017.

The chart below shows the percentage of Racial/Ethnic ownership in 3 Pet Business types and the number that qualify.

Note: We were once again able to further define the data to include Native Americans. FYI – In 2017 they accounted for about 0.9% of U.S. CUs.  The numbers for each group will not total 100% because the owners of a small percentage of businesses are from multiple racial/ethnic groups.

The Pet Industry is not the cause of the racial/ethnic inequality in the U.S but it certainly reflects the situation, especially for Black Americans. Let’s start with consumers. Due to socio-economic factors, Black Americans have an incredibly low level of pet ownership. This obviously suppresses spending, but it could even be a matter of health. HABRI is constantly offering evidence of the health benefits of Pets. The recent COVID-19 crisis has revealed that the overall health of Black Americans is the worst of any group. Programs should be developed to encourage and assist in increasing the level of pet ownership by Black American Households.

In terms of Industry Participants, minority representation is even more limited. There are no Blacks on any of the 3 Industry Organization Boards. That’s to be expected. You have to first be a member before you can be on the Board. Programs should be developed to encourage and aid minority Pet businesses of all kinds. Existing businesses should also take a look at their current staff and actively work for more diversity.

To solve a problem, you must first recognize its existence. Then take action to solve it. Racial/Ethnic inequality is definitely a problem in the Pet Industry. That means that it is also an opportunity. Let’s get to work!