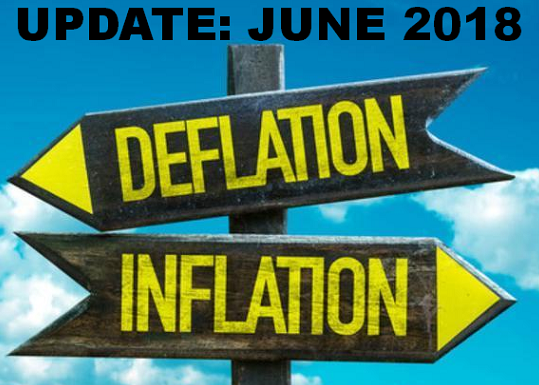 Does price matter in Pet Spending? Currently, it is the primary factor in 75% of all consumer buying decisions and household income is the most influential demographic in Pet Spending so I think that we can safely say that price matters. However, petflation can have a distinctly different impact on different industry segments. For example, the cumulative effect of years of strong price inflation in Vet Services has caused a reduction in frequency of Vet visits and 74% of the revenue increase since 2009 is from price increases. Also, the Pet Supplies segment has become increasingly commoditized and sales are driven up or down from even minor changes in the CPI.

Needless to say the retail marketplace has become a competitive battleground, unlike any time in our history. The ongoing fight for the consumers’ $ is between manufacturers, brick ‘n mortar retailers and retail channels, which now includes the internet. It is literally a “free for all” to fulfill the consumers’ need for Price, Convenience and Selection.

In this report we will update both our long range view of petflation and take a closer look at what has happened in the most recent 24 months as of June 2018. We will look at individual industry segments but we will also compare their performance to the overall market and some other relevant industries.

We will try to make this number intensive report more palatable by presenting the data in graph form, followed by brief commentaries. In our first graph we’ll look at the path of petflation since 2007. Certain numbers have been included to better illustrate key trends in specific industry segments. The numbers that are “boxed” in red indicate deflation from the previous period. 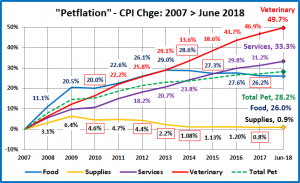 Now let’s look at the most recent 24 months in much greater detail – month to month!

Thus far, we have focused solely on the CPIs for the Pet Industry. Let’s see how they compare over time to the National CPI and other relevant industries. The next chart compares the CPI change from 2009, a pivotal year, to June of 2017. 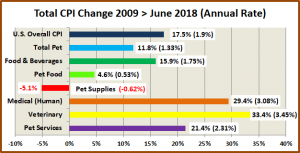 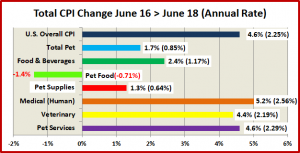 A Final thought and a question. We have noted some unusual pricing trends in recent months. However, the most significant one may be what has happened in the first half of 2018. Prices in every segment increased, especially in the second quarter. This included spectacular increases in Supplies and Services. How will this affect consumer spending? Will we see a significant drop as consumers cut back on $ or frequency. We’ll just have to wait and see.