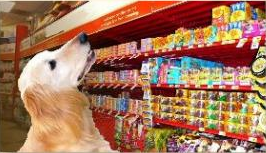 Price has always mattered but it has truly come to the forefront in the consumers’ mind since the great recession. In this report we will review the latest “Petflation” trends for all industry segments but we will also take a look back in time 10 years to 2007, before the economic crisis struck. Let’s see what has changed and how we got to where we are today.

The following chart graphically shows the annual CPI change from 2007 to today – Ytd May of 2017. 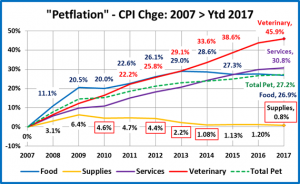 As you can see, in the Post-Recession world, price can make a huge difference in consumer spending behavior. Now let’s take a closer look at the recent history of “Petflation”. The following chart documents the monthly change in CPI by Industry segment over the last 24 months, from May of 2015 through May of 2017.

In the past 24 months we have 2 trends that may have long term significance.

Thus far, we have focused solely on the CPIs for the Pet Industry. Let’s see how they compare over time to the National CPI and other relative industries. The final chart compares the CPI change from 2009, a pivotal year, to May of 2017. 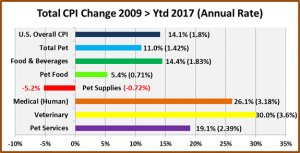 That wraps it up for this Petflation update. We’ll check again when the Spending numbers for 2016 are released.