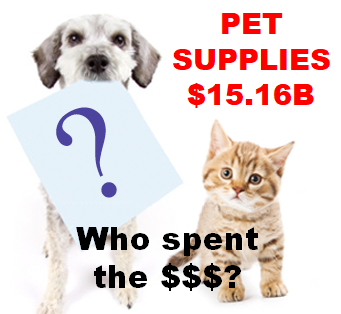 Next, we’ll turn our attention to Pets and Supplies. We’ll see definite differences from Pet Food as the spending in the Supplies segment is more discretionary in nature. There are other factors too. Spending can be affected by the spending behavior in other segments, especially Food. Consumers often trade $ between segments. However, the biggest factor is price. Many supplies categories have become commoditized so pricing changes (CPI) can strongly impact Consumers’ buying behavior in this segment. In the 2nd half of 2016, deflation began, and Supplies started a 24 month spending lift, totaling $4.97B. Prices turned up in mid-2018 due to new tariffs and Supplies $ fell a record -$2.98B in 2019. In 2020 prices fell in the Spring but most Supplies weren’t considered a pandemic necessity, so sales continued to drop, -$1.65B.

Let’s see which groups were most responsible for the bulk of Pet Supplies spending in 2020 and the $1.65B decrease. The first chart details the biggest pet supplies spenders for each of 10 demographic categories. It shows their share of CU’s, share of Supplies spending and their spending performance (Share of spending/share of CU’s). The Age group is different from Total Pet and Food. It’s younger, especially from Food. The categories are presented in the order that reflects their share of Total Pet Spending. This highlights the differences in importance. All 10 of the groups have over a 60% market share. The big difference is we only have 5 groups with performance over 120%, down 2 from 2019. That’s the same as Total Pet but 3 less than Pet Food. Higher income and # of Earners are the 2 most important categories but Supplies spending, unlike Pet Food, is becoming a little more balanced across many demographics.

Pet Supplies spending skews younger than both Total Pet and Food. The spending decrease continued in the pandemic  as consumers focused on needs rather than the more discretionary Supplies. They often traded $ as the groups with the biggest increases in Food had the biggest decreases in Supplies $. Also, the drop from 7 to 5 groups with 120+% performance indicates reduced disparity between segments.

Almost all of the best and worst performers are those that we would expect. In Pet Supplies spending, there are only 3 that are different from 2019. That is 3 less than Total Pet and 7 less than Pet Food. It is actually the lowest number for any Industry segment. As we move deeper into the data, we will start to see even more differences between the Industry Segments. Changes from 2019 are “boxed”. We should note:

In 2019, Tarifflation caused a record $2.98B drop in Supplies spending. 2020 brought the pandemic and pet parents focused on “needs” so the more discretionary Supplies segment fell $1.65B. In the chart, there are 7 repeats from 2019 – 2 winners and 5 losers. 2 segments switched from last to first or vice versa. This is far less turmoil than last year when there were only 2 repeats but 9 “flips”. There is another improvement. In 2019 all segments in 9 of 12 categories spent less. In 2020, there was only 1 – Regions. Back in 2017, the good old days, every segment in 10 categories increased spending. In the 1st year of the pandemic the spending decline has slowed but not stopped. Here are the specifics:

We’ve now seen the winners and losers in Pet Supplies Spending $ for 12 Demographic Categories. In 2020, the pandemic priorities caused the spending decline which began in 2019 to continue. However, things got a little better. In 2019, only 3 of 96 segments had increases and 9 of 12 categories had no segments that spent more on Supplies. In 2020, 18 segments spent more and only 1 category had no segments with an increase. In performance, we saw many expected winners and 10 of 12 were the same as 2019. However, not every good performer can be “the” winner and some of these “hidden” segments should be recognized for their performance. They don’t win an award, but they deserve… 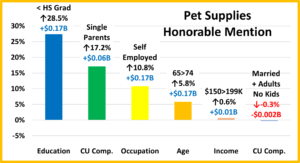 In 2019, all numbers from these segments were negative. In 2020, 5 are positive but all merit some recognition in a tough, pandemic year. Most are unexpected and a very eclectic mix. Those without a High School diploma had a good year, including in Pet Supplies. Single Parents are perennial losers. In 2020 they demonstrated that they are also committed to their Pet Children. 2020 was the year of “bosses”, especially self-employed. They spent more in every industry segment and had the largest increase of any occupation in Total Pet Spending. In many categories the Pet Supplies spending leaders were virtual opposites. Age was one of these as the 65>74 yr-olds stood with the 25>34 yr-olds in spending more on Supplies. The high income $150>199K is certainly no surprise. Their increase is truly minimal, but they were the only income segment other than $40>49K group to post an increase in Supplies $. That brings us to Married Couples w/Other Adults but No Kids. They didn’t quite make it to the plus side but were very close. 2020 was a bad year for Pet Supplies. However, it was a slight improvement over 2019.

While Pet Food spending has shown a definite pattern, Pet Supplies have been on a roller coaster ride since 2009. Many Supplies categories have become commoditized and react strongly to changes in the CPI. Prices go up and spending goes down…and vice versa. Supplies spending has also been reactive to big spending changes in Food. Consumers spend more to upgrade their Food, so they spend less on Supplies – trading dollars. We saw this in 2015. In 2016 the situation reversed. Consumers value shopped for Food and spent some of the “saved” money on Supplies.

That brought us to 2017. Both Supplies and Food prices deflated while the inflation rate in both of the Services segments dropped to lows not seen in recent years. Value was the “word” and it was available across the market. Perhaps the biggest impact was that the upgrade to super premium Food significantly penetrated the market. This could have negatively impacted Supplies Spending, but it didn’t. Supplies’ spending increased in 93% of all demographic segments.

2018 started out as expected with a $1B increase in Supplies and a small lift in Food. Then the government got involved. In July the FDA issued a warning on grain free dog food and spending dropped over $2B. New tariffs were implemented on Supplies and spending flattened out then turned down $0.01B in the 2nd half. Because of shipping timing, the full retail impact of Tariffs was delayed until 2019 when spending fell -$2.98B, affecting 97% of all demographic segments.

Among the demographic categories in which a consumer has some control, Higher Income & Marriage are still very important while Homeownership and Higher Education lost ground. In 2020 Income stayed on top and # of Earners and being a “boss” grew in importance. Supplies Spending also skewed a little younger.

The 2019 decline due to Tarifflation slowed but continued in 2020. 88% of the best/worst performers in 2019 kept their position in 2020. The pandemic caused consumers to focus on needs. That resulted in big spending lifts for Food and Veterinary and big drops in Supplies and Services. Pet Parents traded $. The best illustration of this is that 8 of the 12 segments with the biggest decrease in Supplies $ had the biggest increase in Food and/or Veterinary $. Some good news is that Supplies spending became more balanced. The performance gap between best and worst narrowed by 10.25%.

Prices are still important in Supplies $. They deflated in the spring of 2020 and stayed down until Mid-yr 2021 when they turned up again. We’ll see how this trend impacted spending in the more normal environment of 2021.

Finally – The “Ultimate” Pet Supplies Spending CU consists of 5 people – a married couple, with an oldest child over 18. They are 45>54 yrs old. They are White, but not of Hispanic origin. At least one has an Advanced Degree. Both of them work in their own business and one child just started a part time, after school job. They’re doing well with an income over $200K. They live in a small suburb, adjacent to a big city in the Western U.S. and are still paying off their mortgage.