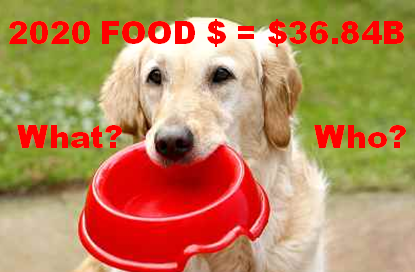 As we continue to drill ever deeper into the demographic Pet spending data from the US BLS, we have now reached the level of individual Industry segments. We will start with Pet Food, the largest and arguably most influential of all. We have previously noted the trendy nature of Pet Food Spending. In 2018 we broke a pattern which began in 1997 – 2 years up then spending goes flat or turns downward for a year. We expected a small increase in 2018 but what we got was a $2.27B decrease (-7.3%). This was due to the reaction to the unexpected FDA warning on grain free dog food. A pattern of over 20 years was broken by 1 statement. The grain free warning lost some credibility and spending rebounded in 2019, +$2.35B (+7.1%). In 2020 the market was hit by an even bigger outside influence – the pandemic. The impact varied by segment. In Pet Food, it created a wave of panic buying out of fear of shortages, resulting in a $5.65B (18.1%) lift.

First, we’ll see which groups were most responsible for the bulk of Pet Food spending and the $5.65B increase. The first chart details the biggest pet food spenders for each of 10 demographic categories. It shows their share of CU’s, share of pet Food spending and their spending performance (Share of spending/share of CU’s). 3 groups are different from Total Pet – 45>74, < College Grads & the newly created “I’m the Boss” group. The categories are presented in the order that reflects their share of Total Pet Spending. There is one big difference. In 2020 Pet Food spending, older age produced a higher share than higher income. While higher Income performed better in Food, it finished 2nd in importance to being “a boss”. The importance of higher education also plummeted. While Pet ownership is widely spread across demographic segments, in 2020 Pet Food spending was much more targeted in virtually all categories. As you will see in our analysis, that target was older, less educated but still with a high income – younger Baby Boomers. In 2019, Pet Food accounted for 65% of Pet Products $ and 40% of Total Pet. In 2020 the Food share rose to 70.8% in Products and 44.0% of Total Pet. The pandemic caused Pet Parents to focus on “needs” and at the top of that list was Pet Food.

Only 7 of the big spenders for Pet Food are the same as those for Total Pet and they generally performed better in Food. This is a marked contrast from past years. In 2020, Pet Food Spending grew $5.65B and all 7 of the matching groups gained in both share and performance. Pet Food spending became much less balanced which is best illustrated by the need for 3 new big groups and the fact that the performance of 8 of the groups exceeds 120%.

Many of the best and worst performers are the ones that we would expect but 2020 produced some surprise winners – <College Grads, Homeowners w/o Mtges, Married, Oldest Child 6>, 4 People CUs, and 1 surprise loser – College Grads. There are 10 that are different from 2019. This is 3 more than last year and 4 more than for Total Pet this year. Changes from 2019 are “boxed”. We should note:

There are just 3 repeats from 2019 so 21 of the 24 segments (88%) are new, including 5 that flipped from 1st to last or vice versa. The winner and loser in Education and Housing are surprising but the biggest trend to note is the size of the increases in the winners. This shows the overall increase in Pet Food spending in 2020 was not widespread like 2019 but rather driven by very specific groups. Here are the specifics:

We’ve now seen the “winners” and “losers” in terms of increase/decrease in Pet Food Spending $ for 12 Demographic Categories. 1n 2019, the rebound lift from the FDA warning was widespread. In 2020, the big spending lift due to the pandemic occurred in very specific segments. Most of America remains firmly committed to high quality Pet Food. However, super premium Food comes with high prices, so income has grown in importance in Pet Food spending. I suspect that the internet and value shopping will become even more important in this segment. We have identified the winning segments in performance and $ increase but they were not alone. Not every good performer can be a winner. Some “hidden” segments should also be recognized for performance. They don’t win an award, but they get… 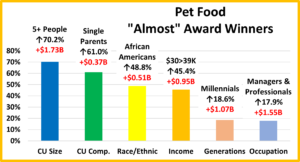 5+ Person CUs came in 2nd to 4 person CUs but this is also representative of the movement in food spending to larger CUs. Single Parents have the lowest performance in the category, but it is improving. African Americans have the lowest income and lowest percentage of pet ownership, but they are still committed to the wellbeing of their Pet Children. In recent years, Millennials have led the way in Pet Food spending trends. Their behavior was then followed by their Boomer parents. In 2020, the situation was reversed as many got on board with the move by the older group. Managers and Professionals have very high income and often lead the way in spending trends, especially in the era of super premium foods. In 2020, they finished second behind the incredible lift by the self-employed group.

Pet Food has been ruled by trends over the years. The drop in 2018 due to the FDA grain free warning broke a pattern of 2 years up followed by 1 year of flat or declining sales which had been going on since 1997. This trendy nature increased with the first significant move to premium foods in 2004. The Melamine crisis in 2007 intensified the pattern and resulted in a series of “waves” which became a tsunami with the introduction of Super Premium Foods.

In 2018 we were “due” a small annual increase in Pet Food and spending in the first half was up $0.25B. Then the bottom dropped out as spending fell $2.51B in the second half in reaction to the FDA warning on grain free dog food. It turned out that the big decrease in pet food spending came directly from the groups who had fueled the big 2017 increase. This turmoil was illustrated by the fact that 71% of the demographic groups with the biggest change in Pet Food $ switched from first to last or vice versa from their position in 2017.

That brought us to 2019. The impact of the FDA warning faded as there was little evidence to back it up. Pet Parents either returned to Super Premium or chose even higher priced options. Supplement $ also grew as the health and wellbeing of their Pet Children remained the #1 priority. Pet Food $ grew $2.35B with 75% of demographic segments spending more. Education became less important but income and related categories mattered more. Pet Food Spending became a little less demographically balanced in 2019 and the 2020 Pandemic accelerated this trend. Fear of shortages led to binge buying and a $5.65B increase. This behavior was driven by very specific groups, including 55>64 yr old Boomers, Self-Employed & Managers, Homeowners w/o Mtges, $100>149K incomes and less populated areas. This spending disparity was manifested in the fact that the performance of 8 of 10 big spending groups exceeded 120% while 49% of all segments spent less. The retail market strongly recovered in 2021. We’ll see if/how this impacted Pet Food $.

Finally – 2020’s “Ultimate” Pet Food Spending CU is 4 people – a married couple, with at least 1 child over 18. They are 55>64 years old and White, but not of Hispanic origin. Neither graduated from college but they both work in their own business. They earn $100>$150K but have paid off the mortgage on their house in a rural area in the Midwest.