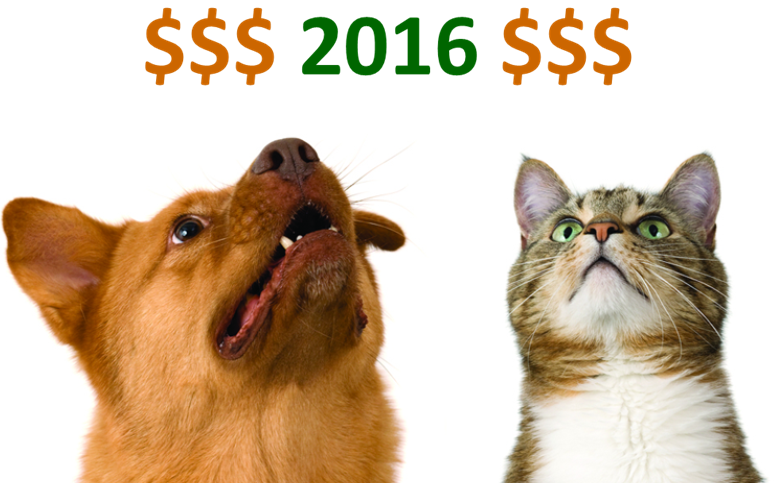 The Total U.S. Retail Market in 2016 reached $5.5 Trillion dollars – up $172B (+3.2%). This is significantly better than last year’s (+2.3%). In 2016, the decline in Gas prices slowed but still caused a $25B drop in Gas Station revenue. At the same time, the increase in Auto and Restaurant sales also slowed. For this report, we will focus on the “Relevant Retail” Total – removing Restaurants, Auto and Gas Stations from the data. This still leaves us with $3.3 Trillion to “divvy up”.

In a recent report we reviewed the 2016 sales performance of the Top 100 U.S. Retailers. That covered the “Headliners” but everyone can’t be a headliner. How are specific Retail Channels performing? We’ll start with a market overview and then work our way down.    (Base Data is from the U.S. Census Bureau Retail Trade Report)

Also, Please Take Note: As you are reviewing this detailed data and wondering exactly how does all this relate to Pet Products sales, consider these 2 facts from the 2012 U.S. Economic Census:

The U.S. retail market has grown each year since 2012. It is just a matter of how much. In 2015 the precipitous drop in Gas prices had a huge impact on the overall market. Restaurants have shown accelerating growth but dialed it back in 2016. Auto sales are still strong but the growth is slowing. Our “Relevant Retail” Segment has been the most consistent. As expected, its 3.6% growth is below the 4.2% increase of the Top 100 Retailers. However, it will serve as a benchmark as we review the individual channels. Above 3.6%, a channel is gaining market share; Below 3.6%, they are losing share. 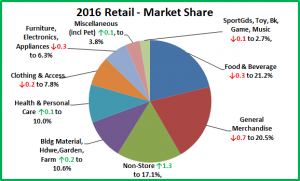 These are large slices of the U.S. Relevant Retail pie. Three divisions – General Merchandise Stores, Food and Beverage and Non-Store account for 58.8% of the total. This is up slightly from 58.6% in 2015. The increase is all from Non-Store Retailers. The other two major segments are losing share. All are very important to the Pet Industry. In our analysis of Pet Products Sales based upon the 2012 U.S. Economic Census, these three major divisions produced 59.7% of total Pet Products sales. Consumers spend a lot of money in Pet Specialty Stores but Pet Products are also “on their shopping list” in the outlets where they spend most of their money.

Because they are so huge, major Divisions of the market generally don’t show much movement in market share in just one year so the changes in General Merchandise, Non-Store and Food & Beverage are very significant. Each of the major divisions includes a number of sub segments. For example, General Merchandise includes Traditional Department Stores, Discount Department Stores, Supercenters and Clubs as well as $ and Value Stores. These specific retail channels can have even greater movement in share because this is the level that the consumer “views” when making their initial shopping choice. Change at this level is where any ongoing consumer shopping migration first becomes apparent.

With that overview, we’re ready to drill deeper into the data. Let’s look at the 2016 performance of some of the specifically “Pet Relevant” Channels to see which are doing the best…and worst in gaining consumer spending. Eleven of the twelve were chosen because they generated at least 1% of the Total Pet Products (food & supplies) spending in the last Economic Census – 2012. I have also included Traditional Department stores on the list even though they have never truly embraced Pet Products. They have long been a fixture in the U.S. Retail Marketplace. Their continued decline, as consumers migrate to outlets which better fit their needs, has profoundly affected U.S. retail shopping as generally they were the “anchor” stores for the Shopping Malls across America.

We will use 2 separate graphs to illustrate the situation in these Pet Relevant Channels. The first will show the % change in sales in 2016 vs 2015. The next will “show us the money” by translating the % into $ gained or lost. Then we will have observations on each segment

Remember, you must be up at least 3.6% or you’re losing market share! 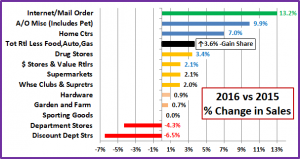 The leader comes as no surprise. However, 9 of 12 these pet relevant channels, including some huge ones, are losing market share. In the next chart, we’ll “show you the money!” Remember, the Total increase for the “Relevant Retail” Market was $116B and you must be up 3.6% PLUS $3.3B just to gain just 0.1% in Market Share.

The relative growth in the Internet/Mail Order Channel is even more pronounced when you look at the change in $ spent!

The chart below puts the Market Share of each of these segments for 2016, 2015 & 2014 in a visual format so that it is easier to appreciate the relative sizes. Growth in share since 2014 is indicated by a green box, a decline is boxed in red.

Pet Stores remain #1 for Pet Products. However, in the Overall Market, there are 3 Olympic Medalists. In 2016 the gold still belongs to Supermarkets. As you recall, in 2015 we saw the race for the Silver between SuperCenters & Club Stores and the Internet/Mail Order segment really “heat up”. In 2016 that race was all over. Internet/Mail order took over 2nd place in March and continued to pull away. They have now set their sights on the Gold, which has been held for many years by Supermarkets. Amazon, the largest retailer in the segment, has indicated that they will now actively pursue the fresh grocery business. In fact, they recently purchased the Whole Foods Supermarket Chain to facilitate that effort.

Overall, 2016 was similar to 2015 – with a 3.6% increase, up slightly from 3.5%. Once again the Internet/Mail Order Channel provided most of the excitement and 49.4% of the growth. The big increase by the A/O Miscellaneous Channel, which includes Pet Stores and other smaller format retailers, seemed to reinforce a less publicized consumer trend to more personalized shopping. After years of growth, the $/Value Stores segment may have plateaued but the big negative was the increasingly sharp decline in sales by Discount Department Stores – down -$6.9B in 2016 and  -$9.1B since 2014.

The U.S. Retail Market continues to grow and evolve as the consumer migrates to the channels which best fulfill their current wants and needs. This is not a new phenomenon. It has always been that way. Currently, the “Channel of Choice” is Internet/Mail Order and the movement is accelerating. Traditional Brick ‘n Mortar stores will not go away but they must adapt as “electronic” is on track to become the dominant force in U.S. Retail even sooner than we expected. 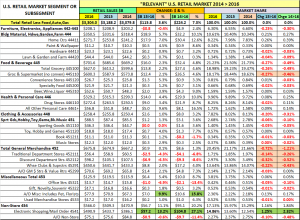