This means to get the full picture in our monthly channel update we need to look at the latest release of both reports. We will begin with the Final Retail Report from March and then move to the Advance Retail Report for April. This will also allow us to better track the consumers’ evolving spending behavior in terms of channel migration.

We’ll start with the March Final report. This was the first month of the crisis. The impact is very visible. First, we will look at some major retail groups. (Note: The Data in all graphs is Actual, Not Seasonally Adjusted)

It looks just like the Advance report projected a month ago. All 3 of the groups that are down in YTD $ were up at least 8% through February. March is the start of the traditional Spring lift, but not in 2020. If you can’t go out, you don’t think about a new car. It also doesn’t matter how cheap gas is if you aren’t driving.

The “Relevant” retail is the only positive and we know that it is being driven up by binge/panic buying of necessities. Food is the biggest driver. If you can’t go out to eat, you cook at home.

Now, let’s see how some Key Pet Relevant channels were doing in March. 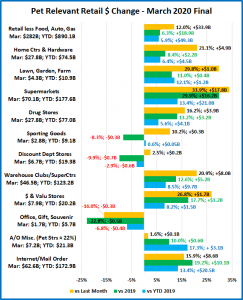 March was certainly a terrible month for retail spending, the biggest Total Retail $ drop in history. Binge/panic buying buoyed up the Relevant Retail sector but that is temporary and non-essential business closures became widespread by the end of the month.  We’ll see what a full month of shuttered doors brings. Here are the Advance numbers for April.

March was terrible, with the biggest spending drop in history. However, it was nothing compared to April. It is obvious that a full month of stay at home and business closing orders had a huge impact across the Retail Marketplace.

Restaurants – Spending was up $9B through February, +8.1%. In March Social Distancing began and many restaurants closed. Spending fell $18B, turning a $9B increase into a $9B decrease. April brought a full month of the restrictions and spending plummeted, down $31B, -49% vs 2019. Many restaurants are offering delivery and curbside pickup, but this can’t replace eating in restaurants. This group is now down $40B YTD.

Automobile & Gas Stations – If you can’t go out, except for necessities, then your car becomes less of a focus in your life. Buying a car is definitely less of a priority. Auto Dealers, both new and used, are trying to combat this with some fantastic deals and a lot of advertising. It doesn’t seem to be working. In terms of Gas Stations, prices are down sharply but as we have said, it doesn’t really matter much how cheap gas is if you’re not driving.

Relevant Retail – Less Auto, Gas and Restaurants – Many non-essential businesses were forced to shutter their doors in March. However, there was also a rash of binge/panic buying as consumers literally battled over toilet paper and sanitary wipes. The closure of restaurants, schools, and businesses, along with many people now working from home caused a big lift in home cooking. This drove up spending at Supermarkets, SuperCenters and Warehouse Clubs. These 2 factors overcame the impact of closures and Relevant Retail Spending in March was up 6.3% and YTD 5.9%, +$49B. Then came April, with a full month of closures. Plus, while grocery spending continued to be strong, the bingeing and hoarding slowed markedly. Spending dropped $43B, -13.4% from March and cut the YTD growth in half. However, the YTD, +2.1% for Relevant Retail is the only positive number in any measurement for any of the big groups on the entire graph.

Now let’s look at what is happening in the individual retail channels across America. In April, spending turned down in Relevant Retail. Let’s see if we can find any positives. These groups are less defined than in the Final Monthly reports and we will look all across the whole market, not just pet relevant outlets. 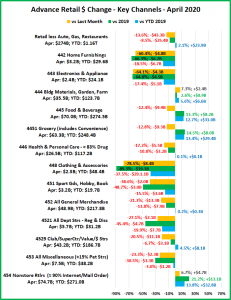 A full month of stay at home resulted in few “winners” and the impact on the “losers” is even more pronounced.

You quickly see that the negative impact from a full month of stay at home, closures and reduced discretionary spending was widespread. Only 3 groups had positive numbers for April:

The panic/binge buying of March ended in April as spending fell in all but 2 groups – Nonstore and Bldg Materials.

General Merchandise Stores – April also wiped out the overall YTD gains of GM stores. Regular Department stores are closed, and discount department stores continued their downward sales trend. Club/SuperCtr/$ stores had provided the only positive note. In April consumers dialed back their panic buying and Spending on discretionary items was also down significantly. This combination of factors drove sales down 6.7%, -$3.1B vs April 2019 in this largest GM group.

Food and Beverage, plus Health & Personal Care Stores – The initial March wave of binge/panic buying in March ended in April. The Grocery segment is still being driven by increased Food sales, up 14.5%, +$8B. However, sales in the Health, Personal Care group turned down, essentially wiping out the previous YTD gains. While Drug Stores are essential, many Personal Care stores are shuttered.

Clothing and Accessories; Electronic & Appliances; Home Furnishings – Some Electronic stores are deemed essential but most of the other stores in these groups are not. All saw a huge 60+% drop in sales but Clothing stores took the biggest hit, down 89.3%, -$19.1B from 2019. Even before the crisis, their online sales were growing, but not enough.

Building Material, Farm & Garden & Hardware – This channel has its biggest spending lift in the Spring. With many consumers sheltering in place, their focus has turned to their needs at home, including house and yard repair and improvement. Their spending pattern is the closest to “normal” of any brick ‘n mortar group. The Spring lift is apparently still “on” as their sales are up 7% over March, 2.6% over April 2019 and 5.6% YTD.

Sporting Goods, Hobby and Book Stores – Many Book and Hobby stores have been classified as non-essential, but most Sporting Goods stores are open. They also usually have a big spending lift in the Spring. However, with organized sports on hold, many parks closed, and non-essential travel discouraged, the need for products in the sporting goods arena is greatly diminished. This group was down 24% in March, but the decline increased in April – Down $3B, -48.7% vs 2019.

All Miscellaneous Stores – This group is mostly small to medium specialty stores – both chains and independents. While Pet Stores are essential, most other stores in this group are not. In March, YTD sales for this group were up solely because of a spectacular early year performance by the All Other Subgroup, which includes Pet Stores. In April this was not enough to overcome a full month of closures as Sales for All Miscellaneous Stores were down across the board.

NonStore Retailers – 90% of the volume of this group comes from Internet/Mail Order/TV businesses. In April, the ongoing movement to online accelerated. They were up 12.1% in March. Their April increase was 21.2%, +$13.1B. They took over the lead from Grocery Stores in all sales measurements regardless if it is in $ or % increase. Two things are significant. Unlike many other channels that had a big lift in March, their $ sales didn’t fall off in April. They were 6.7% higher. Also, their YTD sales are up 13.8%, exceeding their 12.9% annual increase in 2019. This early year lift bodes well for 2020 as much of their annual lift is usually driven by Christmas Holiday spending, which is still to come.

Recap – April clearly shows the huge fundamental impact that the COVID-19 pandemic has had on the American way of life and consumer spending. The impact is also evolving as we saw the panic buying in March end in April. As the situation continues, spending will no doubt move back to a more routine pattern – a new normal. No one knows how long the current situation will last and what long term impact it will have on U.S. consumers’ spending behavior. We will continue to monitor the data and provide you with regular updates as the situation evolves.