In May 2020, the Retail market began its recovery after hitting bottom in April. The road back has been long and complex and Consumer spending behavior continues to evolve. Now, the virus is resurging so we will continue to track the impact on the recovery of the retail marketplace with data from two reports provided by the U.S. Census Bureau.

The Reports are the Monthly Retail Sales Report and the Advance Retail Sales Report. Both are derived from sales data gathered from retailers across the U.S. and are published monthly at the same time. The Advance Report has a smaller sample size so it can be published quickly – about 2 weeks after month end. The Monthly Final Report includes data from all respondents, so it takes longer to compile the data – about 6 weeks. Although the sample size for the Advance report is smaller, the results over the years have proven it to be statistically accurate with the final monthly reports. The biggest difference is that the full sample in the Final report allows us to “drill” a little deeper into the retail channels.

We will begin with the Final Retail Report for July and then move to the Advance Retail Report for August. Remember, the retail impact of the pandemic began in March 2020, peaked in April, then recovery started in May. We will compare 2021 to both 2020 and 2019 to document the progress that the retail market has made towards a full recovery.

First, the July Final. Retail hit bottom in April 2020 but began recovery, hitting record $ in December. $ fell in January & February but they took off in March, setting a new all time $ record. In April $ fell but they rebounded in May to another record high. June & July saw more dips. Here are the major retail groups. (All Data is Actual, Not Seasonally Adjusted)

The final total is $3.3B less than the Advance report projected a month ago. All groups were down slightly. The specifics were: Relevant Retail: -$2.1B; Gas Stations: -$0.2B; Restaurants: -$0.4B; Auto: -$0.5B. Sales vs June were down in all but Gas Stations and Restaurants. Total Retail $ were the 3rd highest month of all time. Total $ales broke $600B for the 1st time in December and has now done it 7 times. Auto still has the strongest recovery and is in fact prospering – annual YTD growth rate since 2019 is +12.8%. Except for the spending dips vs June, for the second consecutive month all groups, including Restaurants, were positive in all other measurements.

Now, let’s see how some Key Pet Relevant channels were doing in July. 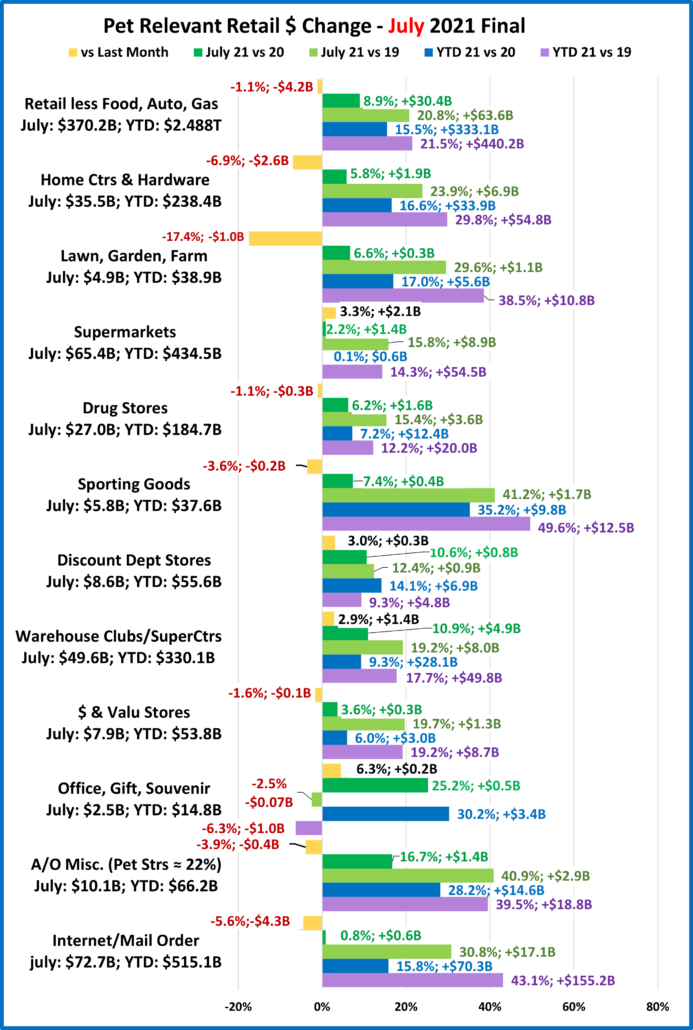 Relevant Retail began recovery in May and reached a record level in December. $ fell in Jan & Feb, turned up again in March and began a monthly up/down rollercoaster. July $ are down but virtually all channels are showing growth. The key drivers are the Internet, SuperCtrs/Clubs/$ Stores and Hdwe/Farm. Now, the Advance numbers for August.

2020 was a memorable year for both its traumas and triumphs. In April & May we experienced the 2 biggest retail spending drops in history, but the problems actually began in March. Retail sales began to recover in June and in October, YTD Total Retail turned positive for the 1st time since February. In December, Total Retail broke the $600B barrier – a historic first. Sales fell from their December peak in both January and February but still set monthly sales records. Then they took off again in March, setting a new monthly sales record of $633B. April sales were down slightly but they took off again in May to set yet another spending record, $643.1B. June>August $ fell but August was still the 5th biggest $ month in history. Auto, Gas Stations and Restaurants were down from July, but all the major groups were positive in all other measurements for the third straight month. Some other areas of the economy are still suffering, some spending behavior has changed, and inflation has become a factor in some increases. However, consumers continue to spend “big bucks”, especially in Relevant Retail, and the overall Retail marketplace continues its strong recovery.

Total Retail – In March, Total Retail hit $633.1B, a record for the most spending in any month in any year. In April, $ales dipped to $625.5B but were still $218.3B more than April 2020 – a record increase that was more than double the size of last year’s record drop. In May, sales set another new record, $643.1B. June>August sales dipped slightly but August was $629.1B, the 5th biggest month in history. Moreover, the current YTD average annual sales growth rate since 2019 is 9.0%, the highest ever in records going back to 1992. Total Retail has not just recovered. It is stronger than ever.

Auto (Motor Vehicle & Parts Dealers)   – Staying home causes your car to be less of a focus in your life. Sales began to fall in March and hit bottom in April. Auto Dealers began combating this “stay at home” attitude with fantastic deals and a lot of advertising. It worked. They finished 2020 up 1% vs 2019 and have returned to a strong positive pattern in 2021. The “attitude” grew amazingly positive in March and slowed only slightly in April>August as sales exceeded $127B in all 6 months – the 6 biggest months in history. To show how well consumers responded to their campaign you just need to look at the data. This group has exceeded $110B in monthly sales only 15 times in history. 12 of those occurred after the onset of the pandemic.  YTD Avg Annual Growth Since 2019 = +11.8% – the best performance of any big group.

Gas Stations – Gas Station $ales have been a mixed bag. If you drive less, you visit the gas station less often. Sales turned down in March 2020 and reached their low point in April. They moved up but generally stayed about 15% below 2019 levels for the rest of 2020. In February they were still behind 2020 in monthly and YTD $ but ahead of 2019 in both measurements. In March, sales skyrocketed and continued to grow in April > July to a record $53.5B. They fell in August but are still +36% from 2020. They have been positive in all measurements vs 2019 & 2020 since March. Their comeback continues but there is another factor that must be considered – inflation. Gas prices can be pretty volatile. They dipped in the first 2 months of the pandemic but then returned to more normal levels for the balance of 2020. They began strongly inflating in 2021. In fact, the August 2021 prices were 42.7% above 2020. That means that the 36.2% year over year $ lift in August was actually a decrease in the amount of gas sold. YTD Annual Avg Growth Rate Since 2019 = +4.5%

Relevant Retail – Less Auto, Gas and Restaurants – This is what we consider the “core” of U.S. retail and has traditionally accounted for about 60% of Total Retail Spending. When you look at the individual channels in this group, you see a variety of results due to many factors – non-essential closures, binge buying, online shopping and a consumer focus on “home”. However, overall, April 2020 was the only month in which spending in this group was down vs 2019. Monthly $ales exceeded $400B for the first time ever in December ($407B). They finished 2020 up $260B, +7.1%. Their performance was the only reason that Total Retail was able to finish 2020 with positive numbers, +0.5%. Sales fell in January and February but set monthly records. In March they turned sharply up and then down in April. They bounced back in May then fell in June & July. In August sales rose again and it was the 5th largest month on record. We should also note that that while December 2020 is still #1, March > August are six of the eight highest $ months of all time. The Relevant Retail Market has exceeded $366B in monthly sales 8 tImes in history. 7 of those have occurred since the onset of the pandemic. It is also very important that the Relevant Retail group has posted positive numbers versus last year and YTD for every month since April 2020 and their average YTD growth rate since 2019 now stands at +10.1%. In August Department Stores “got on board” so all channels are now positive in all measurements vs both 2020 and 2019. However, the primary drivers throughout the pandemic were and continue to be Nonstore, Grocery, SuperCenters/Clubs/$ Stores plus an exceptionally long 2020 “spring lift” from Hardware/Farm and Sporting Goods.

Now let’s look at what is happening in the individual retail channels to see where the $ are coming from. August $ were up slightly from July but none of the increases were “off the charts”. However, it was still the 5th largest month in history for Relevant Retail outlets. The groups are less defined than in the Final Monthly reports and we will look across the whole market, not just pet relevant outlets. 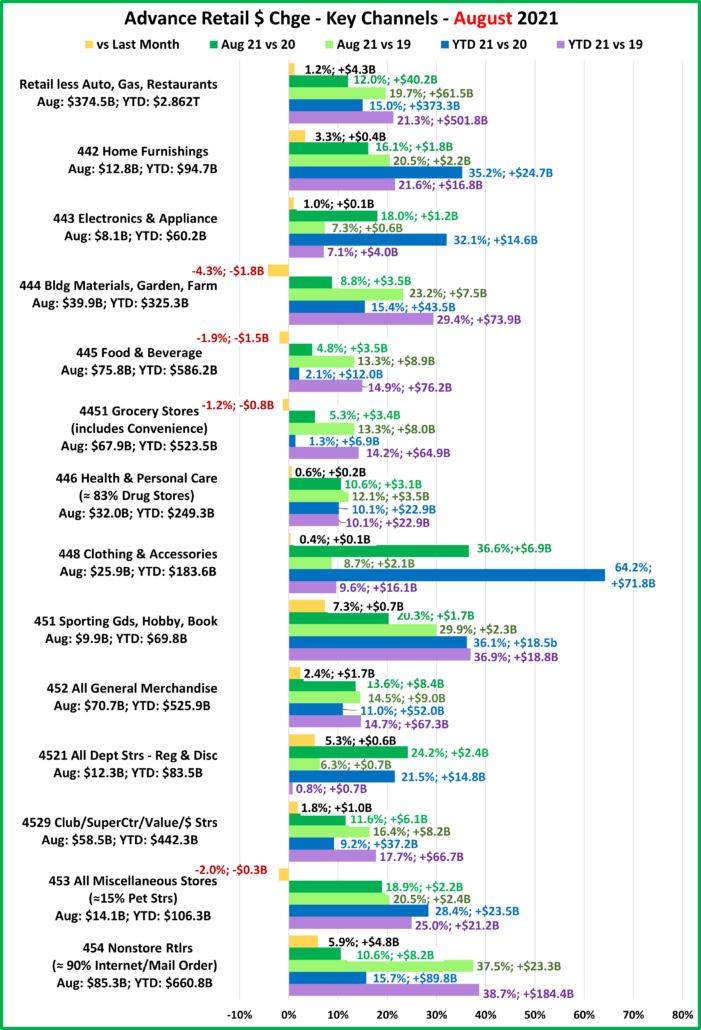 After hitting bottom in April 2020, Relevant Retail has now beaten the previous year’s $ for 16 consecutive months. The group set an all-time record of $407B in December and finished 2020 +$260B vs 2019. 2021 started strong, with record sales in every month. March > August were 6 of the 8 biggest of all time. Essential channels are still the primary drivers:

General Merchandise Stores – Sales rose in August and all other numbers are positive. Even Department Stores $ are now finally all positive. After dipping to +7.5% in February, the growth rate by Club/SuperCtr/$ stores has remained near the current 8.5%. These stores are still the key to this channel.

Clothing and Accessories; Electronic & Appliances; Home Furnishings – March > August have been spectacular for all these channels. The increase in Clothing vs August 2020 was not “off the chart” but was still +36.6%. All of these groups were up vs July and they remained positive in all measurements vs 2020 or 2019 for the 6th consecutive month.

Building Material, Farm & Garden & Hardware – Their Spring lift began on time in 2020 but may be finally slowing. They have greatly benefited from consumers focusing on their home needs. They finished 2020 +53B (+13.8%). Sales took off in March, set a record in April then trended down May > August. They are still +15.4% YTD. Avg Annual Growth = +13.6%

Sporting Goods, Hobby and Book Stores – Book & Hobby stores are open but Sporting Goods stores have driven the lift in this group. Consumers turned their attention to personal recreation and sales in Sporting Goods outlets took off. The group ended 2020 +5.5% vs 2019. The growth accelerated in 2021. January > August set monthly records and August was the 2nd biggest month in history. August YTD they are +36.1% vs 2020. Avg Annual Growth = +17.0%

All Miscellaneous Stores – Pet Stores were deemed essential but most other stores were not, so closures hit this group particularly hard. Sales hit bottom at -$3.8B in April then began to rebound. They finished with a strong December and ended 2020 -$1.0B, -0.7%. In March sales took off and reached the $14+B level in May and they have stayed there. Sales fell -2.0% in August but their YTD sales are now 28.4% above 2020 and 25.0% more than 2019. Their recovery has become very real. YTD Avg Annual Growth = +11.8% (4th Best)

Recap – 2020 was quite a year. April & May had the 2 biggest year over year sales decreases in history while December sales broke $600B for the first time. 2021 may become even more memorable. March>August became the 6 biggest $ales months in history with the 6 largest year over year monthly sales increases ever. The total increase was +$783B, which totally dwarfs the -$174B decrease from March>May 2020 which caused so much concern. At yearend 2020, Restaurants and Gas Stations were still struggling but Auto had largely recovered. Relevant retail had segments that also struggled but overall, they led the way for Total Spending to finish the year +0.5% vs 2019. 2021 has grown even more positive. In June > August all major groups are positive vs both 2020 and 2019. The details show that the recovery in Relevant retail has become real for virtually all channels and monthly sales continue to set records. Retail has recovered and so far the resurgence of COVID has not negatively impacted Retail. We’ll keep checking.