The current health crisis, with its stay at home restrictions, has resulted in many business closures and generally disrupted the U.S. Retail Marketplace. As consumer spending behavior evolves, we will regularly track the changes and migration between channels. We will do this with data provided by the U.S. Census Bureau.

The Census Bureau constantly gathers sales data from retailers across the U.S. and publishes the results every month. Two reports are released approximately mid-month. They are the Advance Retail Sales report and the Monthly Retail Sales report. The Retail Sales Report is more detailed and includes data from all respondents, but it is published about 6 weeks after month end. The Advance Report is released at the same time and gives a quick look at the most recent month. The sample size for the advance report is smaller so it doesn’t drill as deep into the channels, but the results have proven to be statistically accurate with the final monthly reports.

We will publish monthly updates covering both reports. They will include:

Let’s get started with February. This data is from the Final Report and will show us the status of the retail market before the crisis. First, we will take a look at some major retail groups. (Note: All Data is Actual, Not Seasonally Adjusted)

February traditionally has the lowest retail spending of any month. We are just coming off of the holiday season, including Christmas closeout buying in January but it is still mid-winter, so the Spring spending lift has not begun.

As you can see, February spending went well with all of these groups having a strong performance vs 2019. The Year to Date numbers were also very positive. The relevant retail group (less Auto, Gas & Restaurants), which most impacts the Pet Industry, was up 5.7% YTD. This pace was significantly higher than 2019’s 3.7% annual increase.

Everything was looking good. Let’s see how some Key Pet Relevant channels were doing. 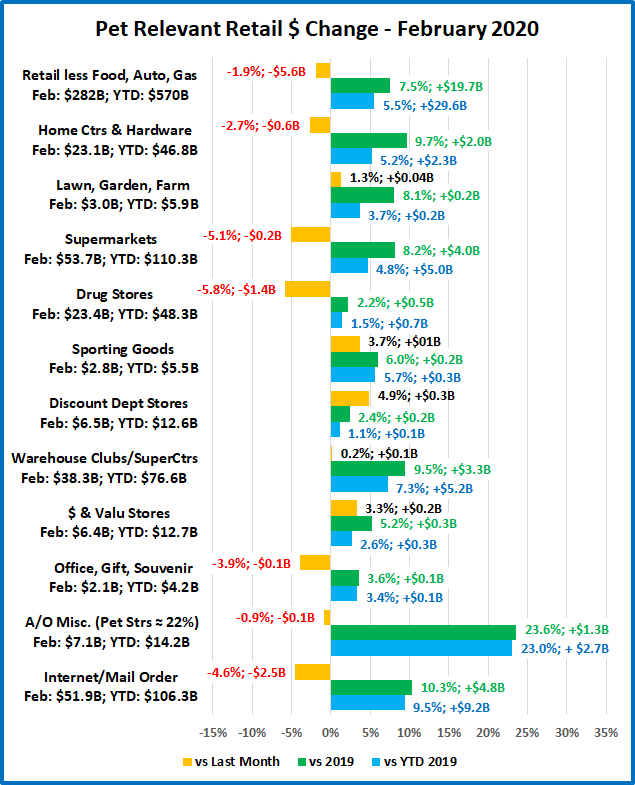 February was certainly a strong month for retail spending. If we were not in the current health & business crisis, the numbers would bode well for a record spending year in 2020. However, we are definitely in an unprecedented situation. Let’s see the advance numbers for March.

This is certainly a big change from February.

Total Retail – Overall retail spending fell $36B, -7.0%. This is the largest one month year over year decrease since they began doing the survey in 1951. Sales were still up from February which gives us an indication of just how big the March lift is in a normal year.

It is readily apparent where the stay at home and business closing orders were having the maximum impact.

Restaurants – Spending for the month was down 25%, $16.4B from 2019. Remember this segment was up $10B, 8.8% YTD in February. One month turned it completely around. Obviously, delivery and pick up can’t make up the difference from the widespread ban on eating in restaurants.

Automobile & Gas Stations – Obviously, if you can’t go out, except for necessities, then your car becomes less of a focus in your life. Buying a car is less of a priority and it doesn’t matter much how cheap gas is if you’re not driving.

Relevant Retail – Less Auto, Gas and Restaurants – Although many non-essential businesses were forced to shutter their doors in March, overall, this segment showed strong growth in the month. There was a double digit increase in spending over February and sales vs March 2019 and YTD 2019 were also up sharply. Building upon the strong February lift, this group is up 5.3% for year to date spending over 2019. That is 43% greater than their 3.7% annual increase in 2019. Undoubtedly, much of the lift was due to binge spending on necessities, from hand sanitizer and cleaning products to toilet paper. However, the closure of restaurants, schools, and businesses, along with many people now working from home caused a lift in home cooking. This necessitated increased spending at Supermarkets, SuperCenters and Warehouse Clubs. This should continue but the binge shopping will fade as routines become more stabilized.

Now let’s look at what is happening in the individual retail channels across America. Spending is up in Relevant Retail. Let’s see which groups are winning and losing. These groups are less defined than in the Final Monthly reports and we will look all across the market, not just pet relevant outlets. 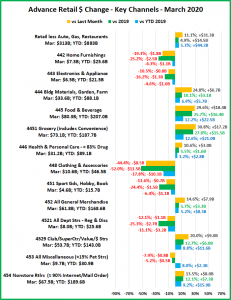 The positive or negative impact of the COVID-19 crisis is readily apparent.

Sales are either up or down, across the board – vs last month, last year or year to date, with 1 exception – Miscellaneous Stores. This group still has a YTD increase vs 2019 due to strong early year performance by the All/Other Misc. subgroup.

While the plus or minus rule is generally true, the reasons behind it are often somewhat cloudy. In most states businesses were deemed essential or non-essential, which dictated if and how that they can remain open. Food and drug stores are obviously essential everywhere, but many other groups fall into a grey area. Also, some general merchandise stores were allowed to stay open, but could only sell essential products. Let’s take a brief look at the results. When possible, will bundle them into larger groups.

General Merchandise Stores – Overall, their increase vs last year is slightly above normal at 5.7%, +$3.3B. SuperCenters, Clubs and $ stores all provide necessities and are showing a strong 12.7% increase. However, in many areas they are prevented from selling non-essential products. Department Stores are a mixed bag. The Discount Stores are open at least for necessities but the traditional Department Stores are closed, which drove a big decrease in spending.

Food and Beverage, plus Health & Personal Care Stores – Grocery stores are obviously essential and driven by the initial wave of binge, necessity spending. Their 27%, $15.5B increase over 2019 is the largest of any channel. Liquor stores are also essential, and they are showing plus numbers too. While Drug Stores are essential, many Personal Care stores are shuttered. The Health, Personal Care increase is higher than usual, but the lowest of any of any positive performing group.

Clothing and Accessories; Electronic & Appliances; Home Furnishings – Electronic stores are generally deemed essential but most of the other stores in these groups are not. Clothing stores took the biggest hit, down 52%, -$11.5B from 2019. We should note that even before the pandemic, consumers bought 30% of their clothing online.

Building Material, Farm & Garden & Hardware – This channel has its biggest spending lift in the Spring. With many consumers sheltering in place, their focus has turned to their needs at home. One of these is obviously house and yard repair and improvement. Their March sales are up 10.1%, +$3.5B over 2019.

Sporting Goods, Hobby and Book Stores – While many Book and Hobby stores have been classified as non-essential, most Sporting Goods stores are open. They also usually have a big spending lift in the Spring. However, with organized sports on hold, many parks closed, and non-essential travel discouraged, the need for products in the sporting goods arena is greatly diminished. Together, this group is down 24% versus March 2019.

All Miscellaneous Stores – This group is mostly small to medium specialty stores – both chains and independents. While Pet Stores are essential, most other stores in this group are not. The only reason that their YTD sales are up is because of a spectacular early year performance by the All Other Subgroup, which includes Pet Stores.

NonStore Retailers – 90% of the volume of this group comes from Internet/Mail Order/TV businesses. This channel is up 12.1%, +$7.3B in March. This puts them second only to Grocery in terms of the size of their March increase. This is no real surprise as spending has increasingly moved online in recent years. In fact, the 12.1% increase is actually smaller than their 12.9% annual increase in 2019. However, it is unusual, coming this early in the year, as much of the annual lift is usually driven by Christmas Holiday spending.

Recap – The COVID-19 pandemic has had a fundamental impact on the American way of life and consumer spending. When you look at the winners and losers you see a common theme. The winners are focused on home and necessities. The losers are truly placed in the discretionary category, at least for now.

Much of the initial lift was undoubtedly caused by panic buying, out of fear. As the situation continues, spending will no doubt move back to a more routine pattern. No one knows how long this will last and what long term impact it will have on U.S. consumers’ spending behavior. We will continue to monitor the data and provide you with regular updates as the situation evolves.

If you would like a copy of any of the charts, just click on the individual chart. An image will appear. Right click on the image. You can then copy or save it.