In our 30 year history of Pet Stores, we tracked their rise to the top spot in pet products sales, which was largely due to the creation and rapid growth of chains and Pet SuperStores. They gained the #1 position in 1997 and have held it ever since. However, that journey has not been without challenges. They maintained a 40% market share in Pet Products in 1997 and 2002 but that fell to 33.1% in 2012 due to increased competition from the mass market. From 2012 to 2017, there was a new challenger – the Internet, but Pet Stores remained strong. They increased their share of Pet Products sales slightly to 33.3%. This was a small, but very significant gain as Pet Stores and $ Stores were the only 2 retail channels to gain market share in Pet Products $ in this 1st Internet Tsunami.

There is no doubt that that Pet Stores are resilient and a key consumer channel for Pet Parents. However, not all pet stores are the same. There is the key difference of Indies vs Chains. However, not all chains are created equal. They range from small local chains to regional to the national behemoths. In this report we will look at how these groups have progressed from 2002 to 2017, with an especially deep look at who stood their ground from 2012 to 2017 and how they did it.

Pet Store Numbers – Indies lost a little ground while the big chains are growing at a staggering rate. The small local chains (2>9 Stores) are also growing, especially the 5>9 group. The 10>24 group lost share, but they are basically in a transitional step on their way to 25+ stores. Chain Stores have more than half of all pet outlets with employees, 51.5%.

Pet Store $ales – The big chains dominate Pet Store $, 71.5%. However, $ales in the Indies and small local chains are still growing. $ales in the small chains are actually growing at a significantly higher rate than the big guys. 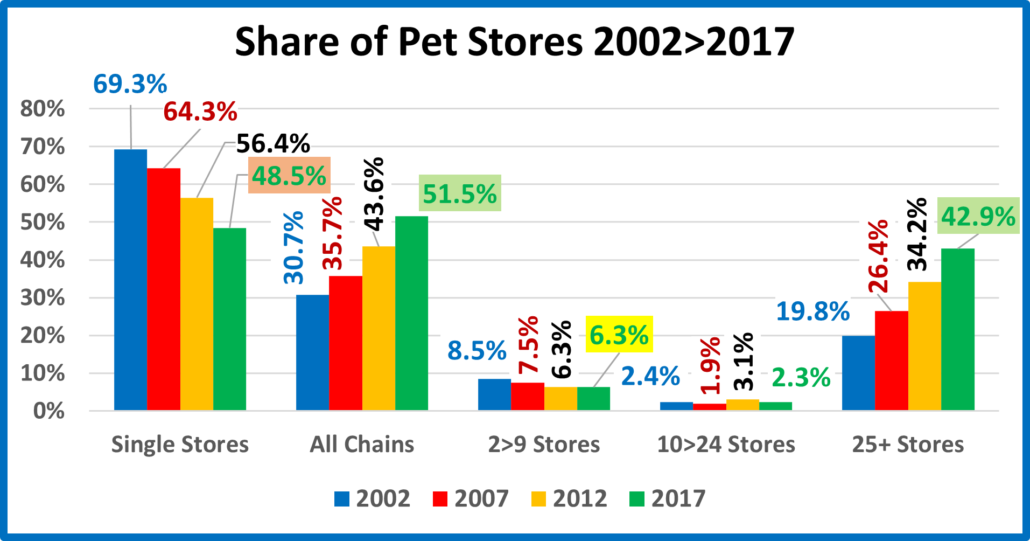 Now let’s look how the share of Pet Store $ have “evolved” over the same period. 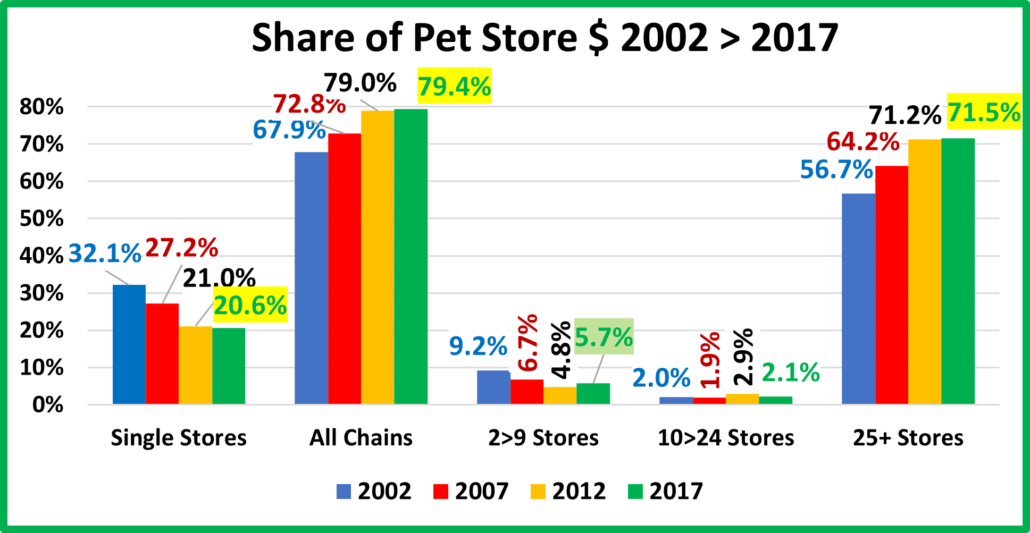 This last chart on share of $ told a similar story to the store count chart up until 2012. Then some patterns changed. This suggests that we should take a closer look at what happened between 2012 and 2017. In this next chart we look at the % change in some key measurements from 2012 to 2017 for the different groups of Pet Stores.

Before we get to the specifics for each group, we’ll comment about how each measurement relates to our “deep dive”.

Now, let’s see how the various Pet Store groups performed in these areas between 2012 and 2017.

The growth in Total $ came from both increased store count and $ per store but more stores was the biggest driver. In terms of employees, the overall model was unchanged as employees/store went from 12.0 to 12.01.

They lost some stores but radically increased the $ per store. Specialty Super Premium foods and increased consumer connection from more employees per store were factors in holding their ground in share of $.

Overall, their $ growth slightly exceeded the channels growth rate, but it was entirely driven by more stores as the average store sales fell. They also added a lot of employees but the employees per store fell significantly. One factor is that some chains began adding smaller format stores to save money and have a more personal experience.

This group represents a critical time for Pet Store owners. They have a successful store. Could they do even better if they added another location or 2.  In 2017, more companies opted in, but others continued to grow and moved up to the 5>9 group. They grew 7.4% in stores but increased the number of employees per store by twice that amount, +17.6%. This is important any time, but it was extremely important in the movement to Super Premium food. They offered the product but also had the personnel to discuss the consumers’ wants and needs. This helped drive their per store sales up 27.8%, to a level double that of Single Stores and produced a 37.3% increase in Total $.

This group had a game plan similar to the 2>4 group but with even stronger results. They added even more stores. This, in combination with increased store sales drove Total $ up 60%. They have the stores and people to be strong competition to the big chains in their local market.

This is a transitional group, on their way up. They added employees per store and increased Store sales. Their Total $ fell solely because of a 15% drop in the number of stores.

With 42.9% of the stores and 71.5% of the $, there is no doubt this is the dominant group in the Pet Store channel. Their $2.6B (+25.1%) increase was also 72.6% of the Total $ increase for Pet Stores. They are the group that allowed Pet Stores to maintain and gain in market share of pet products against the Mass Market and an Internet Tsunami. With that being said, the group continues to evolve with many new smaller footprint stores designed to give Pet Parents an even more personal retail experience. This contributed to fewer employees per store and reduced Store volume. One thing hasn’t changed. They continue to open stores at a spectacular pace.

The movement to personalize our pets really came to the forefront of Pet $ with the strong movement to Super Premium Foods which began in the 2nd half of 2014 with Millennials and then spread to Boomers and ultimately became widespread across the consumer marketplace. The big chains remain the bulwark of the Pet Store channel. However, they provided a wall of protection which allowed small, localized chains to grow and prosper. They offer a more personal shopping experience and often were the first to stock and sell some new Super Premium pet foods. You see the results of this broadened appeal in the increase in per store sales for all pet stores with fewer than 25 outlets, including Indies. The biggest % growth in store $ occurred in the 2>4 and 5>9 groups. The 5>9 store group became especially stronger with a 60% increase in Total $. The reason is twofold. They offer a personalized experience but have enough outlets in any given local market to be a convenient option for consumers. We also shouldn’t forget the progress of the 2>4 Store group. I did a year long investigation of Pet Stores 3 years ago to validate the numbers. I found that a large number of new independents entered the market, but over the course of the year, over 8% of existing indies “closed their doors”.

The chain stores, big and small, lost virtually no outlets. There is a lesson here, that is almost as old as humanity but also applies to retail pet stores. “There is safety in numbers!” It just takes 2 or maybe 5 or you could move up to 15. After that the sky is the limit! Chain stores began in the 90’s. The big guys will remain dominant but there is room for all sizes!

There is another classification of Pet Stores that has come more to the forefront….

Let’s take a closer look. These stores are either owned by the Franchisee or the Franchisor.

About 1 in every 9 Pet Stores is a Franchise outlet but they take in only 1 of every 13 dollars spent at U.S. Pet Stores. Franchisee Owned lead the way in number of stores, but Franchisor Owned stores produce more $.

These are the same key measurements, just for groups most relevant to franchises, including their biggest competitor.

Being on top creates a lot of pressure. They had a huge $ increase from opening more stores. Their percentage increase in $ was actually, even smaller than Indies, who closed 2.5% of their stores. They were the only group to have drops in Average Store $ and the number of employees per store.

Their growth rate in stores and Total $ was basically triple that of the whole Pet Store channel. The growth rate for Average Store $ was slightly behind the rate for Indies but it was 70% higher in actual $. They also led the way in employee increases and broke the 10 employee per store “barrier”.

Although they lost some share to Franchisor Owned stores, they are still 62.1% of all Franchise Stores. They had significant growth in all measurements, but the store level execution of the Franchise business model can vary between stores producing a lower growth rate. In many ways the business behavior of these stores is more like that of an enhanced Independent Store. They have the 2nd lowest Store $ and number of employees per store. Both these measurements are 30+ higher than Indies and 30+% lower than Franchisor Owned stores. The growth in stores is promoted and driven by the Corporation and the increase in store $ over an independent store likely comes from the impact of the store Brand name and the Franchise business model.

Like the big regular chains, this group made a commitment to store growth. They increased the number of stores by an amazing 90%. This combined with a 16% increase in store $ produced a 121% increase in total $. Not to rain on their parade, but their average $ per store is still slightly below the $1.84M for Total Pet Stores and 43% lower than the $3.22M for Non-Franchise Chains. Their 22% growth in employees per store should also come with an (*). They have the lowest annual pay per employee for any group, even 29% below that for Indies, and it fell -6.8% between 2012 and 2017. It is likely that they have a high and growing percentage of part-time employees.

That wraps up our look at Franchised Pet Stores. We saw that Franchisee owned stores outperform Independent Stores, but Franchisor owned significantly outperformed them in store $ and growth. True performance is the share of $ divided by the share of stores. A score of 100+% means that a group is “earning their share”. Performance provides us a method to compare the subsets of Franchises to the subsets of store count. We will end our Pet Store analysis with this graph: 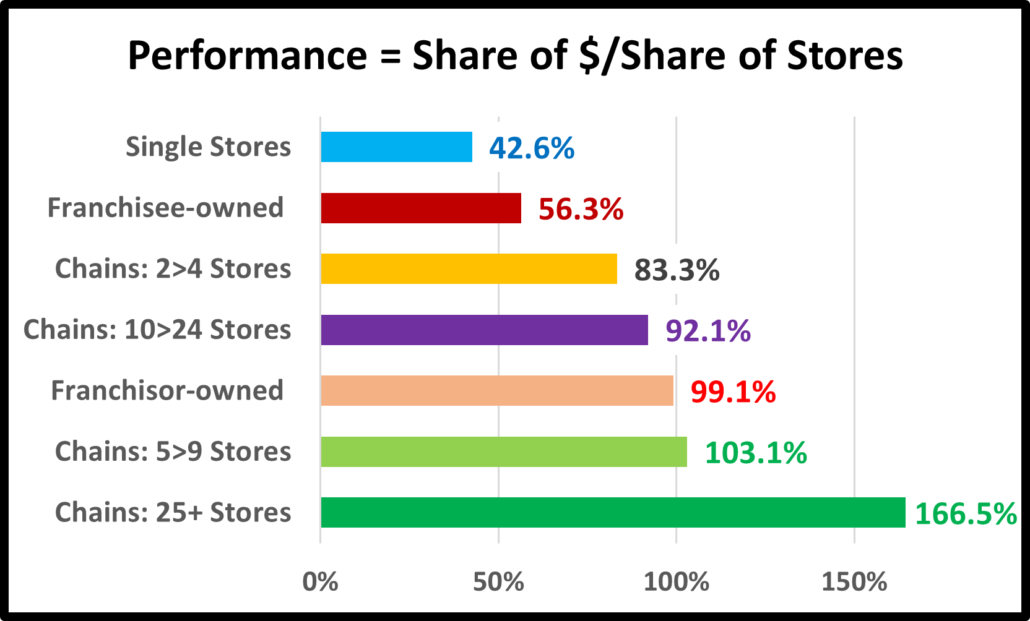 As expected, singles are the worst performers. If you’re considering opening a store, buying a franchise might offer more success. If you already have a successful store, should you open another? The answer appears to be yes. There is safety in numbers and greatly improved performance in the 2>4 group. Now comes the big question. Do you have the will and the resources to become a “force” in your local market? If so, then go for it. The 5>9 store group is 1 of only 2 groups performing above 100%. They even outperform the Franchisor owned group. The final step to 25+ stores is difficult and open to few. You first transition to 10>24 stores, where you learn the challenges of attaining regional success in possible anticipation of a national goal. That goal is truly “gold” as 25+ are the best performers and responsible for Pet Stores holding their ground in 2017 vs the Mass/Internet.