Pet Products are sold seemingly everywhere today – 160,000 retail outlets of all kinds – clothing stores, supermarkets, gas stations, the internet. That number climbs to over 200,000 when you add in the services outlets. However, when you think of the beginning of this colossal industry, you must think of the independent pet store as the seed that became the mighty oak. We will take a look back to 1987 to see where this channel was and how it has evolved through the years.

The data in this report is courtesy of the U.S. Census Bureau. Their Economic Census is done every 5 years in years ending in “2” and “7”. The early years have only basic information but since 1997, more detailed information is readily available. In 2017 they did change some classifications which will make a few comparisons no longer possible.

Let’s get started. Here is a detailed chart on some key measurements and a graph of their growth from 1987 > 2017.

The little chart has a wealth of information, and the graph shows the spectacular overall results. First, the number of stores almost doubled but the key factor was that the sales per store is 7.4 times greater. The number of stores increased but superstores and chains became the dominant type. This is evident by the fact that the number of employees per store is 2.3 times more in 2017 than it was in 1987. Add this to the attitudinal conversion of pet owners to pet parents, with an ever increasing personification of their pets and you get 13.5 times more $. 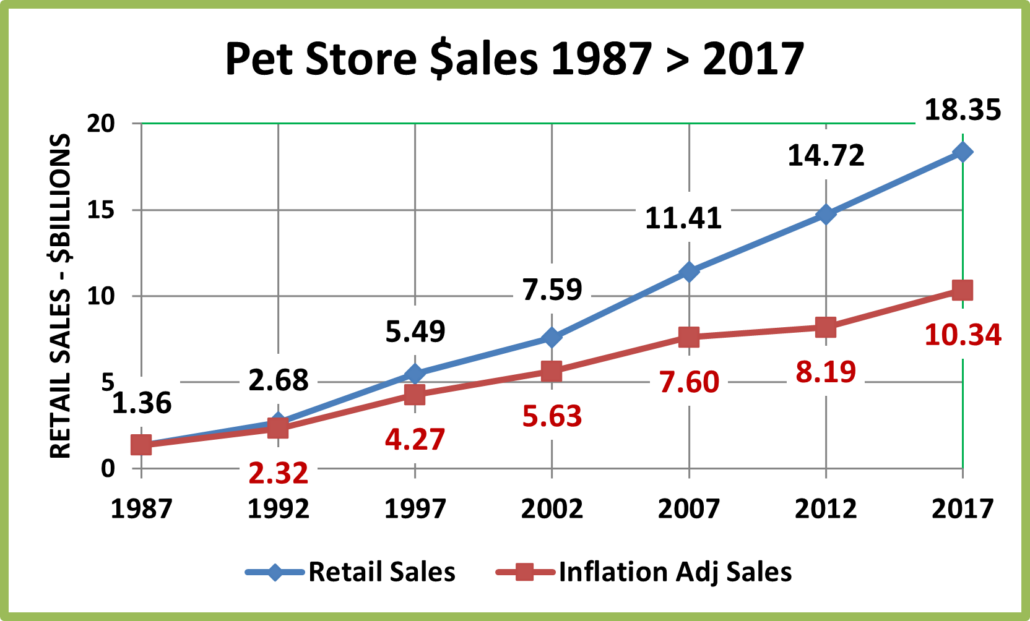 The annual growth rate in “full” $ was 9.0% from 1987 to 2017. Pet Food and Supply prices went up 77.5% during this time. This is an annual inflation rate of 1.9% which is better than the overall 2.6% CPI rate during this period. This made the “real” growth rate 7.0%. That’s damn good and means that 77.3% of Pet Store $ growth has been real. However, this doesn’t tell the whole story. On the chart you see that real growth flattened from 2007 to 2012. This was largely due to the fact that Pet Food and Supply prices increased an incredible 17.0%. (8.2% per year) from 2007 to 2009. Coming at the onset of the recession, this drove consumers to look for value. The result was that consumers moved strongly to other channels. Pet Stores’ share of total pet products sales fell from 39.0% in 2007 to 33.1% in 2012 and Total General Merchandise took over the top spot in Pet Products sales. All the Food and Supply prices have fallen or at least flattened out since 2009. Total Pet Products inflation from 2009 to 2017 was 1.1%, an annual rate of 0.13% – almost nothing. As a result, “real” sales for Pet Stores returned to a more normal path.

Now, let’s take a look at the progress of the key contributing factors over the years in 5 year segments.

Through the years, pet Stores have grown larger in size but paused their growth in numbers from 2007 to 2012, largely due to the great recession. During this recession period, their growth in revenue slowed to +29% and did not kept pace with the overall market in the Pet Food and Supplies category, so they lost some market share. However, they bounced back in the 2012 to 2017 period, with more stores and a total sales increase of 24.7% (Products $ were +27.7%). Although this was the smallest $ percentage increase in history it was very significant. The Pet Products marketplace is incredibly competitive, and a new major player is now in the game – the internet. Pet Stores, with their vast array of pet products and services and $ stores, with their value and convenience were the only 2 brick ‘n mortar retail channels to gain share in Pet Products in what was a tsunami like movement of consumers to internet shopping. It shows that Pet Stores have not lost their appeal and that they are both resilient and adaptable in changing circumstances.

Now, let’s look deeper into the retail sales numbers for Pet Stores for trends in specific Product segments. There is sales data from the U.S. Economic Census back to 1987. From 1997 on the data gets reasonably detailed. As I said the Census Bureau changed their product classification system in 2017. This will keep us from doing some comparisons to earlier years. However, I have built a chart which is inclusive of both systems to maximize our ability to compare specific data.

The chart contains all available data. The 2017 numbers are highlighted to indicate the % change from 2012.

Here are the details which are followed by specific category observations for each 5 year period.

Pet Stores pioneered the pet industry but they also led the way in trends that have spurred the spectacular growth of the industry since 1987. The rise of superstores and chains provided unprecedented space for Pet Supplies. This was important for existing manufacturers but it was especially important for new companies. There was finally retail space for a “flood” of new products. According to the US BLS Consumer Expenditure Survey, in 1987 Pets Supplies accounted for 13.9% of Total Pet Spending. Then came Pet Superstores and chains. By 1996 the Pet Supplies share of Total pet $ was 23.5%. It has remained near this level ever since. Although larger Pet Stores showed the way, this spurred a radical expansion of pet product distribution across the whole retail marketplace. Another key industry trend was the move to premium Pet Food. Pet Stores led the way again. They had the room for new premium foods, which became increasingly desired by Pet Parents. This trend began in about 2004. The 2007 Melamine recall accelerated the movement as consumers moved successively to made in the USA, then to all ingredients from the USA, next to all natural and now to super premium. Plus, you can add the latest big movement – pet health supplements, often in treat form.

Take a look at the following graph to better “see” the business impact of these trends on Pet Stores. 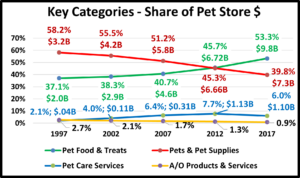 In 1997, Pets and Supplies $ dominated the channel with 58.2% of the total revenue. Food started to gain ground between 2002 and 2007 when premiumization began. They moved to the top in 2012 when overall Pet Stores lost considerable market share to other channels. Then Super Premium Foods took off and Pet Stores were the “go to” outlet. In 2017, the share of sales for Pet Food had essentially flipped from 2007. The A/O business has always been small but is now becoming insignificant. The Services Segment is small, around 6% of total revenue since 2007, but it is not insignificant. Offering Pet Services makes Pet Stores more of a one stop shopping experience for Pet Parents and is a big positive point of differentiation. This differentiation and the “one stop shopping” that it provides for Pet Parents was a key factor that allowed Pet Stores to hold their market share against the internet wave that began from 2012 to 2017.

There’s more to the story!

Larger format pet stores bundled into chains – big and small was obviously a great idea but more than that, the timing was perfect – for society, for consumer attitude and for the retail marketplace. To take a closer look at this timing, we have to go back over 75 years to the passing of the G.I. Bill in 1944. This rewarded Veterans for their service by providing education and job training benefits to help advance their after service careers. It also offered low interest home mortgages which was a major reason that the homeownership rate for the U.S. rose from 40% in 1940 to 60% in 1960. Also, more space was needed for this expansion which resulted in the creation of the suburbs, a new concept which offered the convenience of urban living with more space for households.

The soldiers returning from World War II also helped create another movement – more children. U.S. birthrates soared from 1946 to 1964, creating the largest generation – the Baby Boomers. Many of them grew up in this new suburban environment – which offered more space in a home that was owned and controlled by their parents. Pets began to be added to the household mix – sometimes in a big way. I am a Boomer. By the time that I was in 3rd grade (1956), my older brother and I had 2 dogs, 2 cats, a canary, a parakeet, a hamster and…a raccoon. In those days dogs and cats were “outdoor” animals. They didn’t come into the house but we let them take refuge in the basement during inclement weather. As we moved into our early teens, we no longer required a babysitter. While our parents worked, we roamed the neighborhood, especially in the summer. Our dogs were our constant companions. In the summer, we spent more time with them than we did with our parents. They became siblings to us so it is no surprise that when we grew up, we bought suburban homes, started families and added Pet “children” to our household.

So the changes in society and consumer attitudes were underway. However, we still needed major changes in the retail marketplace. When Boomers were growing up, Department Stores “ruled”. This channel has never embraced pet products. This indicated that they weren’t in tune with consumers and was an early sign that they would fade. In the 60’s discount stores came into being. First came general merchandise, Wal-Mart, K-Mart, Target. They grew and ultimately progressed to SuperCenters and Clubs in the 90’s. Consumers became used to large stores with a huge product selection. In the late 80’s and 90’s this concept trickled down as large format specialty stores came to the forefront – Toys R Us, Office Depot, Circuit City, Barnes & Noble, etc. Consumers were ready for Pet Super Stores.

There is one more key element – money. Income has been and continues to be the driving force in increased pet spending. Let’s go back to the key players. In 1991 the oldest Baby Boomers were turning 45. 45>54 is the highest income age group so in the 90’s, the biggest generation was entering their peak earning years. Pet Parents finally had outlets that not only filled their pets’ wants and needs but introduced new ones and… they had the money to buy it all.

The creation and development of larger format pet stores and chains was literally a positive example of the “perfect storm”. It was a great idea, all the elements were in place and the timing was perfect. Pet stores continue to evolve as the does the market. The store size has dialed back a little to make shopping a little more convenient. The channel is also not just huge chains. Small chains and local independents are also strong. The successful outlets are adapting to a virtual world, offering features like BOPIS. However, one thing will remain unchanged and that guarantees their continued success. Pets are very personal. Boomers were the first pet parents but they passed this mantle on to their children and it has now become the norm across the U.S. In fact the relationship has become even stronger as we increasingly personify our pets. This has led to substantial growth in categories like apparel but probably had its greatest impact on categories related to health. It fueled the spectacular and ever growing movement to higher quality, super premium foods and now medical supplements. Pet Parents want and need the opportunity for personal interaction when shopping for their pets, especially when considering any new product. This can only happen in Pet Stores.