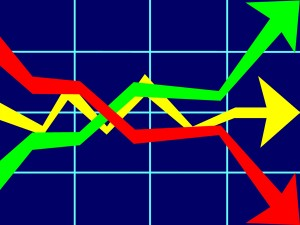 There was pricing turmoil early in the year. However, things calmed down in May and June with the Prices in all segments showing moderate increases. That set the stage for July…with a record 1.95% drop in Food prices bringing the CPI for the total industry down. What would August bring? Remember, it’s the Pet Industry. It’s always interesting.

In August Supply prices turned up and now seem to be on a positive path for the year. This was welcome news. The Service Segments are usually quiet in the Summer Months with little or no movement in prices…not this year. They both moved sharply upward. This actually mitigated another drop in Pet Food prices and prevented the prices in the Total Industry from falling for a second consecutive month. 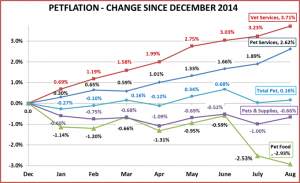 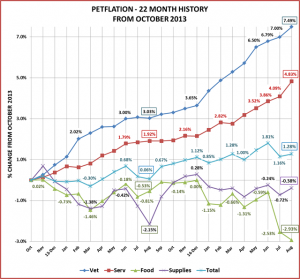 August is usually flat except for Supplies. This year it was very volatile. Service Prices had a big increase and Food continued down. This graph makes it easy to see how 2 negatives can create a seemingly positive situation as overall Total Pet prices are up 1.2% versus a year ago.

The chart below consolidates key data and compares the 2015 YTD CPI to the 2014 annual CPI. It also includes an updated projection of the annual CPI change for 2015. September and/or December could produce a drop in Food and/or Supplies but October & November are generally up…across the board. 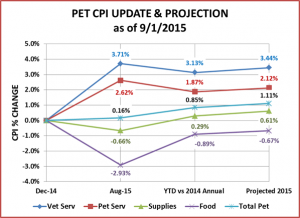 Pet Food – What can you say? The price deflation in this largest segment is the biggest news and the biggest concern in the industry. July saw the biggest single month price drop in history…-1.95%. One could expect a rebound in August which is generally the start of the “normal” Fall rise in Food prices, but food prices continued to fall. Prices are now down -2.93% since December. Right now Pet Food prices are basically equal to 2012 – three years ago. There is simply not enough time left for a recovery, so 2015 is projected to be the second consecutive year of deflation in Pet Food…down -0.67%.

In some segments, like Supplies, where much of the spending is discretionary, deflation can spur increased spending. However, buying Pet Food is not discretionary it’s a necessity which is purchased on a regular basis. Therefore, the consumer is much more likely to be influenced by retail price. Unfortunately, lower prices don’t result in an overall increase in sales. They just increase the competitive pressure on Manufacturers and retailers as the consumer searches for value.

Pets and Pet Supplies – Although prices are down 0.66% since December, we need to remember that 2014 was unusual. December was the pricing peak for the year. That usually occurs in November. We are 0.29% ahead of last year’s overall pricing and that should improve. We may still see price drops in September and even December but we’re looking at a projected increase of 0.61%

Perhaps the deflation caused by commoditization has “bottomed out”. Let’s hope so. Long term deflation is a tougher problem to solve than excessive price inflation. It’s also not solved in just one year. The segment will need moderate increases for several consecutive years.

NonVet Services – Prices have been growing steadily since April. They usually flatten out in the Summer months but not this year. In July prices went up and then August brought an even bigger jump of 0.71%. We now expect prices to increase 2.12% in 2015 but they could go higher. In 2014 they increased 2.9%. This can slow the segment’s overall growth and limit it to higher income households.

Veterinary Services – The Veterinary Services Segment is projected to be Up 3.44% in 2015. Last year prices increased 3.5%. The segment continues to grow but the increases are coming from the high income Pet Parents – $120K and above.

Total Pet Market – (The Good) Supplies appear to be turning around the deflation pattern that has persisted since the recession. (The Bad) The huge Food segment is now the biggest concern. With prices continuing a precipitous drop in August, a second consecutive year of deflation is virtually a sure thing. Deflation puts tremendous pressure on manufacturers and retailers and there is no easy fix. The Service Segments – Veterinary and Non-Vet have the opposite problem… as prices continue to spiral upward. The price deflation in the Food segment will not produce increased overall purchases because of the nature of the products but the high inflation rate in services can result in decreases in the amount of services or limiting their market appeal to higher income groups.

(The ???) The Total Pet Market is now projected to have a 1.11 increase in prices in 2015. This looks pretty good, even healthy and would indicate that the bulk of the Industry’s growth this year will be a “real” increase. However, as we have seen, it is being generated by 2 big negative, but opposite situations in Pet Food and Veterinary Services. Supplies and hopefully Non-Vet Services seem to be “coming around” to more acceptable levels but we need the other two to change their current courses.

This last chart should make it easier to compare the up/down performance of each segment: 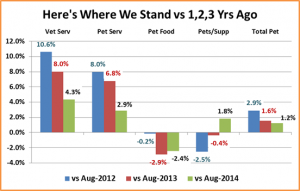 The turnaround for Supplies is readily apparent. You can also see the big deflation problem in Food over the last 2 years but especially in 2015. Of course, the sharply rising prices in the Service Segments are a big contrast to the Product Segments. In terms of pricing, the Pet Industry has been in turmoil for the last 2 years…but you would never know it if you just looked at Total Pet numbers.