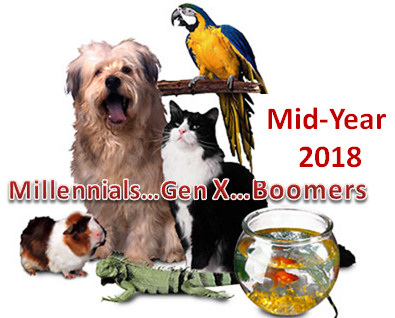 In this report we will update Pet Products Spending for arguably the most popular demographic measurement – by Generation. Baby Boomers built today’s Pet Industry, but they are getting old. What happens next? Gen Xers are next in line but most of the discussion revolves around Millennials. Last year at this time the Gen Xers had a big year. Are they still performing? What about the youngsters? Are they stepping up in life and spending? Have the Boomers still got it? Let’s take a closer look. The numbers come from or are calculated from data in the US BLS Consumer Expenditure Survey.

First, let’s define each generation and look side by side at their share of Consumer Units (H/H’s) and Total Spending.

There is the obvious difference in age to be considered and differences in behavior. However, we have also learned that there are key Consumer Unit characteristics, like income, family situation and home ownership that make a difference both in Total Spending and in Pet Spending. Let’s look at some of these key differences.

Next, we’ll compare the Generations to the National Average in Income, Spending, Pet Products Spending and Pet Products Share of Total $pending:

Now let’s look at Pet Products $ spent by Generation and their share of the total.

The increase was driven by Boomers in 2017 and  Millennials in 2018. Let’s look at individual segments. First, Pet Food

We are still seeing the impact of the 2nd wave of Super Premium in 2017. However, 2018 started off strong for Millennials while Boomers began value shopping. It could signal the beginning of a new Food trend. Now, Supplies.

2015 saw a steep drop in Supplies spending as consumers upgraded to Super Premium Pet Food and reduced the frequency of Supplies purchases. Spending flattened out in the first half of 2016 but then this segment began a magical 24 month run. Consumers began value shopping for Pet Food and spent some saved money on Supplies. There were great values to be had as Supplies prices deflated for 22 months. This combination of circumstances generated an incredible $4.97B Supplies spending lift. The increase was driven by Gen X and Boomers, +$3.62B, but the Millennials stepped up in the last year, +$0.94B. Only the Greatest Generation spent less which was due to their declining numbers.

In the final chart we will compare each generation’s share of spending on Total Products, Pet Food and Pet Supplies to their share of CU’s and see “Who is earning their share?” Then we will review their actual performance numbers.

If a share of market is outlined , then performance exceeds 100%.

A Final Word – In the 2017 mid-year update, Pet Products Spending belonged to the Gen Xers. They produced $2.33B of a $2.41B increase with a strong performance in both Food and Supplies. This year the honor should be shared between the Boomers and the Millennials. With a huge lift in Food, Boomers accounted for 85% of the spending increase in the 2nd half of 2017. Then the Millennials stepped up to provide 83% of the lift in the 1st half of 2018. Overall the Boomers won, with a $2.52B increase. The Millennials finished 2nd, +$2.0B but they win the consistency award as they spent more in both halves in both Food and Supplies. Note: An Honorable mention should go to the Silents, who also had a small lift in both halves in both segments. Overall, it was an incredible 12 months for Pet Products spending, up $5.3B.