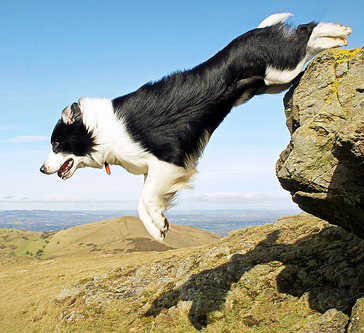 In September things were “looking up”. All segments posted increased prices – even Food and Supplies. Based upon the CPI history since the recession, we expected a calm marketplace for the balance of 2015, with moderate increases in October and November…and a possible “dip” in December. However, this is the Pet Industry where the “unexpected should be expected.”

The October CPI data was released shortly before Thanksgiving. Veterinary Prices were up slightly…no surprise. Pet Food Prices were also up…stronger than expected at 0.49%. Pet Services had a 0.24% drop in the CPI. This is unusual but helped to mitigate a 1% price increase from July to September. However, the Supplies segment gets all the headlines. October saw a price drop of 0.73%. This is the first price decrease in October since 2009, which is the month that started the deflation in this segment. It is also the biggest October drop since they began keeping records for each segment back in 1997. We’ll take a look at the impact of October’s unexpected volatility. 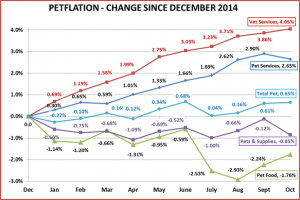 Next, let’s look at the monthly history over the last 24 months to put this month’s data into perspective. October of 2015 and 2014 are outlined so you can see the journey over the last 12 months. 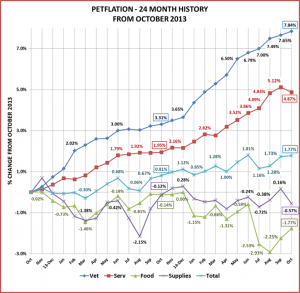 Since the recession, October has been an “up” month…until 2015. Food and Veterinary showed increases but Services and Supplies turned sharply down. This chart makes it easy to visualize our concerns. Over the last 2 years, the Service Segments are basically going steeply up while the Supplies and Food Segment are truly on a roller coaster. The prices for Food have been consistently down during the ride. Supply prices are currently lower than 2013 and 2014 but “on average” are better than 2014.

The chart below consolidates key data and compares the 2015 YTD CPI to the 2014 annual CPI. It also includes an updated projection of the annual CPI change for 2015. 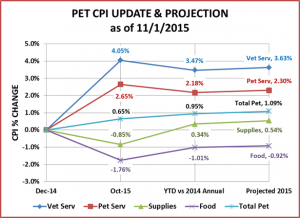 Pet Food – Since this is the largest segment in the industry, the ongoing deflation is of great concern. Prices are still trying to recover from the huge -2.35% drop in July and August. They are 1.76% below the level in December 2014 but just 2 months ago they were down 2.93%. They’re moving in the right direction. Let’s hope that they continue upward through December, like 2014 and avoid a December drop. A second consecutive deflationary year is a certainty but it would be great to keep the annual decrease under -1.0%. Right now Pet Food prices are actually -0.2% below October 2012 – three years ago. We are projecting a –0.92% decrease in the annual Food CPI.

Pets and Pet Supplies – The big drop in October certainly clouded the recovery in this segment. Prices are down -0.85% since December but the 2015 average is up 0.34% versus last year. We will definitely see an increase in the CPI for Supplies in 2015. Prices would have to drop 2.0% in the last 2 months to get to a 0.0 change. That won’t happen. The question is how much will prices increase. We need a significant increase, probably in the 0.4>0.5% range to begin to break this deflationary spiral. Right now we are projecting an increase of 0.54%, so why the concern? Two Reasons: December has shown price drops of at least 0.75% in 4 of the last 5 years. November: The last time we had a price drop in October it was followed by a -1.7% drop in November. We’ll just have to wait and see.

NonVet Services – Inflation in this segment is becoming an increasing concern. October’s decrease slowed down the acceleration. We now expect prices to increase 2.3% in 2015 but they could go higher. They are actually 2.65% above December 2014. This could slow the segment’s overall growth and limit the appeal to key price sensitive consumers, like the over 65 age group.

Total Pet Market – In September, we thought that we were seeing the “beginning of the end” of the deflation in the Supplies segment that began in October 2009. With the record price drop in October, the situation is in doubt again. It remains to be seen if 2015 will mark the end of deflation in Supplies or just a brief pause in the downward pricing spiral. A second consecutive year of deflation in the huge Food segment is a certainty. Since they began keeping records by segment in 1997, Food prices have only dropped in 2010(-0.4%), 2014(-0.3%) and 2015(-?%). Two consecutive years of deflation is not the kind of “record” that you want to set. Deflation puts extraordinary pressure on Manufacturers and Retailers and in a “need based” category like Food it doesn’t spur increased purchases. The Consumer just spends less. To break the deflation spiral, you have to improve the quality and appeal of the products. Today’s “instantly informed” consumer will pay more if a product has more benefits – a better value. Make it better!

It’s the opposite problem for the Service Segments. A high inflation rate may increase revenue but eventually it will limit the appeal resulting in a reduction in the amount of services sold. This is true for both need based and discretionary services.

The Total Pet Market is projected to have a CPI increase of 1.09%. This is moderate and certainly reasonable in today’s economy. For the Pet Industry, the Total certainly doesn’t tell the whole story. This “moderate” increase comes from extremely volatile pricing activity in the individual segments

This last chart should help compare the status of each segment over the last 3 years: 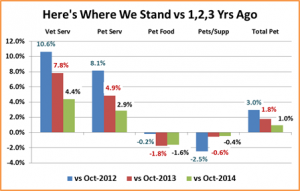 The Segments are “divided” into 2 teams – The “Ups” and the “Downs”. The Negative October clearly impacted the Supply Segment. You can also see the ongoing deflation problem in Food. Prices are still slightly below 3 years ago. The rising prices in the Service Segments are obviously accelerating in 2015 and a big contrast to the Product Segments. This chart clearly shows the turmoil in the segments that produces the very calm 1% Total Industry Inflation Rate.