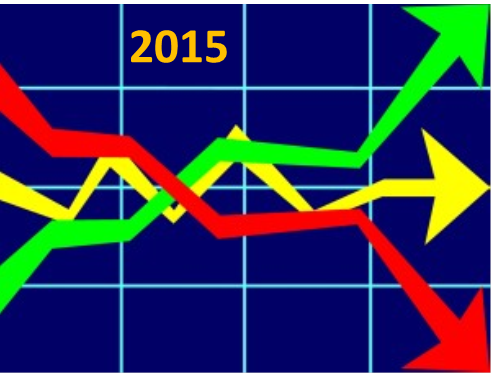 In December all Segments were up slightly, but that doesn’t tell the story of what has been a crazy year. Of course prices in the Service Segments, especially Veterinary consistently moved up. It’s the Food and Supply Segments, which account for 63% of the Industry’s business, that are the real story in 2015.

Of course, all the hard data is included in the report. However the CPI story, which includes all-time record setting drops in both Supplies and Food is best told visually. You need to see it to believe it. First…The Data 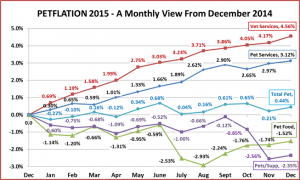 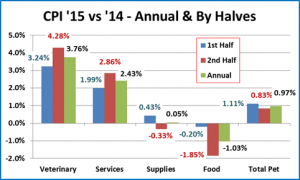 Next we’ll put the CPI numbers into a “historical” and market perspective. The following chart shows the average annual rate of change in the CPI from 1997 to 2015 for each of the Pet industry segments, Total Pet…and some comparable product groups and industries.

The Pet Industry CPI increase from 1997 to 2015, except for the Vets, seems reasonable. Let’s look deeper!

As I reviewed the CPI records, logical divisions in time seemed to stand out. The next chart shows the average annual rate of change in CPI for each Industry Segment.      Note: I also included the Overall Average from 97>15

We’ll take a look at the CPI for the first quarter of 2016 when March numbers are released in April.