Blog - Latest News
You are here: Home / Pet Market / Comparing the Spending Demographics of the Industry Segments – SIDE BY S... 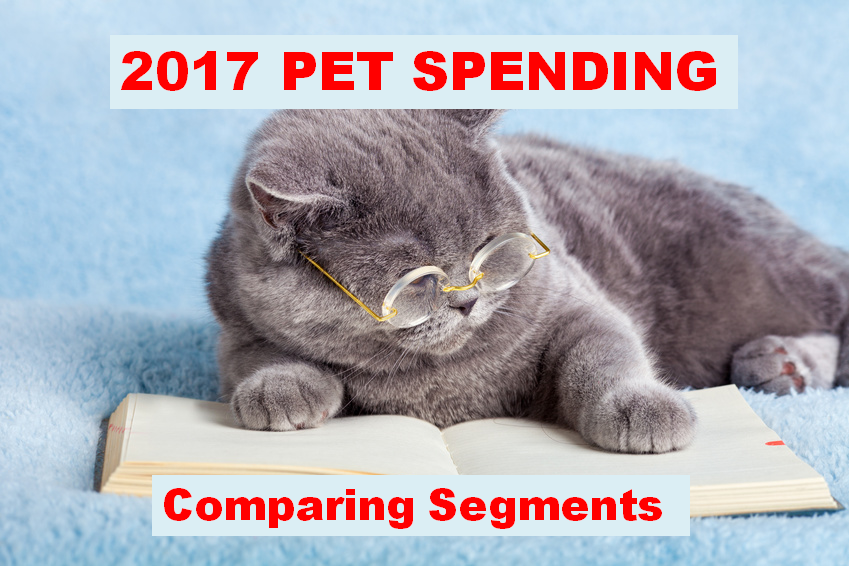 The first six chapters of this Pet Spending Demographics report have been very detailed, data driven and intense. We looked at the industry as a whole and each of the individual Industry segments separately. In 2017 we saw movement toward more balanced spending in terms of Income and Higher Education and a definite spending migration to lower populated areas in both Rural and Suburban settings. There was another change in consumer behavior that we should note.  In 2015 and again in 2016, we saw how shifts in spending behavior in one major category, Pet Food, can negatively (2015) or positively (2016) impact the spending in others. Consumers, in effect, traded $. In 2017, this was not a major factor. Price deflation in Food and Supplies in conjunction with extraordinarily low inflation in the Services segments, made 2017 a year of “Consumer Value” in the Pet Industry. Remember, Value is the #1 driver in Consumer spending behavior. Consumers recognized the opportunity and took advantage of it by spending $9.84B (14.6%) more on their Pet Children. It was a year for the record books.

In the individual sections of the report we have often referenced the similarities and differences in spending between Total Pet and the individual industry segments. Total Pet Spending is a sum of the parts and not all parts are equal. In this final chapter we are going to put the segments side by side to make the parallels and differences more readily apparent. We will address:

The emphasis is on “visual” side by side comparisons to allow you to quickly compare the industry segments. We’ll try to minimalize our comments. You can always reference one of the specific chapters for more details. We’ll also break the charts up into smaller pieces that are demographically related to make the comparison more focused and easier.

Before we get started, let’s take a look at the current market share of the industry segments. The following 2 charts show the 2017 share of spending for each segment and the evolution over the past 25 years. 1992 was the last year that the Food Segment accounted for 50% of Total Pet Spending. By the way, Total Pet Spending was $16.2B in 1992. We have come a long way – +377%; annual growth rate of 6.45%. This will help put our comparisons into better perspective.

The Food segment reached the 40% level again. In 2015 it was 43.5%, the highest level since 1998. Supplies also gained ground while both Services segments lost share. The Veterinary segment didn’t keep pace with the Products increase. The 10.2% share for Services in 2016 was the highest since 2006, but 2017 brought some turmoil and a drop in share.

As we look at the migration, both Services segments have maintained a relatively stable share. The big change was in products. The 90’s brought “Pet Parents”, the rise of Pet Chains and Super Stores and a big expansion in the Mass Market. Retailers filled their shelves with Supplies and Consumers filled their Homes. The recent move to more premium foods has allowed the Food Segment to regain a little ground.

Now let’s get started with a look at the “Big Spenders”. The following 2 charts will compare the market share and performance in all Pet Industry segments by the groups responsible for the bulk of the spending in 10 demographic categories. These are the groups that we identified in our Total Pet analysis to generate at least a 60% market share of spending. As you recall, in the Service segments, we had to alter some groups slightly to better target the spending. However, to have a true side by side comparison we need to use the same groups for all. The market share dips below 60% in 4 situations, to a low of 55%. All these relate to Food, which is yet more evidence that pet parenting is demographically widespread. Even the low point is within 8% of our target and 92% of all measurements meet or exceed the 60% requirement, so the comparison is very valid.

The chart makes it especially easy to compare performance across categories. Remember, performance levels above 120% show a very high level of importance for this category in terms of increased spending. Unfortunately, it also indicates a high spending disparity among the segments within the category. There are 2 charts, each with 5 categories.

Now we’ll drill a little deeper to look at the Best and Worst performing segments in each category. Color Highlighted cells are different from Total Pet; * = New Winner/Loser; ↑↓ = 5+% Performance Change from 2016. We will divide the categories into related groups. First, those related to Income.

Here are two summary charts. The first compares the averages.

It is immediately apparent that the difference grows as you move from Food to Supplies to Services. Spending becomes more discretionary. Additionally, while the difference between winners and losers in Total Pet is virtually unchanged from 2016, it grew larger in the Products segments and shrank in the Services segments. This is somewhat unexpected.

This chart shows the number of new winners/losers.

Total Pet had few changes, especially in winners. Total Pet is a sum of the segments. This can mitigate or even cancel out extreme differences in segments. Always look below the surface.

Now, let’s look at the Demographic Segments with the Biggest Changes in $. We’ll truly see some differences between the Industry Segments. Only 9 of 110 segments are repeats. We have color highlighted differences from Total Pet and…

Now, here are more Demographic Categories in which the consumers can make choices.

I hope that this Visual Comparison helped you to get a “satellite view” of Pet Industry Spending in 2017. Please refer back to the earlier chapters to get more details.

There is another situation that we should address. 2017 was a spectacular year for the Pet Industry, with big spending increases in every segment but Services. There were so many contributors that in each individual chapter we recognized 6 segments that didn’t win but still performed so well that they deserved Honorable Mention. I reviewed that list again and came up with segments that won Honorable Mention in more than one segment. Here are the “SUPER HMs”.

Although there are numerous individual changes, I saw these trends of note: