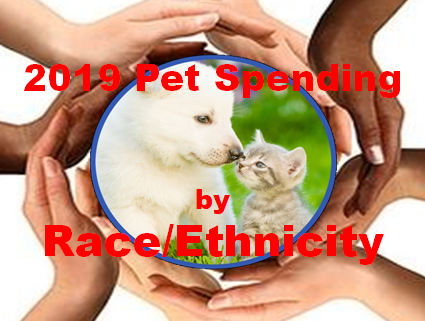 This disparity is evidence of yet another inequity in our society. In this report, we will drill deeper to get more specifics on the Pet Spending by Hispanics (All Races), African Americans and Asians. The U.S. is growing more ethnically diverse every day, so this is a situation and an opportunity which needs to be investigated.

Note: All the numbers are calculated from or taken directly from the Annual US BLS Consumer Expenditure Survey.

Let’s get started by looking at the Racial/Ethnic make-up of the U.S. 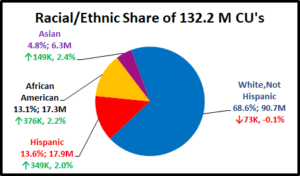 Now let’s take a look at some of the characteristics that we have found to be important in pet spending behavior.

It’s time to look at actual $ spent. We’ll begin with each industry segment which will put the Total Pet $ into better perspective. We will look at 2019 $ as well as a 6 year history. There is a huge disparity in $ between Whites and Minorities but there are also significant differences in key demographic characteristics among the minority groups that affect their spending. We will use multiple graphs to drill deeper into the data. First, Recent Pet Food History… 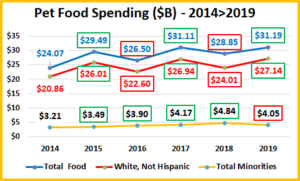 The graph shows the overall Pet Food Spending history from 2014 to 2019. You see that the White, Not Hispanic group mirrors the Super Premium spending waves, both up and down. On the other hand, Total Minority spending showed steady growth in the premium era until 2019. Their big drop in 2019 could be a late reaction to the 2018 FDA warning. From 2014>2019:

Until 2019, Minorities showed steady growth in Pet Food Spending during the Super Premium era. They may be slower to react to food trends. Their biggest lift came in 2018 which may parallel the overall lift in 2017 due to a deeper penetration of the upgrade. The 2019 drop may be a late reaction to the FDA warning. Let’s take a closer look at 2019 and the spending history of specific minorities.

In 2019 we saw an overall rebound in Pet Food spending after the drop in 2018 due to the reaction to the FDA warning on grain free dog food. However, this pattern was not true for minorities. All groups were down in 2019. For Hispanics and African Americans, Pet Food spending fell significantly – double digit %. This was probably due to a slower reaction to the 2018 FDA warning. Spending also decreased for the high income, highly educated Asian group. This minor decrease was likely a result of value shopping. The overall minority decrease drove the White CU share of spending up to 88.2%, second only to their share of Veterinary spending. Here are the specifics:

Although their distinctly different demographics produced different patterns, all minorities have made some level of commitment to upgrading their Pet Food. Now, let’s turn our attention to Pet Supplies. First, 2014>2019 Spending 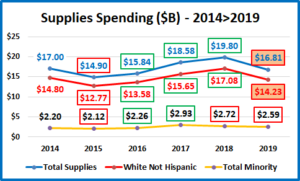 The graph shows the overall Pet Supplies Spending history from 2014 to 2019. Pet Supplies spending is more discretionary than Food, so it reacts more to price changes. You see major spending dips in 2015 and 2019 due to inflation.  The White, Not Hispanic group mirrors the National pattern.  However, Total Minority spending dropped in both 2018 & 2019. This reflects their price sensitivity as inflation began at mid-year 2018. Overall, from 2014>2019:

Minority Supplies spending reflects their focus on “essential” supplies. The more discretionary items are the most impacted by price swings. Note: White, Not Hispanic Spending peaked in 2018, +16.5%; Minorities, +33.2% in 2017.

Prices started up in April of 2018. By the end of 2019 they had inflated 5.7%, the most since the great recession. This had a big impact as discretionary Supplies spending has become more price sensitive to today’s “value conscious” consumers of all income levels. All RacialEthnic groups spent less but the biggest % drops were in the higher income groups. The lower income groups, Hispanics and especially African Americans are more focused on “essential” supplies and less likely to indulge in more discretionary purchases. Minorities have their largest share of $ in Supplies. This is largely due to the lack of major product trends in the segment and their commitment to essential products. Here are the specifics:

All minorities have a commitment to essential supplies. Discretionary spending increases with income, but all groups are sensitive to some degree to the ongoing deflation/inflation trends in this segment.

Now, let’s turn our attention to Non-Vet Services. First, an overview of 2014>2019 Spending 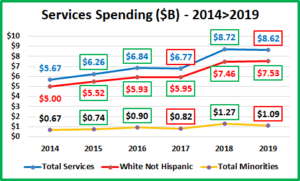 The graph shows the overall Pet Services Spending history from 2014 to 2019. Services spending is the most discretionary of any segment, so it is very dependent upon income. The two slight spending dips in 2017 and 2019 are the only decreases since the great recession. We should also note that spending increased every year for White, not Hispanics. Drops were caused by Minorities.

With a big expansion in outlets, Services became more accessible. This ultimately drove the huge lift in 2018. Minorities $ peaked at +89.6%. The 2017 dip was due to value shopping. In 2019, rising inflation was a factor for lower income CUs.

An increased number of outlets boosted competition and made Services more accessible and convenient for all groups. After a period of low inflation, prices turned up in May of 2018. By the end of 2019 they had inflated 5.6%, double the “normal” rate. It had less of an impact on the higher income groups, whose primary focus is convenience. However, the lower income groups, Hispanics and African Americans, saw double digit drops in Services Spending in 2019.

All Pet Parents appreciate and want the convenience of Pet Services. However, it is the most discretionary of all the industry segments, so income is a definite factor in spending behavior patterns.

Now, let’s look at Veterinary Services. Here is an overview of 2014>2019 Veterinary Spending. 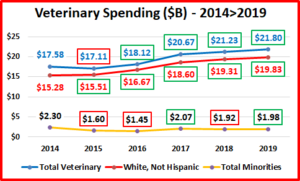 The graph shows the Veterinary Services Spending history from 2014 to 2019. Veterinary spending is a necessary expenditure, but a high inflation rate has made it more dependent upon income. Spending has only fallen once since 2014 and that was driven by minorities. In fact, Minority spending fell in 3 of the last five years but increased every year for White, not Hispanics.

The growth in this segment has slowed since 2017. You can see the impact of rising prices on Minority spending. There was an inflation spike in 2015 which caused the only overall decrease and the biggest $ drop for minorities.

Strong inflation has resulted in a reduction in the frequency of Veterinary visits since the great recession. Much of the segment’s growth has just come from higher prices. In 2019 inflation reached 4.14% so the amount of Veterinary Services actually declined from 2018. The strongly rising prices especially impacted the lowest income group, African Americans. Even though spending in 2019 increased +2.7% for White, Not Hispanics they also had a net decrease in the amount of Veterinary Services. The only “true” gains came from Hispanics and Asians.

Income matters but inflation affects all income levels. In this necessary segment, Pet Parents don’t stop spending they just cut back on the frequency. White, Not Hispanics have a higher income and the highest level of Pet ownership. The result is that they dominate this segment with over 90% of the spending. 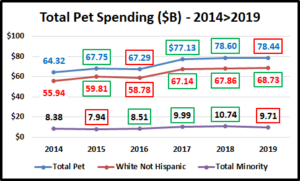 The graph shows the Total Pet Spending history from 2014 to 2019. Each Segment has a different story. The two drops in Total Pet Spending are tied to Food Value Shopping in 2016 and Supplies inflation in 2019. The White, Not Hispanic group mirrored the National pattern until 2019. Total Minority spending dropped in both 2015 & 2019. Their 2019 decrease was large enough that it drove the whole industry down. Overall, from 2014>2019:

The Total Pet spending pattern for Whites and Minorities only matched in 2017 & 2018 when both spent more. In the other years they were opposites. Spending peaked for Minorities in 2018 at 28.2%.

There were a lot of things going on in 2019. The two biggest factors were the rebound in Pet Food spending after the FDA warning and the high inflation in Supplies prices. The reaction to these and other trends in the industry varied among Racial Ethnic groups. However, income may be the most important demographic difference. The two highest income groups, Whites and Asians spent more on their pets in 2019. However, it wasn’t enough to overcome spending decreases by the lower income groups, Hispanics and African Americans. Here are the specifics:

In 2019 income truly mattered in Pet Spending. However, from 2014>2019 all groups but African Americans increased Pet Spending. Now, we’re going to look a little closer at the most accurate comparison, Spending Performance.

Spending performance is determined by dividing a group’s share of Total $ spent by their share of total U.S. CUs. This factors in both changes in $ spent and in the number of CU so it accurately accounts for the ongoing evolution of both the Pet Industry and U.S. Society.

The graph below shows the annual Total Pet Spending performance of all Racial/Ethnic groups from 2015 to 2019. Total Pet $ grew 15.8% during this time but Minority Pet $ grew 22.3% as they climbed up from their 2015 low point. They were aided by a +7.6% increase in CUs compared to only +1% for whites. It was a tumultuous time in the industry with two down years and big spending swings in many segments. Some of the key industry trends behind those swings were:

Our takeaway from this analysis is that Hispanics are likely to continue to make progress. Asians will need to become more Americanized in their pet ownership to drive spending. African Americans may need some assistance or at least an equal opportunity. While their demographic issues are not caused by the Pet Industry, we certainly see their impact. The situation of African Americans is a big problem and a big opportunity – both for our society and the Pet Industry.