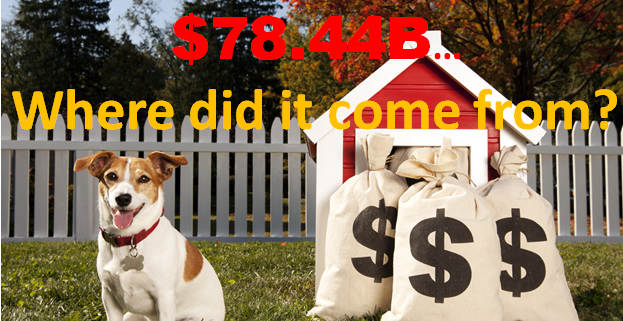 Total Pet Spending in the U.S. was $78.44B in 2019, a -$0.16B (-0.02%) decrease from 2018. These figures and others in this report are calculated from data in the annual Consumer Expenditure Survey conducted by the US BLS. 2019 was essentially a “flat” year for the industry, on the surface. However, when you look at each segment there was a certain amount of turmoil. Pet Food spending rebounded after the 2018 FDA warning on grain free dog food but the new tariffs on Supplies really hit home across almost all demographics and the $ plummeted. Services spending dipped slightly after the record lift in 2018. Veterinary spending had another small increase, but it was all due to inflation. 2019 Pet Spending certainly deserves a closer look.

Knowing the specific group within each demographic category that was responsible for generating the bulk of Total Pet $ is the first step in our analysis. Next, we will drill even deeper to show the best and worst performing demographic segments and finally, the segments that generated the biggest dollar gains or losses in 2019.

In the chart that follows, the demographic categories are ranked by Total Pet market share from highest to lowest. We also included their share of total CU’s (Financially Independent Consumer Units) and their performance rating. Performance is their share of market vs their share of CU’s. This is an  important number, not just for measuring the impact of a particular demographic group, but also in measuring the importance of the whole demographic category in Spending. All are large groups with a high market share. A performance score of 120+% means that this demographic is extremely important in generating increased Pet Spending. I have highlighted the 6 groups with 120+% performance.

The only group change from 2018 is that $70K> replaced $50K> as spending skewed towards higher incomes in 2019. However, there were changes in the numbers and rankings. Everyone Works, Homeowners and Suburban gained in share, ranking and performance. Married Couples and 2+ CUs fell in ranking and in all measurements. Education’s rank didn’t change but they lost share and decreased performance while 35>64 yr olds, Whites and Wage Earners gained in these 2 areas.

Total Pet Spending is a sum of the spending in all four industry segments. The “big demographic spenders” listed above are determined by the total pet numbers. Although the share of spending and performance of these groups may vary between segments, in only 1 case does any group’s share of spending fall below 60%, 57.0% Married Couples, Services $. In the Services segment analysis, we also altered 2 groups to better reflect where most of the business is coming from.

The group performance is a very important measure. Any group that exceeds 120% indicates an increased concentration of the business which makes it easier for marketing to target the big spenders. Although Income over $70K is the clear winner, there are other strong performers. The high performance in 6 groups also indicates the presence of segments within these categories that are seriously underperforming. These can be identified and targeted for improvement.

Most of the best and worst performers are just who we would expect and there are only 5 that are different from 2018. Changes from 2018 are “boxed”. We should note:

Most expected winners are still doing well. The “new” winners reflect the growing strength of Gen X. In the next section we’ll look at the segments who literally made the biggest difference in spending in 2019.

We’ll “Show you the money”! This chart details the biggest $ changes in spending from 2018.

We’ve seen the best overall performers and the “winners” and “losers” in terms of increase/decrease in Total Pet Spending $ for 12 Demographic Categories. Now, here are some segments that didn’t win an award, but they deserve…. 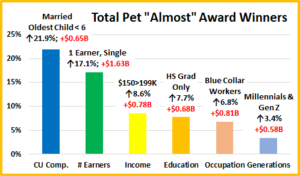 Let’s start with Married, Oldest child <6. They are the repeat best performer in this “almost” group. Their spending has increased $1.58B (+76.7%) since 2017, quite an accomplishment. This group is generally younger and evidence of the increasing commitment of younger Americans to their Pet Children. That brings us to our 2nd repeat on this list. The Millennial/Gen Z group also gets honorable mention again for their $0.58B spending increase. Gen X only beat them out for the top spot by $0.01B. Overall, Singles have gotten a lot of accolades for their 2019 performance, but I have added one of their subgroups – 1 Earner, singles to the honor roll. They provided 78% of the Singles’ total Increase. We can’t forget another high income group. $150>199K was up $0.78B (+8.6%). College Grads win the awards, but Pet Parenting is widespread. High School grads with no college spent $0.68B (+7.7%) more in a tumultuous year. Finally, most pet spending is done by “white collar” workers and bosses, but there are a lot of Blue Collar pet parents too. In a flat year, they spent $0.81B (+6.8%) more on their pet children.

To properly review 2019, we must put it into context with recent history. Total Pet Spending peaked in 2018 at $78.60B, a $14.28B, 22.2% increase from 2014. However, it was not a steady rise, Total spending actually fell in 2016 and each segment had at least one down year. There were a number of factors driving both the growth and tumult within the industry. Two big positives were the movement to super premium pet foods and the rapid expansion of the number of outlets offering pet services. On the downside were value shopping, trading $ between segments and outside influences like the FDA dog food warning and tariffs. Pricing, inflation/deflation was also a negative/positive factor in some cases.

That brought us to 2019. The industry had another small decrease, -$0.16B (-0.2%) which was largely driven by a huge drop in spending in Supplies caused by Tarifflation. This affected virtually every demographic segment and caused Supplies $ to fall below 2014. Services spending also fell slightly as consumers value shopped. The good news was Pet Food bounced back from the impact of the 2018 FDA warning to reach a new record high. Veterinary $ also increased 2.7%. Unfortunately, this was entirely due to a 4.1% increase in prices. The amount of Vet Services actually decreased.

There was one change in the big demographic groups responsible for most pet spending as the <$70K income group replaced the <$50K group. Income is becoming even more important in Total Pet Spending, which is reinforced by performance. The number of most influential big groups remains 6, but income truly stands alone at the top.

In the best/worst performing segments, 3 Person and 2 Earner CUs became #1 and Gen X stayed on top, more validation of the ongoing youth movement. A surprise was the Northeast, taking over from the West, the usual winner.

The biggest $ changes saw far less turmoil than in 2018. 9 segments held their position, compared to 3 in 2018, while just 4 switched from 1st to last or vice versa. There were 13 “flips” in 2018. Singles continued their strong growth, and many winners were the “usual suspects: but there were 5 surprises – 75+ yr olds, $70>99K, Northeast, Homeowners w/o Mtges and Tech/Sales/Clerical. This was a mixture of both younger and older Americans. Of note, Baby Boomers spending continued to fall. Gen X and Millennials spent more but couldn’t quite make up the difference. Race/Ethnicity also was a factor in 2019. White, not Hispanics spent $0.87 more but Hispanics and African Americans spent $1.06B less. To get to the heart of 2019 Pet Spending, we will continue our analysis by drilling down into the individual segments.

But before we go…The “Ultimate” Total Pet Spending Consumer Unit in 2019 consists of 3 people – a married couple with a child over 18. They are in the 45 to 54 age range. They are White, but not Hispanic. At least one of them has an Advanced College Degree. The parents work in their own business and are doing well  – over $200K. They’re still paying off their house located in a small suburb of a metropolitan area with a population of about 4,000,000 in the Northeast.