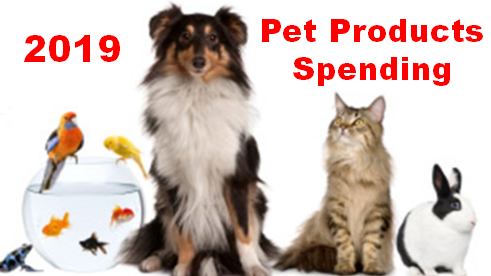 We looked at the Total Pet Spending for 2019 and its key demographic sources. Now we’ll start drilling down into the data. Ultimately, we will look at each individual segment but the first stop in our journey of discovery will be Pet Products – Pet Food and Supplies. Food and Supplies are the industry segments that are most familiar to consumers as they are stocked in over 200,000 U.S. retail outlets, plus the internet. Every week over 21,000,000 U.S. households buy food and/or treats for their pet children. Pet Products accounted for $48.01B (61.2%) of the $78.44B in Total Pet spending in 2019. This was down $0.64B (-1.3%) from the $48.65B that was spent in 2018. Pet Food spending rebounded from the reaction to the 2018 FDA warning on grain free dog food, but the impact on Supplies from the new tariffs really hit home in 2019. Supplies prices rose sharply which affected virtually every demographic segment and spending plummeted.

Overall, in 2019 Pet Food spending rose +$2.35B, while Supplies spending fell a record -$2.98B. We’ll combine the data and see where the bulk of Pet Products spending comes from.

We will follow the same methodology that we used in our Total Pet analysis. First, we will look at Pet Products Spending in terms of the same 10 demographic category groups that were responsible for 60+% of Total Pet spending. Then we will look for the best and worst performing segments in each category and finally, the segments that generated the biggest dollar gains or losses in 2019.

The first chart details the biggest pet product spenders for each demographic category. It shows their share of CU’s, share of pet products spending and their spending performance (spending share/share of CU’s). Although their share of the total products $ may be different from their share of the Total Pet $, the biggest spending groups are the same. The categories are shown in the order that reflects their share of Total Pet Spending. This highlights the differences. In Pet Products spending, the # of earners, age and marriage are more important while education matters less. We should note that, like Total Pet Spending, Income is the highest performing demographic characteristic. In Pet Products there are 5 groups with a performance rating of over 120%, up from 4 last year. This is one less than Total Pet, which indicates that Pet Products spending is growing more concentrated but is still spread more evenly across the category segments.

The biggest spending groups are the same for Pet Products as for Total Pet, but there are subtle differences in market share and performance. Money matters most but now how many earners also matters. It also appears that Pet Products Spending is becoming less balanced  across almost all demographic categories.

Most of the best and worst performers are the ones that we would expect. However, there are 7 that are different from 2018. That is the same as last year and 2017, but again is 2 more than Total Pet. Changes from 2018 are “boxed”.

We should note: Only 1 of the Product winners is different from Total Pet – the West, who lost in Total Pet to the Northeast because of their Veterinary segment performance.

Almost all of the winners are the ones we expected, but the gap between them and the losers has increased.

In this section we will see who drove Pet Products spending down. There are three repeats from 2018 and 9 Segments switched positions – from first to last or vice versa. This is less turmoil as 2018 had only 1 repeat but 15 flips. There is only 1 truly surprising winner, High School Grads Only. Here are the specifics:

We’ve now seen the winners and losers in terms of increase/decrease in Pet Products $ for 12 Demographic Categories. 2019 was not a good year for Pet Products Spending. Food rebounded from the negative impact of the 2018 FDA warning on grain free dog food but couldn’t overcome the record drop in Supplies $ due to Tarifflation. All but 3 segments spent less on Supplies, but 75% spent more on food so that 36 (37.5%) spent more on Pet Products. Of course, not every good performer can be a winner but some of these “hidden” segments should be recognized for their outstanding effort. I’ve narrowed the group down to 6. They don’t win an award, but they deserve…. 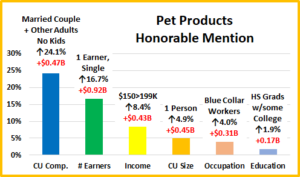 Pet Products spending was down $0.64B in 2019. However, It was again a mixed bag. A rebound in Food couldn’t quite counter the big, widespread drop in Supplies. Married Couples often lead the way but not in 2019. Only select segments like those with Other Adults but No Kids spent more. The # of Earners mattered more, including 1 Earner, Singles. In 2019 it was basically all about money as all groups with income over $70K spent more, including $150>199K. Spending by 1 Person CUs also continued to increase as they had a second consecutive year of 5% growth. They are still the worst performing size but are 30.2% of U.S. CUs and their numbers are increasing, +1.1M CUs in 2019. Spending by Blue Collar workers, especially nonService workers, began to bounce back after their drop in 2018. Finally, Education became a little less important in 2019 as High School Grads, including those with some College were the only segments in the category to spend more on Pet Products. Pet Products spending was down again in 2019 and like 2018, this drop was due to outside factors. 2018: FDA Warning; 2019: Tariffs

Spending has seen a lot of turmoil since 2015. Many consumers upgraded to Super Premium Food and cut back on Supplies in 2015. In 2016 they value shopped for Food and Spent some of the saved money on Supplies. In 2017 there was increased availability and value in both segments. More Consumers recognized the opportunity and spent $7B more. 2018 was calm, until the second half when the FDA warning on grain free dog food caused many consumers to downgrade their food and new tariffs on Supplies flattened spending growth. The result was -$1B drop in Products $.

In 2019 Pet Food spending rebounded to a new record level but the full impact of higher prices in the Supplies segment really hit home, with a record $2.98 decrease in spending. The drop was almost universal as 93 of 96 demographic segments spent less. The result was a -$0.64B drop in Pet Products $, the second consecutive decrease.

On the surface, one change was immediately apparent. In the demographic groups responsible for most of Pet Products Spending, $50K> was replaced by $70K>. In their spending share and rankings, # Earners and Age moved up while Higher Education and Marriage became less important. In performance, Income, Marriage and now Race/Ethnicity are the top 3. There were again 5 groups with 120+% performance as the Age Group rejoined the club. Total Pet has the same 5, plus Higher Education so Pet Products spending is still slightly more balanced than Total Pet.

When we looked at the performance of individual segments, most winners were expected. The 4 new winners reflect the movement to younger (Gen X vs Boomers) and higher income CUs.

The $ drop was smaller in 2019 and there was more stability than in 2018. In terms of $ change, 3 segments held their position (only 1 in 2018) and 9 flipped from 1st to last or vice versa (15 in 2018). However, there were fewer segments with increased spending, 36, compared to 54 last year. Most of the winners were the “usual suspects”. There was only one true surprise – High School Grads with no college. Many of the other winners support the trends to higher income and younger CUs – 2 Earners, 3 People, Married, Oldest Child >18. These segments all tend to be a big part of another winning segment – Gen X. However, Baby Boomers aren’t done yet – 55>64 yr olds and Homeowners w/o Mtges also won. Now…2020. By almost any measure, the pandemic made it a year like no other. Indications are that Pet Parents spent more time with and money on their pet children. The year was radically different, but our question will remain the same. Who was spending the money?

Finally,… The “Ultimate” 2019 Pet Products Spending CU is a married couple with 1 child over 18. They are in the 45>54 age range and are White, but not Hispanic. At least one has an advanced College Degree. Both of them work in their own business, earning over $200K. They still have a mortgage on their house located in a small Suburb  in the West.