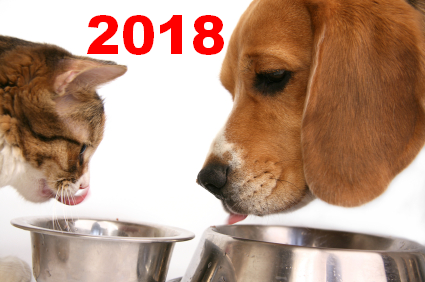 In 2018 The U.S. Pet Industry had a year that can best be described as a mixed bag. Total spending increased to $78.6B, up $1.47B (+1.9%). Supplies and Veterinary had modest increases, while the Services Segment had the biggest growth in history. The big downside was that the Food Segment gave back half of the $ gain made in 2017. Here are the specifics:

The industry truly is a “sum” of its integral segments and each segment has very specific and often very different buying behavior from the many consumer demographic segments. For this reason, we’re going to analyze each of the industry segments first. This will put the final analysis of Total Pet Spending into better perspective. Note: The numbers in this report come from or are calculated by using data from the current and past US BLS Consumer Expenditure Surveys. In 2018, this was gathered by the U.S. Census Bureau from over 42,000 interviews and spending diaries. The final data was then compiled and published by the US BLS.

We will start with the largest Segment, Pet Food (and Treats). In 2018 Pet Food Spending totaled $28.85B in the U.S., a $2.27B (-7.3%) decrease from 2017. This was the second largest decrease in history, trailing only the -$2.99B drop in 2016. It’s interesting that the 4 greatest changes in $, up and down, have all occurred in the last 4 years. The current trend in high priced, super premium foods magnifies the results of any changes in consumer purchasing behavior. As you recall, in earlier research we discovered a distinct, long term pattern in Pet Food Spending. In 2018 we broke that pattern. Take a look at Pet Food Spending since 1997 in full Retail Dollars and adjusted for inflation.

The pattern begins in 1997. Retail Pet Food Spending increases for 2 consecutive years then reaches a plateau year or even drops. There is a notable exception – the period from 2006 to 2010. During this time, there were two traumas which directly impacted the Pet Food Retail market. The first was the Melamine recall, which resulted in radically increased prices as consumers insisted on made in USA products with all USA ingredients. The second affected everyone – the great Recession in 2009. This was the first time that annual U.S. retail spending had declined since 1956. The net result was that the plateau period was extended to include both 2009 and 2010.

Pet Food seems to be driven by short term trends. A new food trend “catches the consumers’ attention” and grows…for 2 years. Then sales plateau or even drop…and we’re on to the next “must have”. The increases have become more pronounced in recent years and the whole situation has gotten even more complicated since 2014. That was the year that Food prices began an extended period of deflation due to an unprecedentedly competitive market.

After consumers choose to upgrade to a more expensive pet food, their #1 priority becomes, “Where can I buy it for less?” The internet entered this battle in a big way and “value shopping” was a major contributing factor in the big spending drop in 2016 and its influence continues to grow.

In 2017, according to the 20-year pattern, we should have been beginning a new trend. There was the expected lift in Pet Food spending but what was the new “must have” type! There were some possible candidates, but nothing stood out. A deeper dive into the data showed that the $4B increase in Pet Food spending in 2017 didn’t come from a new trend. It came from a deeper demographic penetration of Super Premium foods. Value shopping in a highly competitive market, especially on the internet had made Super Premium pet foods more accessible to a broad swath of consumers.

Like Pet Food, human behavior has changed over the years in regard to our pets. In the 90’s, Pet Owners became Pet Parents. Then, we took it a step further after the turn of the century and began truly humanizing our pets, especially our canine children. This movement is very accurately reflected in the evolution of Pet Food. We became increasingly more conscious of fulfilling the health needs of our pets, beginning with the first move to premium foods in 2004. This ramped up considerably after the Melamine scare in 2007. Now consumers read pet food labels, research ingredients and expect their pet foods to meet the same quality standards as the best human foods. We may have moved away from trends to a new standard – an expectation of excellence – nothing else will do. 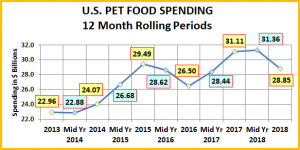 Pet Food Spending fell in 2013 and continued down in the first half of 2014. This corresponds to the beginning of a  general deflation which continued through 2018 in this segment. During deflation, in a “need” category like Food, you don’t buy more, you just spend less. The spectacular lift in Pet Food Spending beginning in the second half of 2014 came from a fundamental change in spending behavior. Consumers began to buy more Super Premium Food and Med/Supplements in Treat form, all of which cost more.

In 2017 Pet Food spending registered the second largest increase in history. It was time to begin a new “trend”, but this big lift was unusual. Usually the biggest increase comes in the 2nd year of a cycle. There also was no clear product focus.

Looking deeper into the data we discovered that it was not a new food trend. It was a deeper demographic penetration of Super Premium. Higher education and higher income have driven recent food trends. However, the highly price competitive market had made these high-priced foods more accessible to Blue Collar workers and those without college degrees. Baby Boomers in these groups, with their strong commitment to their pets, responded in a big way, +$3.8B.

After such a big lift in year 1, the 2018 increase was expected to be small and the first half started out that way, +$0.25B. Then the bottom dropped out in the second half of the year as spending fell -$2.51B, the biggest half year decrease in history. In July of 2018 the FDA issued a warning about the possible connection between DCM and grain free dog food. This was frightening and one suggestion was to move back to standard foods. A coincidence? Let’s look closer.

Before we drill into the spending data let’s look at another source of industry information – Global Pet Expo and SuperZoo. The number and nature of the exhibitors at these shows reflects the trends in the overall market and can even foreshadow things to come. Let’s look at the average exhibitor count for 3 specific Dog and Cat product categories:

The growth of the Food and Treat categories reflects the rise of Super Premium. Many new companies joined into the fray, creating a very competitive market. Mergers/acquisitions stabilized the exhibitor count but it’s still competitive.

The growth of the meds/supp. category has been spectacular. Together, these 3 categories reflect the Pet Parents’ absolute number 1 concern – the health and wellbeing of their Pet Children, which starts with the quality of their food.

Now let’s look at some specific 2018 Pet Food Spending Demographics. First, we’ll look at income. Prior to 2014 it was a less dominant factor in Food spending. However, the move to Super Premium has brought it more to the forefront. In 2017, with competitive pricing and the consumers’ commitment to pet health, Super Premium drove spending growth in every major income group. In this chart we will show the annual spending from 2013 through 2018. This will put the 2018 numbers into better perspective .

All of these large Income groups, except the over $150K, decreased Pet Food spending in 2018. Prices deflated 0.02% in 2018 which indicates that income is not the major demographic factor in the spending drop. Here are 2018 specifics:

In 2017, the increase in Pet Food spending was widespread across incomes. In fact, groups totaling 84.7% of all U.S. households spent more on Pet Food. In 2018, the decrease was also widespread, as 77.0% of all households spent less on Pet Food. The 2 groups that spent more are widely separated, $30>39K and $150>199K. This indicates that while the reduction in Food spending affected most Americans, it is not directly tied to income.

For Pet Food spending it was essentially a battle. The youngest and oldest were on the plus side while the middle groups spent less. Unfortunately, with the 55>64-year olds leading the way, the downside won.

We need to drill deeper. Let’s take a look at the segments with the biggest change in spending in 12 categories. The segments that are outlined “flipped” from 1st to last or vice versa from 2017. The red outline stayed the same.

2018 was the year of the “flip”. Four of 2017’s biggest losers moved to the top in 2018. The South maintained their position at the bottom. However, every other 2017 demographic category winner became the biggest loser in 2018. This is quite unprecedented. We saw that the spending drop was very widespread across income groups but was much more limited in terms of age – primarily the 55>64-year olds. Looking at the specific demographics we can identify…..

….The biggest “losing” household in Pet Food Spending for 2018.

It is a White, non-Hispanic, Baby Boomer couple living alone. Their last Millennial child finally moved out. They got job training after high school but only one of them still works, in a blue-collar job and earns about $70K. They live in a small community, under 2500 people. They have paid off their home mortgage and are looking forward to retirement.

There were multiple factors behind the drop in Pet Food Spending in 2018. Here are 3 that were definitely impactful:

2018 was a complex and “trying” year in the Pet Food segment. We broke a spending pattern of 20 yrs. Let’s hope that the 25>34-year old’s record of predicting next year’s market stays true. If so, Pet Food $pending will increase in 2019.