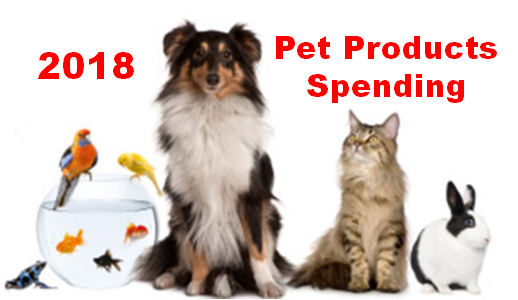 We looked at the Total Pet Spending for 2018 and its key demographic sources. Now we’ll start drilling down into the data. Ultimately, we will look at each individual segment but the first stop in our journey of discovery will be Pet Products – Pet Food and Supplies. Food and Supplies are the industry segments that are most familiar to consumers as they are stocked in over 200,000 U.S. retail outlets, plus the internet. Every week over 22,000,000 U.S. households buy food and/or treats for their pet children. Pet Products accounted for $48.65B (61.9%) of the $78.6B in Total Pet spending in 2018. This was down $1.046B (-2.1%) from the $49.69B that was spent in 2017. We have seen that this drop was caused by the reaction to the FDA warning on grain free dog food which drove food spending down in the second half combined with new tariffs on Supplies, which flattened spending in that segment in the second half.

Overall, in 2018 Pet Food spending fell -$2.27B, while Supplies spending growth slowed to +$1.22B. We’ll combine the data and see where the bulk of Pet Products spending comes from.

We will follow the same methodology that we used in our Total Pet analysis. First, we will look at Pet Products Spending in terms of the same 10 demographic category groups that were responsible for 60+% of Total Pet spending. Then we will look for the best and worst performing segments in each category and finally, the segments that generated the biggest dollar gains or losses in 2018.

The first chart details the biggest pet product spenders for each demographic category. It shows their share of CU’s, share of pet products spending and their spending performance (spending share/share of CU’s). Although their share of the total products $ may be different from their share of the Total Pet $, the biggest spending groups are the same. The categories are presented in the order that reflects their share of Total Pet Spending. This highlights the differences. In Pet Products spending, the # of earners and occupation are less important while marriage and area type matter more. We should also note that, like Total Pet Spending, Income is the highest performing demographic characteristic. In Pet Products there are 4 groups with a performance rating of over 120%, which is down from 5 last year. This is two less than Total Pet, which indicates that Pet Products spending is spread more evenly across the category segments.

Although the biggest spending groups are the same for Pet Products as for Total Pet, there are subtle differences in market share and performance. Money still matters most but how you earn it matters less. It appears that Pet Products Spending is becoming more balanced  across almost all demographic categories.

Most of the best and worst performers are the ones that we would expect. However, there are 7 that are different from 2017. That is the same as last year but 2 more than Total Pet. Changes from 2017 are “boxed”.

We should note: Only 1 of the Product winners is different from Total Pet – 55>64 yr olds, who won despite a 30 point drop in performance. The performance of the matching segments is lower than Total Pet, with 1 exception – the Suburbs <2500. Their performance fell from 170% to 160% but they still grabbed 2nd place, behind the $200K+ group.

The average performance of the 2018 Product winners was 134.6%, down sharply from 142.8% – 9 were down. The average for the losers was 63.4%, up from 60.0% – 9 were up. The narrowing of the gap between best and worst reinforces that Pet Products spending is becoming more balanced across America. We should also note:

Except for Gen X, the winners are the ones we expected, but the gap between top and bottom has narrowed.

In this section we will see who drove Pet Products spending down. There is only one repeat from 2017 – the Midwest won again. There was definitely turmoil as 15 Segments switched positions – from first to last or vice versa. However, there are other surprises, like the performance of 65>74 yr olds, Tech/Sales/Clerical workers, Hispanics and Millennials.

We’ve now seen the “winners” and “losers” in terms of increase/decrease in Pet Products Spending $ for 12 Demographic Categories. 2018 was not a great year for Pet Products Spending due to Food. Many 2017 big spenders like Boomers, Blue Collar Workers, HS Grads with some College and Rural areas did a reversal in 2018. A lot of Segments spent more but their efforts failed to counter the drop in Food spending. Of course, not every good performer can be a winner but some of these “hidden” segments should be recognized for their outstanding effort. In 2018 there were actually quite a lot of them. I’ve narrowed it down to 6. They don’t win an award, but they deserve…. 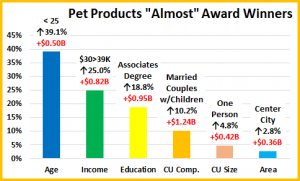 Pet Products spending was down $1B in 2018. However, It was a mixed bag. An increase in Supplies couldn’t quite counter the big drop in Food. A significant increase, +39%, came from the <25 group. This bodes well for the future. It also wasn’t “all about money” as the $30>39K income group spent 25% more. Education once again became more important in Pet Products spending but not just college degrees. The Associates Degree group finished second behind the BA/BS group, but had a 19% increase. Marriage is the second most important factor in Pet Products spending but the CUs with Children were the drivers. Regardless of their children’s age, all groups increased spending. We can’t leave out singles. They are the worst performing group but are 30% of U.S. CUs. They stepped up with a 5% increase. Finally, the large Suburbs had the biggest increase, but Center City also spent more. In 2018, more population, at least in the West and Midwest, meant increased spending. Pet Products spending was down in 2018 but it wasn’t all bad news. 50 of 92 segments had an increase, so 54% spent more.

Spending on Pet Products has been on a roller coaster ride since 2015. Many consumers upgraded to Super Premium Food and cut back on Supplies in 2015. In 2016 they value shopped for Food and Spent some of the saved money on Supplies. In 2017 there was increased availability and value in both segments. More Consumers recognized the opportunity and spent $7B more.

2018 was calm, until the second half when the FDA warning on grain free caused many consumers to downgrade their food and new tariffs on Supplies flattened spending growth. On the surface, big changes weren’t immediately apparent. The demographic groups responsible for most of Pet Products Spending were the same as those in 2017. However, there were changes in their spending share and rankings. Higher Education and Marriage moved up while the number of Earners and Age became less important. In terms of their performance, Income, Marriage and Homeownership stayed on top. However, there were now only 4 groups with 120+% performance as the Age Group dropped out of the club. Total Pet has the same 4, Plus Age and Higher Education. This indicates that Pet Products spending is more balanced than Total Pet in certain demographic categories and this movement continues.

When we looked at the performance of individual segments, the winners were “back to normal” with the groups that we have come to expect through the years, with one major exception – Gen X replaced Baby Boomers as the top performing generation. This was a huge change and the impact became more apparent when we looked at $ changes.

The first thing that we note is that the Boomers spending fell $4.6B. You see the widespread impact as 2017’s big winners like Blue Collar, HS Grads with Some College and Rural “gave it all back” in 2018. In an apparent reaction to the FDA Dog Food warning, they undoubtedly downgraded their Food. This along with the new tariffs on Supplies created incredible turmoil in the 2018 market. 15 of the 24 segments switched positions compared to 2017, from 1st to last or vice versa. However, it wasn’t all bad news. 50 of 92 demographic segments (54%) actually increased Pet Products spending in 2018. Both young and old stepped up. You see this in the performance of winners like Millennials, Renters, 65>74 yr olds, Married with an oldest child under 6 and many more. Although they weren’t able to overcome the massive influence of the Boomers, it bodes well for the future. What about 2019? Hopefully, the Food segment will return to a more normal market. The big question is how will a full year of added tariffs affect Supplies spending?

Finally…The “Ultimate” 2018 Pet Products Spending CU is a married couple, alone. They are in the 45 to 54 age range. They are White, but not of Hispanic origin. At least one of them has an advanced College Degree. Both of them work in their own business, earning over $200K. They still have a mortgage on their house located in a small Suburb  in the West.