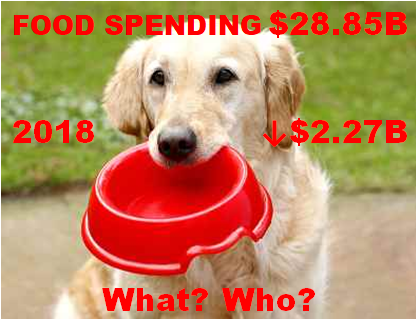 As we continue to drill ever deeper into the demographic Pet spending data from the US BLS, we have now reached the level of individual Industry segments. We will start with Pet Food, the largest and arguably most influential of all. We have noted the trendy nature of Pet Food Spending – 2 years up then spending goes flat or turns downward for a year. This pattern began in 1997 but has become more pronounced since 2003. After the dip in 2016, Food spending increased by $4.6B in 2017 due to a deeper market penetration of super premium foods. We then expected a small increase in 2018 but what we got was a $2.27B decrease (-7.3%). This was likely due to the reaction to the FDA warning on grain free dog food. A pattern of over 20 years was broken by 1 statement. Let’s take a closer look.

First, we’ll see which groups were most responsible for the bulk of Pet Food spending and the $2.27B drop. The first chart details the biggest pet food spenders for each of 10 demographic categories. It shows their share of CU’s, share of pet Food spending and their spending performance (Share of spending/share of CU’s). 9 of the groups are the same as Total Pet. However, Pet Food spending by Age group has become more balanced and skewed slightly older. The categories are presented in the order that reflects their share of Total Pet Spending. This highlights the differences in importance. In Pet Food the # of earners is far less important while Marriage matters more. Also, while Income is still the highest performing demographic characteristic, it carries less weight in Food spending. Another big difference is that Total Pet had 6 groups performing at or above 120%. Pet Food had only 4. This indicates that Pet Food spending and Pet ownership is spread more evenly across demographic segments. Pet Products also had only 4 groups over 120%. This shows the influence of the Pet Food Segment which still accounts for 59% of Pet Products $ and 37% of all Pet Spending.

9 out of 10 big spenders for Pet Food are the same as those for Total Pet and Pet Products but generally have a lower market share and performance. Pet Food spending fell $2.27B in 2018. We have strong initial indications that much of the drop came from a complete reversal of spending from the groups that upgraded in 2017, possibly due to the FDA warning. Income is still important but there are indications of more balanced spending in most demographic categories.

Even as we drill down to the Industry segment level, many of the best and worst performers are the ones that we would expect. In Pet Food spending, there are  7 that are different from 2017, which is 2 more than for Total Pet but the same as Pet Products. 7 of 12 winners are the same as Pet Products but all the losers match. This demonstrates the impact that the Food spending decrease had on overall Pet Products. Changes from 2017 are “boxed”. We should note:

There is 1 repeat from 2017 – the South lost again. 17 of the 24 segments (71%) flipped from 1st to last or vice versa – talk about turmoil! 6 of the 12 categories had dual flips but we still had some surprise winners, like Millennials, 65>74 yr olds and Renters. It is at this level where the demographic uniqueness of the different industry segments truly shows up. Here are the specifics:

We’ve now seen the “winners” and “losers” in terms of increase/decrease in Pet Food Spending $ for 12 Demographic Categories. The results strongly reinforce our initial observations of a spending reversal by the groups that largely drove the $4.6B increase in 2017. Since the spending drop occurred in the second half, it is likely a reaction to the FDA warning about grain free dog food made in July of 2018. In this situation there were a number of segments with a huge decrease in spending. However, we have identified 11 of the 12 “winning” segments which unsuccessfully tried to reverse the $2.27B decrease in Pet Food Spending. They were not alone. Not every good performer can be a winner. Some “hidden” segments should also be recognized for performance. They don’t win an award, but they get… 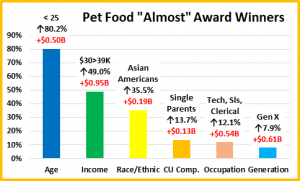 The spending lift by the <25 group may be the most significant because it signals increased involvement with pets. The $30>39K income group reflects the positive performance by Retirees. Asian Americans’ spending was up 35.5% which is a great sign as this group has the lowest percentage of pet ownership. Single Parents rarely win any spending awards. Their 13.7% increase deserves recognition. Also, the “bosses” generally get the credit, but the Tech/Sales/Clerical workers spent $0.54B more in 2018. Finally, the Millennials had the biggest increase, but the Gen Xers weren’t far behind, +$0.61B. The drop in Pet Food Spending was widespread, but 2018 wasn’t all bad news. 43 of 92 demographic segments, 46.7% spent more on Food.

As we have noted, the Pet Food spending drop in 2018 was unexpected as it broke a pattern of 2 years up followed by 1 year of flat or declining sales which has been going on since 1997. This trendy nature increased with the first significant move to premium foods in 2004. The Melamine crisis in 2007 intensified the pattern and resulted in a series of “waves” which became a tsunami with the introduction of Super Premium Foods.

That brings us to 2018. We expected a small annual increase in Pet Food and spending in the first half was up $0.25B. Then the bottom dropped out as spending fell $2.51B in the second half. The timing of this spending drop, in correlation with the FDA warning on grain free is too close to be a coincidence. When we got the 2018 data, we began an in depth demographic analysis of Pet Food Spending. It turns out that the big decrease in pet food spending was coming directly from the groups who had fueled the big 2017 increase. They had obviously backed off from the previous year’s upgrade “en masse”. Fear for their pet’s welfare is the obvious reason for such an abrupt turnaround. This is especially true since the primary motivator for pet parents is the health and well-being of their pet children, especially regarding nutrition.

As you have seen from our analysis, it certainly caused turmoil in the segment as 71% of the demographic groups with the biggest change in Pet Food $ switched from first to last or vice versa from their position in 2017. However, It wasn’t all turmoil and bad news. 47% of 92 democratic segments increased pet food spending. They may have upgraded even more, added supplements or wanted more facts on grain free. The other good news is that the average gap between the best and worst performing segments in 12 categories fell by 23%. Pet Food spending is becoming even more demographically balanced in America. We’ll see what 2019 brings. Are we starting a new pattern or maybe no pattern?

Finally – 2018’s “Ultimate” Pet Food Spending CU is 2 people – a married couple, alone. They are 55>64 years old. They are White, but not of Hispanic origin. At least one has an advanced college degree and they both work in their own business. They earn $150 to $200K but are still paying for a mortgage on their house in a small suburb in the Midwest.