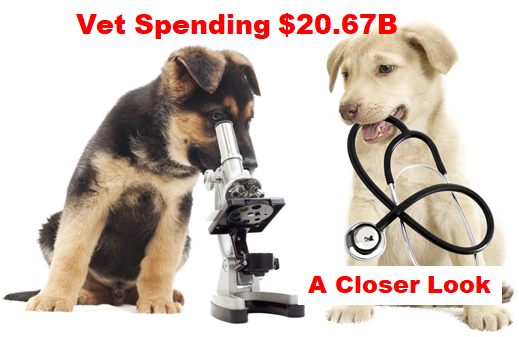 We have noted that 2017 was different. It was a year of Value. This was also true in the Veterinary segment. While prices did not deflate, inflation hit an all time record low rate. Consumers reacted by spending $2.56B (+14.1%) more on Veterinary Services. The best news was that half of the increase came from an increase in frequency of visits, +7.2%.

Let’s see which groups were most responsible for the bulk of Veterinary spending in 2017 and the $2.56B increase. The first chart details the biggest pet Veterinary spenders for each of 10 demographic categories. It shows their share of CU’s, share of Veterinary spending and their spending performance (Share of spending/share of CU’s). The differences from the product segments are immediately apparent. In order to better target the bulk of the spending we have altered the groups in three categories – income, occupation & age. Another big difference is the performance – 7 of 10 groups perform above 120%. This down from 8 in 2016 but is more than Supplies – 6 and Food – 5. This means that these big spenders are truly performing well but it also signals that there is a far larger disparity between the best and worst performing segments. Income is clearly the biggest factor in Veterinary Spending.  The categories are presented in the order that reflects their share of Total Pet Spending which highlights the differences of the 7 matching categories.

We changed 3 of the spending groups for Veterinary to better target the biggest spenders. Higher income is by far the biggest single factor in Veterinary spending. We see the impact of this in many groups as it often contributes to the big spending disparity between segments. The most notable changes were that the # of Earners became less important and spending skewed a little older.

Almost all of the best and worst performers are those that we would expect. However, there are 5 that are different from 2016. This is more than Supplies (3) but less than Food (7). However, 4 of the 5 changes were in just two categories. This indicates a greater stability in the overall market spending performance. The changes from 2016 are “boxed”. We should note:

2017’s increase of $2.6B built on the $1B lift in 2016. While 16 winners and losers changed, this was much less than in any other segment. 4 segments flipped from 1st to last or vice versa, once again an industry low. With the exception of Self-employed, there were no real surprises. In 4 categories, all segments spent more. Last year there were none. This appears to be a sign of more stable growth. Here are the specifics:

We’ve now seen the winners and losers in terms of increase/decrease in Veterinary Spending $ for 11 Demographic Categories. 2017 had strong growth in Veterinary spending, with fewer surprises than we saw in the products segments. Most of the winners were expected. However, while doing our analysis we saw indications that the growth was becoming somewhat more widespread. First and foremost of these, was the fact that 4 categories had no segments that spent less. However, there were also “hidden” segments that didn’t win but made a significant contribution to a successful 2017. These groups don’t win an award, but they certainly deserve…. 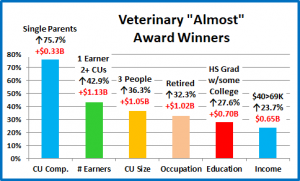 These segments all earned recognition. It is especially great to see the big increase from Single Parents. The other segments all testify to a deeper penetration of the $2.56B lift in Veterinary spending in many categories. In fact, only 18 of 99 segments spent less on Veterinary Services. That means that 82% spent more. We also have suggested that 1 Earner, 2+ CUs, HS Grads w/some College and the $40>69K income group were likely candidates to have increased Pet Ownership. An Increase in Veterinary spending supports that idea.

In 2015 and 2016 we saw a flip flop in Veterinary Spending – down the first year then up the next, as consumers traded $ with the Pet Food segment. In 2017 we had a unique situation in the industry. It was a year of value in all segments and the consumers took advantage of the situation. In the Veterinary segment we saw record low inflation. Consumers increased both the $ spent and visit frequency. This produced a $2.56B (14.1%) increase.

Veterinary services and spending should be a definite need, like Food, but there are many indications that it is becoming more discretionary and determined by income. It is very obvious when we look at performance. (Share Vet $/Share CUs)

The performance of other big spending groups is also very important in the Veterinary segment. We identified seven demographic categories with high performing large groups. (There were only 6 for Supplies and 5 for Food) .  Consumers have no control over Race/Ethnicity or Age but in addition to Income, Education, Homeownership, Occupation and Marriage are important factors in Veterinary spending. The high performance in these groups also demonstrates the big spending disparities among segments within these categories.

We saw very little change in these groups. There were 3 changes of note. The “Everyone Works” group lost market share and dropped out of the 120% club due to a strong year from 1 Earner – 2+ CUs and Retirees. The 2+ CU group had increased performance and disparity due to a strong year for 2 & 3 person CU’s and bad performance by singles. Veterinary spending also skewed older in 2017 so the big group changed from 35>64 to 45>74.

2017 was a strong year for the Veterinary segment and relatively balanced. 82% of all segments increased spending and in 4 categories all segments spent more. However, the biggest increases came from expected sources – 2 Person CUs, Married Couple Only, Mgrs & Professionals, White, Non-Hispanics, Homeowners w/Mtge. There were some good performances from groups that showed that gains were also being made in the middle ground. 1 Earner- 2+CUs, HS Grads w/some College, $40>69K and less populated areas (<2500) spent more on Veterinary Services. Our analysis of Food and Supplies suggested increased pet ownership in these groups. The Veterinary data supports that premise.

Finally – The “Ultimate” Veterinary Services Spending Consumer Unit consists of 2 people – a married couple only. They are in the 45 to 54 age range. They are White, but not of Hispanic origin. At least one of them has an advanced College Degree. Both of them work in Managerial positions and their total income exceeds $200K. They live in a small suburb, adjacent to a big city in the Northeastern U.S. and are still paying off the mortgage on their home.