Veterinary Services is the second largest segment in the Pet Industry. In recent years, a high inflation rate, over 3.5%, has caused a reduction in Veterinary visits and put spending on a rollercoaster ride. In 2016 spending increased 5.6%. However, in 2017 inflation slowed markedly and consumers responded. Spending reached $20.67B – Up -$2.56B (+14.1%) from 2016. In this report, we’ll take a closer look at the demographic drivers of the 2017 increase. (Note: Like 2016, all 2017 numbers in this report come from or are calculated by using data from the US BLS Consumer Expenditure Interview Survey, rather than their Diary report. The low frequency of Veterinary Visits is still generating an exceptionally high variation on the data collected by the Diary method. Interview seems to be a more logical and accurate way to track Veterinary Service Expenditures.)

We’ll take a closer look. But first, the chart below gives an overview of recent Veterinary Spending. 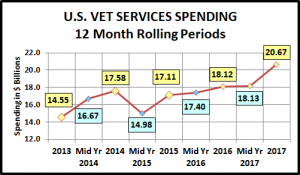 There was a big spending drop in the first half of 2015, which coincided with the upgrade to Super Premium Foods – Trading $. Then consumers began value shopping for Premium Foods. The subsequent savings freed up $ for Veterinary Services. Spending began to climb until it flattened out at the beginning of 2017. In 2017, inflation in the Veterinary Segment slowed markedly, especially in the second half. The result was that spending literally “took off”.

Now, let’s look at Veterinary spending by some specific demographics. First, here is a chart by Income Group

Although not as pronounced as Pet Services, Veterinary Spending is driven by income. This makes it very significant that every income level increased spending in 2017. The biggest lift came from the $70 >$150K group – up $1.53B (24.6%)

The 35>44 young GenXers and those over 75 spent slightly less. Everyone else spent more. In the detailed data below, be sure to note the changes in frequency. A reduction in visit frequency has been an ongoing problem…but not in 2017.

Now, let’s take a look at some other key demographic “movers” behind the 2017 Veterinary Spending increase.

2017 was definitely a great year for the Veterinary segment. As you look at the chart above you will see that 4 demographic categories – Income, Housing, Area Type and Race/Ethnic had no segments that spent less on Veterinary Services in 2017. The increase was truly widespread as 77 of 92 (83.7%) demographic segments spent more in 2017 than they did in 2016. The chart is basically loaded with the “usual” winners and losers.

However, there are 2 segments that are in an unusual position. Self-employed have a high average income so they are not normally a “loser”. However, in 2017 they dialed down their spending in every category but supplies. The level of the decrease was magnified by the fact that the number of “self-employed” households also fell 8.7%. Apparently, owning your own business became less popular in 2017. On the winning side, Homeowners w/o Mortgages is unusual. In 2017, they just edged out Homeowners with a mortgage by $0.2B. Their victory was fueled by a $1.0B spending increase from retired folks. This must have been “younger” retirees as the over 75 group spent less.

The continued high inflation rate in Veterinary Services has had a major impact on Veterinary spending since the great recession. The “new” value conscious consumer has rebelled against ever increasing prices. They have delayed or eliminated many routine procedures or sought alternative solutions. The spending in this “necessary” segment has become much more dependent on household income. People were visiting the Veterinarian less often, just paying more. This makes the 7% increase in frequency incredibly important as it indicates a definite change in spending behavior.

The why behind this change is a significant decrease in inflation. The CPI for Veterinary Services only increased 2.2% in 2017. This is the lowest rate since they began keeping records back in 1997. In fact, prices in the second half of 2017 only increased 0.7% – incredible. You saw the consumer response – a huge spending lift. But what comes next? In the first half of 2018, prices are up 1.7%. This seems high but it is actually the same as 2017. We’ll just have to wait and see.