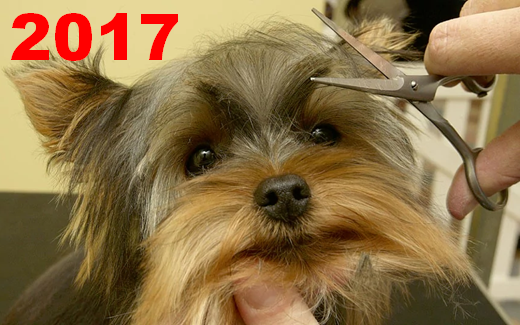 Non-Vet Pet Services has shown consistent growth in recent years. In 2017, spending fell -$0.07B to $6.77B, a (-1.0%) decrease from 2016. This was the first drop since 2010 – the great recession.  It is a minor decrease but as we drill deeper we will once again find that consumer pet spending behavior is becoming increasingly more complex. (Note: All numbers in this report come from or are calculated by using data from the US BLS Consumer Expenditure Surveys)

More specifically, the decrease in Pet Services spending came as a result of: 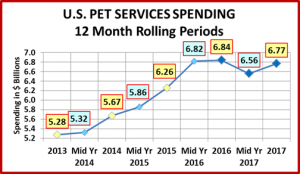 The growth was consistent until Mid-year 2016. In the second half of 2016, spending flattened out and then fell sharply in the first half of 2017. The second half of 2017 saw a spending rebound, but it was not quite enough. The pattern over the last 18 months coincides with a radically lower inflation rate. It appears that the price sensitivity in this segment is growing. Now, let’s look at some specific spending demographics. First, by Income Group.

The Age demographic also reflects a truly “mixed bag” in spending. Perhaps, the key observation is that the 65+ group, the fastest growing segment, is spending significantly more on Services. Here are the specifics:

Finally, let’s take a look some other key demographic “movers” behind the 2017 Pet Services Spending decrease.

The overall spending decrease was minor but the graph above gives some idea of the tumult that was going on within demographic categories. 53% of individual demographic segments spent less on Pet Services in 2017, while 47% spent more, so the ups and downs were relatively evenly divided.

In the graph above, about half of the winners are expected groups, like High Income and…

However, there are some definite surprise winners, especially…

There are some surprises in the “losers” column too.

So what caused all this turmoil? In a word – Competition. In 2017 there was a significant increase in the number of retail outlets offering Pet Services. For Pet Stores, the addition of Pet Services was one way to counteract the impact of the internet and the Mass Market. “You can’t get your dog groomed online…or in a SuperCenter!” More and more outlets began offering “one stop shopping” for all your pet needs. Convenience is a big consumer driver. However, the #1 driver remains price/value. The increased competition encouraged retailers to offer deals as they fought to gain new customers and keep existing ones. We saw this in the Services CPI. While it was not deflating, it had the second lowest increase since they began keeping records. Only 2010 had a smaller increase, which was due to the great recession.

So how can this affect Services spending? Lower prices and “deals” can attract new users or encourage existing customers to buy more or more often. Both of these increase revenue. However, it can also result in regular users spending less for the same services. There is another factor at work in Services Spending. It is the most discretionary of all the segments. This can result in consumers trading out Service $ to use in another segment, like a food upgrade. In 2017, we saw “all of the above” which created the turmoil.

Spending fell slightly in 2017, but we should remember… There were more users and they bought more often. They just spent a little less for their Services. This is not all bad news. What will happen next? In May of 2018 the Services CPI rose 2.5%, the biggest increase ever. We’ll have to wait and see…