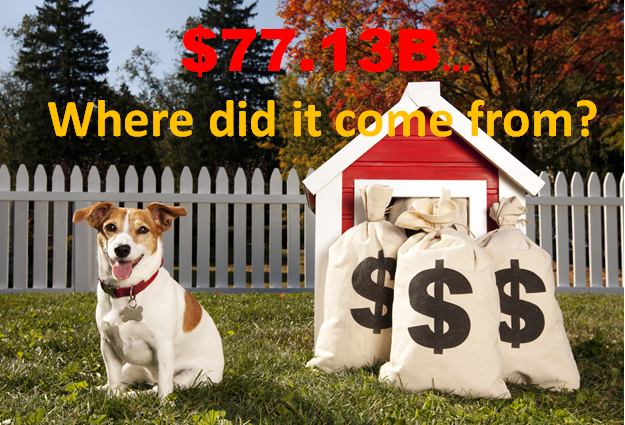 Total Pet Spending in the U.S. reached $77.13B in 2017, a $9.84B (14.6%) increase from 2016. These figures and others in this report are calculated from data in the annual Consumer Expenditure Survey conducted by the US BLS. It was a spectacular year for the industry, with the 3 largest segments registering double digit increases while Services spending fell less than 1%. The key factor in this consumer buying surge was value. Super Premium foods became more accessible in both location and price. Supply prices deflated, and both Service segments had record low inflation rates. Although the Service Segment spending fell, there was an increase in purchase frequency. Consumers just paid less. Consumers saw great value and they acted on it. This great success raises some interesting questions and deserves a closer look.

The first question is, “Who is spending most of the $77+ billion dollars?” There are of course multiple answers. We will look at Total Pet Spending in terms of 10 demographic categories. In each category we will identify the group that is responsible for most of the overall spending. Our target number was to find demographic segments in each category that account for 60% or more of the total. To get the finalists, we started with the biggest spending segment then bundled related groups until we reached 60%.

Knowing the specific group within each demographic category that was responsible for generating the bulk of Total Pet $ is the first step in our analysis. Next, we drill even deeper to show the best and worst performing demographic segments and finally, the segments that generated the biggest dollar gains or losses in 2017.

In the chart that follows, the demographic categories appear in ranked order by Total Pet market share from highest to lowest. We also included their share of total CU’s (Financially Independent Consumer Units) and their performance rating. Performance is their share of market vs their share of CU’s. This is an  important number, not just for measuring the impact of a particular demographic group, but also in measuring the importance of the whole demographic category in Spending. These are all large groups with a high market share. A performance score over 120% means that this demographic measure is extremely important in generating increased Pet Spending. I have highlighted the 6 groups with 120+% performance. This is up from 5 in 2016, as the 35>64 yr old age group joined the club.

The groups are the same as in 2016, but some rankings have changed. All Wage Earners, 35>64 yr olds and Married Couples gained in importance while # Earners and Education fell in the ranking.

Total Pet Spending is a sum of the spending in all four industry segments. The “big demographic spenders” listed above are determined by the total pet numbers. Although the share of spending and performance of these groups may vary between segments, every one of them generates a minimum of 55.1% of the spending in every segment. As we analyze individual segments, some of the groups will change to better reflect where most of the business is coming from.

The group performance is a very important measure. Any group that exceeds 120% indicates an increased concentration of the business which makes it easier for marketing to target the big spenders. Although Income over $50K is the clear winner, Homeowners and Married couples are also strong performers. The exceptionally high performance in all six 120+% groups also indicates the presence of segments within these categories that are seriously underperforming. These can be identified and targeted for improvement.

Most of the best and worst performers are just who we would expect and there are only 3 that are different from 2016. Changes from 2016 are “boxed”. We should note:

There was very little change in the “players”, so most expected segments are doing well. In the next section we’ll look at the segments who literally made the biggest difference in the success of 2017.

We’ll “Show you the money”! This chart details the biggest $ changes in spending from 2016.

In this section we will truly see the difference between 2017 and 2016. There are 22 Winners and Losers. None are repeats. In 8 cases the segments actually switched from the biggest increase to the biggest decrease or vice versa.

We’ve now seen the best overall performers and the “winners” and “losers” in terms of increase/decrease in Total Pet Spending $ for 11 Demographic Categories. Not every good performer can be a winner but some of these “hidden” segments should be recognized for their outstanding performance. In such a great year, there were a number of candidates, but I limited my choices to 6. They don’t win an award, but they deserve…. 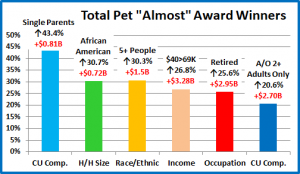 The 2017 performance of these groups doesn’t require a detailed explanation. The numbers on the chart demonstrate just how demographically widespread and significant the 2017 pet spending lift truly was.

Single Parents climbed out of the hole of being the perennial worst performer in their group. African Americans finished last in performance but still had a 30.7% increase. 2 Person CU’s “ruled” in 2017, but the biggest group, 5+ People was also up 30.3%. The $200K group was the best performer and the $100>150K group had the biggest increase, but the income range from $40>69K also spent $3.2B (26.8%) more in 2017. The focus was on the great year that was had by both Managers and Professionals and Blue-Collar workers, but Retirees also had a $2.95B increase. Finally, the spotlight was definitely on married couples only, but the 2+ Adults only group also did pretty well with a $2.7B increase. The good news was truly widespread. In fact, only 9 of 99 distinct demographic segments had a decrease. That means that 91% spent more.

2015 and 2016 brought turmoil to the market. There was a lift in spending in 2015 as many consumers upgraded to Super Premium foods, but they cut back on spending in other segments to help pay for it. In 2016 they began value shopping for food online and in stores. They used some of the money saved on food to spend on other segments, but not enough, as total spending fell slightly. Then came 2017, when the market was rampant with values. The Services segment saw increased purchase frequency, but consumers paid less. Other Segments had double digit increases and the movement to premium foods made a much deeper penetration across the market.

In 2017, on the surface, big changes weren’t immediately apparent. The demographic groups responsible for most of Total Pet Spending were the same as those in 2016. However, there were changes in their spending share rankings. The number of Earners and Higher Education became less important, while Marriage and Everyday Workers increased their influence. These were indications of a movement towards more spending equality in certain demographic categories.

In terms of performance, the most influential demographic big spending groups increased from 5 to 6, with the Top Three being Income, Home Ownership and Marriage. Knowing the demographic segments in these categories allows industry participants to more effectively target their best customers and… those most in need of improvement.

There was also very little change in the best and worst performing individual demographic segments. The most noticeable changes occurred in $. There were some surprising winners and “near winners” – Rural, Blue-Collar, HS Grads w/some College, $40>69K and Single Parents, to name a few. The most noticeable spending trends seem to be a movement towards more egalitarian spending in terms of income, education and occupation, along with significant growth in less densely populated areas. As always, to get to the heart of the matter and to more actionable data you must “drill down”. This will become even more apparent as we turn our analysis to the individual industry segments.

But before we go…The “Ultimate” Total Pet Spending Consumer Unit in 2017 consists of 2 people – a married couple, alone. They are in the 55 to 64 age range. They are White, but not of Hispanic origin. At least one of the them has an advanced College Degree. They both work as managers and are doing well  – over $200K. They’re working to pay off their house located in a lovely, small suburb of  a metropolitan area with a population of about 2,000,000 in the West.

2017 U.S. Pet Spending by Generation – The Boomers Bounce Back!