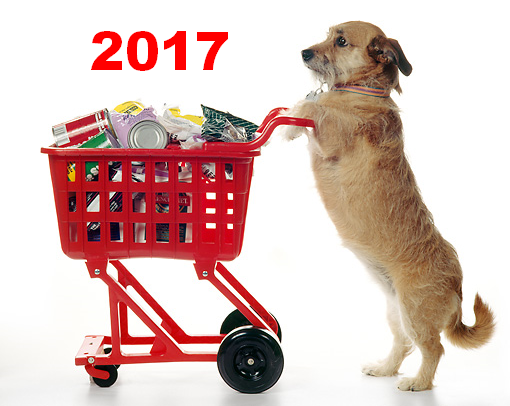 The U.S. Retail market reached $5.75 Trillion in 2017 from all channels – Auto Dealers, Supermarkets, Restaurants, Online retailers and even Pet Stores. This year’s increase of $235B (+4.3%) topped last year’s increase of $172B and was twice the increase from 2014 to 2015. One factor is that rising fuel prices have put Gas station revenue back on the plus side. (Data courtesy of the Census Bureau’s monthly retail trade report.)

In this report we will focus on the top 100 Retailers in the U.S. Market. These companies are the retail elite and account for 38% of the total market. The vast majority also stock and sell a lot of Pet Products. The retail market is constantly evolving which produces some turmoil – mergers, acquisitions, closures. As you will see, the Top 100 are not immune. The report does contain a lot of data but we’ll break it up into smaller pieces to make it more digestible. All of the base data on the Top 100 comes from Kantar Research and was published by the National Retail Federation (NRF).

The Top 100 is critically important and generally outperforms the overall market. However, in 2017 the difference was very slight. Remember, the Top 100 is really a contest. Every year companies drop out and new ones are added. This can be the result of mergers, acquisitions or simply surging or slumping sales. Here are some changes of note in 2017:

Now let’s start “drilling down” on the Top 100. Here’s a summary of Regular and Online Retailers versus the bundled total for Restaurants & Gas Stations.

Pet products are an integral part of the strongest retailers and are widespread across the entire U.S. marketplace. Of the Top 100, 142,000 stores carry at least some pet items at retail. There are thousands of additional “pet” outlets including 20,000 Grocery Stores, 10,000 Pet Stores, 16,000 Vet Clinics, 5,000 Pet Services businesses and more. Pet Products are on the shelf in over 200,000 U.S. brick ‘n mortar stores… plus the internet. 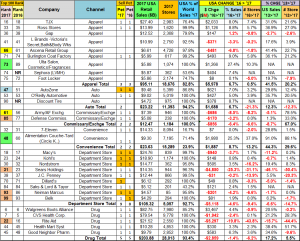 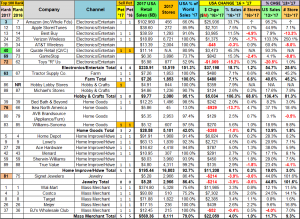 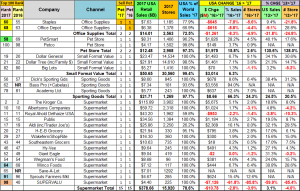 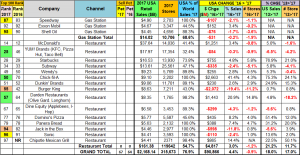 Although restaurants & gas stations aren’t relevant in terms of Pet Products Sales, they are relevant in our daily lives. Also, money spent on rising gas prices and eating out isn’t available to spend on our Pet Children.

The Top 100 became the Top 100 by producing big sales numbers so it’s not surprising that their performance exceeds the overall market. In 2015 it was more than double – 4.9% to 2.3%. In 2016 it was only 10% better and in 2017 it was only 2.3% better. Today’s incredibly competitive retail market is impacting even many of the biggest retailers in America.

Pet Products are an important part of the success of the Top 100. Sixty-seven companies on the list sell Pet Food and/or Supplies in 142,000 stores and/or online. Let’s take a closer look at the fifty-seven companies that stock pet products in their stores. This group generated $1.75T in total sales. How much was from pet? Let’s “Do the math”. If we take out the $12.5B done by PetSmart and Petco and the remaining companies generated only 1.5% of their sales from Pet, we’re looking at $26B in Pet Products sales from only 55 “non-pet” sources! (Note: The 1.5% share for Pet items is a low end estimate based on data from the U.S. Economic Census.) The APPA reported $43B in Pet Food and Supplies sales for 2017. That means that 55 mass market retailers accounted for 60% of the Pet Products sold in the U.S. in 2017 and… it gets even more focused.

PetSmart & Petco, plus 15 Mass Market Retailers probably account for 75% of all the Pet Products sold in the U.S.

Pet Products are widespread in the retail marketplace but the $ are concentrated. Regardless of your position in the Pet Industry, monitoring the Top 100 group is important. This group also reflects the ongoing evolution in the retail market. We see the growing influence of the internet and importance of Value. The Intense competition is evident in the turmoil of mergers & acquisitions. In business, just like in biology, you must adapt to a changing environment or face extinction!

Finally, here is a link to download the 2017 Top 100 Retailer Excel file so you can do your own analysis.