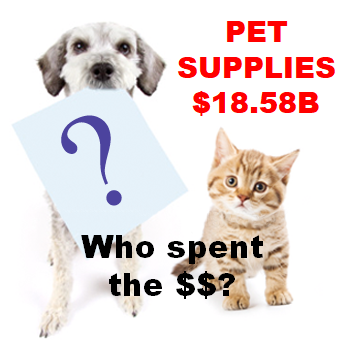 Next, we’ll turn our attention to Pets and Supplies. We’ll see some differences from Pet Food as the spending in the Supplies segment is more discretionary in nature. There are other factors too. Many supplies categories have become commoditized so pricing changes (CPI) can strongly impact Consumers’ buying behavior in this segment. Supplies’ Spending can also be affected by the spending behavior in other segments, especially Food. Consumers often trade $ between segments. In 2015 Consumers spent $5.4B more on Pet Food. They helped pay for this by spending $2.1B less on supplies. In 2016, things turned around as Consumers value shopped for premium foods but spent $0.94B more on Supplies. 2017 was different. It was a year of across the board value. Consumers reacted and spent significantly more in 3 industry segments, including Supplies – +$2.74B, a 17.3% increase.

Let’s see which groups were most responsible for the bulk of Pet Supplies spending in 2017 and the $2.74B lift. The first chart details the biggest pet supplies spenders for each of 10 demographic categories. It shows their share of CU’s, share of pet Supplies spending and their spending performance (Share of spending/share of CU’s). Although their share of the Pet Supplies $ may be different from their share of the Total Pet $ or Food, all of the big spending groups are the same. The categories are presented in the order that reflects their share of Total Pet Spending. This highlights the differences in importance. All 10 of the big groups have over a 60% market share. Pet Food had only 7. We’re also back to 6 groups with performance of over 120%. Pet Food had only 5 as Education dropped out. Higher Education correlates with higher income and income is more important in supplies spending. In Pet Supplies spending, Homeowners and Married couples had a big gain in share and the 35>64-yr olds entered the 120+% performance club for the first time. The Everyone Works group had a big drop in share as the # of Earners in a CU became less important. Also, of note, Suburbanites have a significantly larger share of spending on Supplies than they do for Food.

The biggest spending groups for Pet Supplies are the same as Total Pet and Pet Food. However, the discretionary nature of Supplies causes spending to be more impacted by income than Food. Groups associated with higher income, like Education and # Earners, have higher performance than in Food. Homeownership and Marriage had the most growth in Supplies $. Having 6 groups with 120+% performance also indicates greater disparity between segments.

Almost all of the best and worst performers are those that we would expect. In Pet Supplies spending, there are only 2 that are different from 2016. That is the least change of any segment, 5 fewer than Pet Food and 1 less than for Total Pet. As we move deeper into the data, we will start to see even more differences between the Industry Segments. Changes from 2016 are “boxed”. We should note:

In 2017 Supplies Spending was up $2.74B, continuing the lift which began in the second half of 2016. There are only 3 repeats – 2 winners and 1 loser. 4 segments switched from last to first or vice versa. 1 Earner, 2+ people CUs was a surprise winner, but the biggest news came from just looking at the overall chart. In 9 of 11 Demographic Categories every segment increased spending on Supplies. Admittedly, some increases were small, but an increase is an increase. This shows just how widespread the big lift in Supplies $  was in the overall market. Here are the specifics:

We’ve now seen the winners and losers in terms of increase/decrease in Pet Supplies Spending $ for 11 Demographic Categories. Overall, 2017 was a year of widespread strong growth. The first indication of this was that 9 of 11 categories had no segments that spent less on Supplies. We also saw many of the traditionally strong performers rise to the top again. There was only 1 surprise winner, 1 Earner – 2+ CUs. There were some really big winners – 5 segments generated at least half of the Total $2.74B. However, not every good performer can be “the” winner and some of these “hidden” segments should be recognized for their outstanding performance. They don’t win an award, but they deserve… 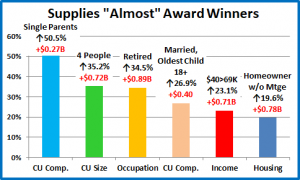 The numbers from these segments certainly merit their recognition for Honorable Mention. They also provide further evidence of just how widespread and deep the lift in Supplies’ spending was – Single Parents, 4 People CUs, Retirees, even lower middle-income CUs – $40 to $69K. America spent more on Supplies in 2017. There is another fact that irrefutably shows this. Of 99 individual demographic segments, only 6 had a decrease in Supplies spending. That means that 94% spent more. The problem was limiting this list to 6.

While Pet Food spending has shown a definite pattern, Pet Supplies have been on a roller coaster ride since 2009. Many Supplies categories have become commoditized and react strongly to changes in the CPI. Prices go up and spending goes down…and vice versa. Supplies spending has also been reactive to big spending changes in Food. Consumers spend more to upgrade their Food, so they spend less on Supplies – trading dollars. We saw this in 2015. Then in 2016 the situation reversed. Consumers value shopped for Food, so they spent some of the “saved” money to increase their spending on Supplies.

That brought us to 2017. It turns out that 2017 was to be significantly different. Both Supplies and Food prices deflated. At the same time the inflation rate in both of the Services segments dropped to lows not seen in recent years or in the case of Veterinary, not seen ever before. Value was the “word” and it was available across the market. One of the first things that we noted was the strong evidence that the upgrade to super premium significantly penetrated the consumer market with major lifts from unexpected demographics like Blue-Collar Workers, HS Grads w/some College, 1 Earner- 2+ CUs and lower middle-income groups. This could have negatively impacted Supplies Spending. However, it didn’t. Supplies’ spending increased in these segments, but it also was very strong in the groups that we have come to expect to be the leaders – Homeowners w/Mtge, Managers & Professionals, College Grads and Married Couples. With an increase in 94% of all segments, there was good news everywhere. We returned to a new “normal”, which far exceeded the old.

Among the demographic categories in which a consumer has some control, Higher Income, Marriage, Homeownership and Higher Education are still the biggest factors in increased Supplies spending. Homeownership and Marriage both increased significantly in importance and influence in 2017. While Income remained firmly at the top of the list, there were other changes related to Income which broadened the market for Supplies. The # of Earners became much less of a factor and there also were significant spending gains coming from lower middle-income groups.

Although it is not an absolute necessity like Food, the spending behavior on Pet Supplies can also be a reflection of the percentage of pet ownership across a demographic category. In our analysis of Food spending we suggested that part of the spending increase in unexpected segments may have been derived from an increase in the CU percentage of pet ownership. While not as dramatic as the food increase, all these groups also increased Supplies spending which would add support to the premise of more new Pet Parents.

The other trend that we saw in Food spending was a “movement” for more space – Rural Areas and Suburbs <2500. While not as dramatic as the lift in Food, those 2 areas also had the biggest Supplies spending lift in the category, +29%.

Finally – The “Ultimate” Pet Supplies Spending Consumer Unit consists of 4 people – a married couple, with 2 children, the oldest is over 18. They are in the 45 to 54 age range. They are White, but not of Hispanic origin. At least one of them has an advanced College Degree. Both of them work, running their own business and their oldest child just started a part time, after school job. They’re doing well with an income over $150K. They live in a larger suburb, adjacent to a big city in the Western U.S. and are still paying off the mortgage.