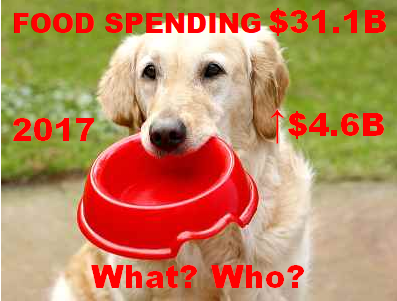 As we continue to drill ever deeper into the demographic Pet spending data from the US BLS, we have now reached the level of individual Industry segments. We will start with Pet Food, the largest and arguably most influential of all. Previously we have noted the trendy nature of Pet Food Spending – 2 years up then spending goes flat or turns downward for a year. In 2015 Pet Food Spending increased by $5.4B as a significant group of consumers upgraded to higher priced Super Premium Foods. In 2016 they value shopped and spending fell $2.99B. In 2017, spending increased by $4.61B (+17.4%). Indications from our Pet Products spending analysis are that this was driven by a deeper market penetration of premium foods along with increased pet ownership. Let’s take a closer look.

The big spenders for Pet Food are the same as those for Total Pet and Pet Products but generally have a lower market share and performance. Pet Food spending was up $4.6B in 2017. We have strong initial indications that much of the lift came from a deeper penetration in terms of premium food and even increased pet ownership. Income is still important, but Occupation, # of Earners and Higher Education became markedly less so. Let’s drill deeper.

Even as we drill down to the Industry segment level, many of the best and worst performers are the ones that we would expect. In Pet Food spending, there are  7 that are different from 2017, which is 4 more than for Total Pet. It is the same number as Pet Products but only 3 are “matches”. From this point on we will start to see more and more differences between the Industry Segments. Changes from 2016 are “boxed”. We should note:

There are no repeats – winners or losers, from 2016. 9 of the 22 segments (41%) flipped from 1st to last or vice versa. The surprise performance winners, Blue-Collar, HS Grads w/some College, 1 Earner – 2+CU’s and Rural are all here. Plus, the lower middle-income group, $40>69K also showed us the money. It is at this level where the demographic uniqueness of the different industry segments truly shows up. Here are the specifics:

We’ve now seen the “winners” and “losers” in terms of increase/decrease in Pet Food Spending $ for 11 Demographic Categories. Some winning segments in $, like Blue-Collar workers, HS Grads w/some College, 1 Earner- 2+ CUs and the $40 to  $69K income group reinforce our initial observations of increased demographic spending equality as a result of a spread of the premium food upgrade and even the addition of new pet households. We have recognized 11 “winning” segments that drove the $4.61B increase in Pet Food Spending. However, not every good performer can be a winner. Some “hidden” segments should be recognized for outstanding performance. They don’t win an award, but they get… 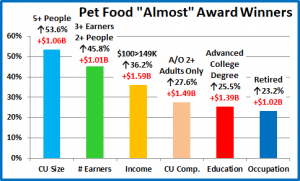 Some of the Honorees, like 5+ CUs, Adults only 2+ CUs and Retirees further support just how wide and deep that the increased spending penetrated the market. Others like 3+ Earners, $100>149K income and CUs with Advanced College degrees show that spending increases also occurred with many of the “usual suspects”.

The Pet Food Spending increase was truly widespread. In fact, only 17 of 99 demographic segments spent less on Pet Food in 2017. That means that 83% spent more.

After the big spending drop in 2016, 2017 brought a $4.6B increase in Pet Food Spending. This fit right into the pattern of two years up followed by a flat or declining year. However, the 2017 Spending lift was different from the $5.4B increase in 2015. In 2017 we didn’t see consumers trading out $ in other segments to spend on upgraded Food. Both the Supplies and Veterinary segments also had double digit growth.

The increase in 2015 was driven by a movement to upgrade to super premium pet food by a substantial portion of consumers. These consumers were generally more educated, often worked as managers or were self-employed and had higher incomes. In 2016 this group began value shopping for their new food and found great deals online and in some stores, which drove spending down. That brought us to 2017. There was an extremely competitive environment with increased availability and value everywhere on these high-quality foods. This attracted the attention of a different group of consumers. The benefits of upgraded food are apparent to most Pet Parents. Now, they became a viable option for a much larger group. The upgrade “epidemic” spread to HS Grads w/some College, blue-collar workers and even to low middle income groups. It also primarily “infected” those 35 and over, especially the 55 to 65-yr olds.

Although the penetration also increased in some of the traditional groups such as managers/professionals and those with advanced College degrees, it was primarily driven by more balanced spending in a number of demographic categories. Income, homeownership and marriage remain the most important factors in Pet Food Spending. However, the amount of necessary income has been dialed back and your occupation and the number of earners in the CU has become far less important. Higher Education has also become less of a factor. There was another trend of note. Pet Food Spending sought “more space” as Rural areas and Suburbs with a population of under 2500 had a banner year.

Any analysis of Pet Food spending is always very important because of the unique nature of the segment. It is the only Industry Segment that is an absolute spending necessity. If you are a Pet Parent, you must buy food for your pet children and buy it regularly. In fact, every week over 21,000,000 U.S. households buy pet food and/or treats.

Because it is an absolute necessity, the spending behavior on Pet Food is perhaps the most important reflection of the percentage of pet ownership across a demographic category. We have focused on the spread of the premium upgrade as the driver behind the increase. However, there may have been an additional trend at work. The APPA reported an increase in Pet H/Hs from 65% to 68%. The radical increase in Pet Food spending by the segments that we have noted can support both a food upgrade and new pet H/Hs…and help identify the likely new pet parents.

Finally – This year’s “Ultimate” Pet Food Spending Consumer Unit is 2 people – a married couple, alone since their last child moved out and took “his” dog. They are in the 55 to 64 age range. They are White, but not of Hispanic origin. Neither attended College but both received special job training. Only “Dad” still works (too much) at a nearby power plant. With overtime, he will break $100K. Their house is in a rural area in the Midwest and they have a mortgage. They got back in the Pet Parenting “business” after their son left home by adopting a pair of dogs from a local shelter.