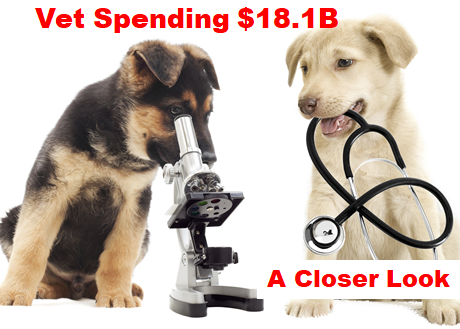 Now we will move to the Service Segments – first up is Veterinary Services. We’ll see some big differences from the Product Segments. Veterinary Services prices have had years of high inflation. This has resulted in CU income becoming the most dominant factor in spending behavior. We’ll see the impact of this in many demographic categories. Veterinary Spending is also affected by the spending behavior in other segments. In 2015 Consumers spent $5.4B more on Pet Food. They helped pay for this by spending $0.47B less on Veterinary Services. In 2016, things turned around as Consumers value shopped for premium foods but spent $1.01B more on Veterinary visits. This lift more than made up for the drop in 2015 and got this segment back on the right track. Regular Veterinary care is definitely “needed” but the skyrocketing prices have forced many Pet Parents to delay or even forego procedures, which is an unfortunate result.

Let’s see which groups were most responsible for the bulk of Veterinary spending in 2016 and the $1.01B increase. The first chart details the biggest pet Veterinary spenders for each of 10 demographic categories. It shows their share of CU’s, share of pet products spending and their spending performance (Share of spending/share of CU’s). The differences from the product segments are immediately apparent. In order to better target the bulk of the spending we had to alter the groups in two categories – income and occupation. Another big difference is the performance level. 8 of 10 groups have a performance level above 120%. This compares to 5 for Supplies and only 4 for Food. It means that these big spenders are truly performing well but it also signals that there is a far larger disparity between the best and worst performing segments. Income is absolutely the biggest factor in Veterinary Spending.  The categories are presented in the order that reflects their share of Total Pet Spending which highlights the differences of the 8 matching categories.

We changed 2 of the spending groups for Veterinary to better target the biggest spenders. Higher income is by far the biggest single factor in Veterinary spending. We see the impact of this in many groups as it often contributes to the big spending disparity between segments. Spending Disparity may be the norm in this segment. Consider the fact that the Veterinary segment has 8 big spending groups with a spending performance of 120+% . Supplies had 5 and Food only 4.

As usual, most of the best and worst performers are those that we would expect. However, there are 6 that are different from 2015. That is the same as Pet Food. However, 5 of the 6 changes were in the worst performance. The impact of higher income is once again evident as Veterinary spending performance is more volatile among the lower income segments in each category. Changes from 2015 are “boxed”. We should note:

2016 was up $1.01B after a $0.47B drop in 2015. This produced a lot of changes. There was only 1 repeat winner and 2 repeat losers. In 5 cases, last year’s loser was this year’s winner and in 5 other cases, the opposite occurred. In fact, in 3 categories both the winner and loser from 2015 swapped positions. The size of the changes was also surprising as were some of the winners – Renters, Associates’ Degree, Central City and CU’s with young children. Here are the specifics:

We’ve now seen the winners and losers in terms of increase/decrease in Veterinary Spending $ for 11 Demographic Categories. 2016 was a year of big $ changes and we saw a lot of winners and losers from 2015 switching places in 2016. The impact of income on spending was evident in many categories. The increased commitment to the Veterinary segment by the younger groups was also very apparent. The $1.01B spending increase in 2016 more than made up for the $0.47B drop in 2015. It’s time to note that there were other segments that weren’t “winners” but made a significant contribution to a successful 2016. They don’t win an award but they deserve… 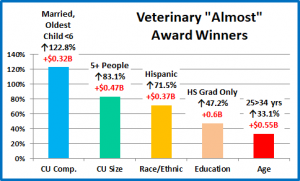 Veterinary spending was up $1.01B in 2016. The increase more than made up for the $0.47B drop in 2015. Demographically, it was evenly split, as 41 of 82 segments (50%) spent more. The “almost” winners in the chart reinforce the performance of the younger Americans and show that you don’t need to have a College degree to take your Pet to the Vet. The Hispanics also bounced back after a tough 2015. These 5 segments didn’t win any awards but their combined Veterinary spending increase totaled $2.31B – impressive!

In 2015 the huge spending increase generated by consumers who opted to upgrade to Super Premium pet food was partially paid for by decreases in spending on Veterinary Services (-$0.47B) and Supplies (-$2.1B). In 2016 consumers looked for the best price on their Food and the Veterinary segment got their money back and more with a $1.01B increase. This was much better than Supplies which regained less than half of the lost ground.

Veterinary services and spending should be a definite need, like Food, but there are many indications that it is becoming more discretionary, at least among demographic segments with low or even middle incomes. 50% of all CU’s have an income of $50K or less. In 2013 they generated 33% of all Veterinary spending. In 2016 it was 18%. But it is just not the lowest incomes. 77% of U.S. CU’s have an income of $100K or less. Their share of Veterinary spending is down from 70.4% in 2013 to 54% in 2016. Money shouldn’t matter so much in a category that is so important to the health and well-being of our pet companions. As a reaction to the rapidly rising prices, many Pet Parents are choosing to delay or even forego entirely some Veterinary services. They are also actively seeking alternatives. We have seen this in the meteoric rise of medications and supplements, especially in treat form, and even at retail, where some outlets offer a “Veterinary day” when consumers can bring their pets to get services like vaccinations at big discounts from clinic prices.

The performance of the bulk of the spenders is also very important in the Veterinary segment. We identified six demographic categories with high performing large groups. (There were only 3 for Pet Food)

The big players in these groups all generate increased Veterinary spending and are categories in which the consumer can exercise some degree of control. The Racial/Ethnic and Age Categories also have high performers but consumers have no control over inclusion in these groups. The performance of segments within these categories allows industry participants to target both their best customers as well as those most in need of improvement, but it also truly highlights the tremendous demographic disparities in Veterinary Spending.

Perhaps because Veterinary spending is so driven by income, there was a lot of turmoil in 2016, first among the worst performing individual segments – with 5 new losers. However, it was most apparent in the segments with the biggest changes in $. 19 of 22 winners and losers in spending $ were different from 2015. In fact, 10 segments actually swapped winning in 2015 for losing in 2016 or vice versa. There were 2 major trends of note:

Finally – The “Ultimate” Veterinary Services Spending Consumer Unit consists of 3 people – a married couple, with their 18+ year old child. They are in the 55 to 64 age range. They are White, but not of Hispanic origin. At least one of them has an advanced College Degree. Everyone works in the household. The parents have their own business which is doing well, generating an income of over $200K. Their child works part time while going to school. They live in a small suburb, adjacent to a big city in the Northeastern U.S. and are still paying off the mortgage on their home.