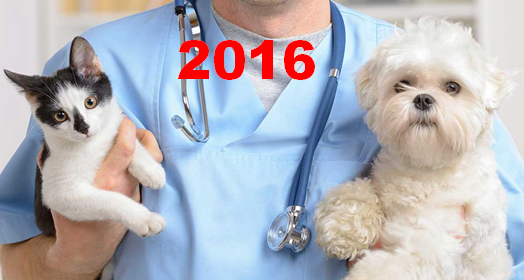 Veterinary Services is the second largest segment in the Pet Industry. A high inflation rate, over 3.5%, has put spending on a rollercoaster ride with today’s more price sensitive consumers. In 2016, spending was $18.12B – Up -$1.01B (+5.9%) from 2015. In this report, we’ll take a closer look at the demographic drivers of the increase. (Note: All 2016 numbers in this report come from or are calculated by using data from the US BLS Consumer Expenditure Interview Survey, rather than their Diary report. The low frequency of Consumers’ Veterinary Visits generated an exceptionally high variation on the data collected by the Diary method so I chose to use the data from their Interview survey. This seems to be a more logical and accurate way to track Veterinary Service Expenditures.)

We’ll need to take a closer look. But first, the chart below gives an overview of recent Veterinary Spending. 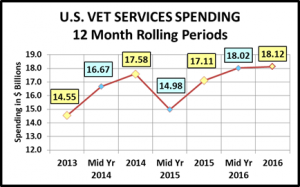 After the precipitous drop in the first half of 2015, spending began to climb until it flattened out in the second half of 2016. The 2015 Food spending upgrade and then the subsequent savings accrued by value shopping both affected the availability of funds for spending on Veterinary Services. Now, let’s look at Veterinary spending by some specific demographics. First, here is a chart by Income Group with these highlights:

At first glance, the increases from 2015 and even from 2014 seem to be driven solely by the higher incomes, over $70K, which is not unexpected with the high inflation rate. Although when you look closer, the story becomes more complex.

It is immediately obvious that in 2016 the younger generations stepped up in terms of Veterinary Spending.

Now, let’s take a look at some other key demographic “movers” behind the 2016 Veterinary Spending increase.

With a high inflation rate, there is no doubt that higher income will always be a driver in this industry segment. However, we have seen many instances when a particular demographic group’s commitment to their Pets’ welfare overcomes financial pressures and they just spend the money. In 2015 it was the oldest consumers, the 75+ group. In 2016 it was the younger groups. Millennials and Gen Xers made the commitment to their Pet children and sharply increased their frequency of visits to Vet Clinics and the amount that they spent.

Because age is a major factor in this year’s lift in spending, you will see the impact across a variety of demographic measures. The younger crew is more likely to have a large number of  households living in the central city, renting their homes, with 4+ people and all their kids being under 18. All these demographics showed a significant increase in Veterinary Spending in 2016.

The over $200K group again made a significant contribution to the increase but it was even more important that all the adults in the household worked. All wage and salary earners and 2 earner households both made a greater positive impact on Veterinary spending than even the highest income group.

On the downside, the over 65, retired group cut back on Veterinary spending as they moved to upgrade their food. It was not all down for the older Americans in 2016 as the 55>64 yrs old households staged a significant comeback after the big drop in 2015, which came as a result of their Food upgrade.

It becomes increasingly obvious that the spending in all the Pet Industry segments is interrelated. A major spending trend in any one segment can and does, affect the others. In 2016 the most important spending behavior trend in the Veterinary Segment was the younger groups’ demonstration of a significant increase in commitment to Veterinary Services. This bodes well for the future.