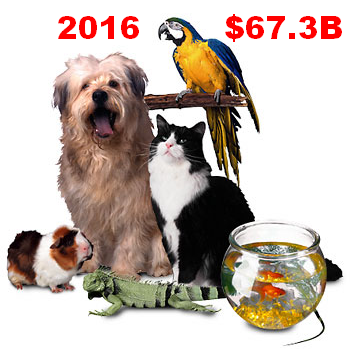 Let’s see how these numbers blend together starting at the household level. In any given week, 27.1 Million U.S. Households (1/5) spend money on their Pets – food, supplies, services, veterinary or any combination.

If 65% of U.S. H/H’s are pet parents, then their annual H/H Total Pet Spending is $799.34. Let’s look at the recent history of Total Pet Spending. The rolling chart below provides a good overview. (Note: All numbers in this report come from or are calculated by using data from the US BLS Consumer Expenditure Surveys – The 2016 Total includes Veterinary Numbers from the Interview survey, rather than the Diary survey due to high variation) 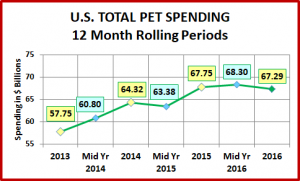 Let’s look at some Demographics. First, 2016 Total Pet Spending by Income Group. The chart has these highlights:

Income Recap – There is a growing price sensitivity across America. In 2016, this was demonstrated by consumers across almost all income groups value shopping for Pet Food. This had a huge impact on Total Pet Spending.

Since 2014, the $30>99K income group – middle America, spent less, especially on Vet Services. The <$30K group, often the youngest and oldest H/Hs, increased their spending in all but Supplies. The $100K> group also had increases in all segments but Supplies. However, the big “heroes” are the $150K> group. In fact, without the $3.1B increase in spending by this highest income group, the Total Spending for the whole Pet Industry would have been down -$0.13B from 2014.

Since 2014, only the Service Segment had an increase in all groups. Veterinary spending fell in the older groups while it gained in importance with the younger Households. In terms of products – Food and Supplies, value shopping came to the forefront. Consumers looked for higher quality at the best price. The 25>34 year olds were the only group with decreased spending from 2014. Their drop came only in Food & Supplies. They are the best “connected” of any group. It’s possible that the decrease came because they were ahead of the curve in value shopping, especially on the internet.

Take a look at some Key Demographic “Movers” for 2016. It should give you a better picture of the situation.

Summary: In building my research database, I gathered Pet Spending information for 12 demographic categories with over 80 specific segments. Nothing, including the Pet Industry, is simple anymore. Total Pet Spending was down -$0.46B (-0.7%), but only one of the 80+ individual demographic segments had a decrease in all Industry segments – the $100>149K income group. (last year’s best performer) There were 3 segments that had across the board spending increases: H/H’s that lived in Central Cities, H/H’s with 2 or more unmarried adults and no children and H/H’s where the highest education level was an Associates’ Degree. These are certainly not the demographic stereotypes of the “ideal” U.S. Pet H/H’s. However, their increases along with the increased spending by Renters, 4 people H/H’s, 2 earner H/H’s and in fact, the whole Under 45 group, reinforced the “youthful” nature of the best pet spending performances in 2016.

On the downside, the biggest decreases came from groups that are the usual Pet Spending Winners – suburban & rural H/H’s, College Grads, Married couples only or those with a child over 18 and even the 55>64 year old “Boomers”.

2016 was definitely “different” in Pet Spending Behavior. The Key factor was the huge drop in Pet Food Spending – a $2.99B decrease after a record shattering $5.4B increase in 2015. The 2015 increase came from a big share of H/H’s opting to upgrade the quality of their Pet Food. However, the 2016 spending drop didn’t primarily come from these consumers reneging on this commitment. It came from them seriously shopping for the best price – in a store or on the internet. This value shopping phenomenon appears to have caught on across virtually all income groups and will undoubtedly affect the future spending behavior across all industry segments, not just products. The Service Segments, especially Veterinary, have been strongly inflating. Price matters and it can and will affect which services are purchased and/or the frequency.

There is also no doubt that strong spending trends, up or down, in one segment affect the spending in others. Whether or not this is a conscious decision by Pet Parents is not known. However, the correlation is there – time after time.

I will wrap this up by saying that there appears to be only one “sure” demographic bet in Total Pet spending. The households with incomes over $200K (5.6%) will continue to increase their spending on their Pet Children.