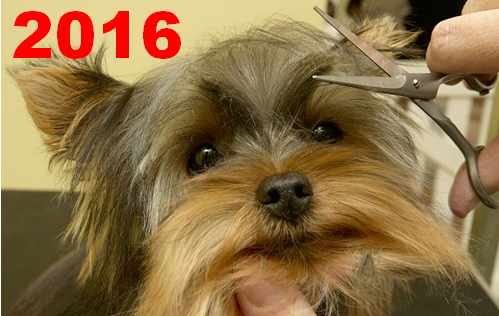 Non-Vet Pet Services is the smallest industry segment but it continues to grow and 2016 was another good year. Spending reached $6.84B, a 0.58B (9.3%) increase over 2015. However, you will see that, like the other Segments, consumer spending behavior is becoming increasingly more complex. (Note: All numbers in this report come from or are calculated by using data from the US BLS Consumer Expenditure Surveys)

The following chart gives a visual overview of recent spending on Pet Services. 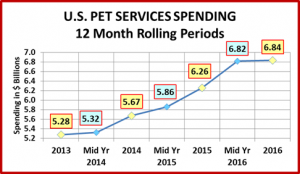 The growth has been consistent since 2013 but the pattern changed in 2016. In 2014 & 2015, the strongest lift in spending occurred in the second half. In 2016, virtually all the growth came in the first 6 months as the second half was essentially “flat”. While prices didn’t drop, the inflation rate slowed markedly at mid-yr 2016. Price may be becoming more of a factor in this segment. Now let’s look at some specific spending demographics. First, by income group.

As you can see, the 2016 increase is being driven by 2 disparate groups – H/H’s just below the average income of $74K and the upper tier, those making over $150K per year. All incomes, except the $70>100K group, have increased spending on Services since 2014.

The Age demographic reflects a more definite spending pattern than Income. Older Americans, especially those from 55>74, strongly increased spending on Services. The younger groups, particularly the 35>44 Gen Xers cut back. It should be noted that as the Baby Boomers age, the number of H/H’s over age 55 is growing. While the number under age 54 is currently shrinking. There are fewer Gen Xers. The Millennials have greater numbers but they are slower in establishing independent financial households than any group since 1880.

Finally, let’s take a look some other key demographic “movers” behind the 2016 Pet Services Spending increase.

Although some consumers definitely “need” the assistance of Pet Services, the spending in this segment is generally viewed as more discretionary than in any other. Convenience is often the key driver. Since convenience usually costs more money, income can make a significant difference in spending behavior. In 2016, households with incomes above $100k (20.5%) accounted for 53.3% of all Pet Services spending. This is up from 43.6% back in 2013 so the trend is actually becoming more pronounced. Not only current spending, but also the growth in the Services segment, is being driven by the over $100K households. Spending on Pet Services has increased $1.56B since 2013 and 86% of this gain came from the over $100K households.

With that being said, in 2016 there was also a window of growth in the lower middle income group, $30>69K. The effect of this can be seen in the small growth by a whole variety of demographic segments – married couples only, married couples with children of any age – as long as there were 4 or less in the total household, center city dwellers and those with an associates’ degree.

Age is also a big factor. The age groups from 45>74 are the only ones that spent more than the national average on Pet Services in 2016. They make up 51.6% of H/Hs and spent 69% of the total Services $, up from 63% in 2013. They also accounted for an incredible 90% of the Services’ spending increase since 2013. It should be noted that age and income go hand in hand with most of this group. The 45>54 group has the highest income and 55>64 ranks third. However, there is also an increasing need for Services in the 65>74 group, but with significantly reduced income. The 55>64 year old Baby Boomers saved some money in 2016 by value shopping for premium Pet Food. They spent some of this savings on additional services. The 65>74 group, with a growing number of boomers, did the same. You can see the impact of this older group in the increased spending by retirees, Homeowners with no mortgage and the 30>69K income group.

Service spending is driven both by convenience and need. The prices have been inflating at a 2.5% annual rate. With much of the spending coming from higher incomes, there has been little impact on spending. However, we have seen that price has become a major factor in the buying decisions made by virtually all Americans. In 2016 this could have finally impacted Services. While spending for those making over $200K went up $0.31B in 2016, the spending fell for the mid to upper income group making $70>149K per year. Also, the inflation rate fell to 1.5% in the second half of 2016 and has dropped even further to 1% in 2017. This is generally an indication of competitive pressure. Pet Services is the only Industry segment that has shown increased spending every year since 2011, with an average annual growth rate of 9.4%. We’ll see what 2017 brings.