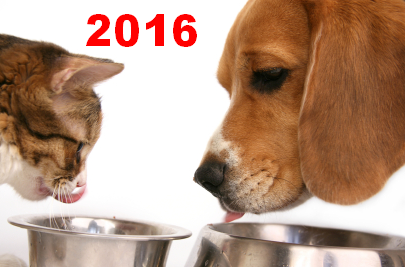 The U.S. Pet Industry had basically a “flat” year in 2016. Spending fell slightly to $67.29B, down $0.46B (-0.7%). However, as we have learned, the industry truly is a “sum” of its integral segments. Each segment has very specific and often very different buying behavior from the many consumer demographic segments. For this reason, we’re going to analyze each of the segments first. This will put the final analysis of Total Pet Spending into better perspective. Note: The numbers in this report come from or are calculated by using data from the current and past US BLS Consumer Expenditure Surveys. In 2016, this was gathered by the U.S. Census Bureau from over 40,000 interviews and spending diaries. The final data was then compiled and published by the US BLS.

We will start with the largest Segment, Pet Food (and Treats). In 2016 Pet Food Spending totaled $26.5B in the U.S. This is a $2.99B (-10.1%) decrease from 2015. For most of us, this is quite a shock coming after the spectacular $5B increase in 2015 which was attributed to consumers upgrading to Super Premium Foods. Doesn’t Pet Food Spending just increase every year? Isn’t that a sure bet? Well, as it turns out, the story is a little more complex than that. The following chart documents annual Pet Food Spending since 1997 in full Retail Dollars and adjusted for inflation.

An interesting pattern is immediately apparent. Retail Pet Food Spending increases for 2 consecutive years then reaches a plateau year or even drops. The pattern is repeated with one notable exception – the time from 2006 to 2010. As you recall, this was a tumultuous period for the entire retail marketplace. In 2009 the Great Recession caused the first drop in U.S. Retail Spending since 1956. The situation in Pet Food was even more complex with the Melamine recall in 2007. Pet Food Prices skyrocketed in 2008 and 2009 as consumers insisted on made in USA products …with USA ingredients. The CPI adjusted sales show that the first Recession related impact on Pet Food purchases occurred in 2009 but the full retail impact wasn’t felt until 2010.

Pet Food seems to be driven by short term trends. A new food trend “catches the consumers’ attention” and grows…for 2 years. Then sales plateau or even drop…and we’re on to the next “must have”. It is obviously more complicated than this simplistic explanation. However, it does appear that the big drop in Pet Food Spending in 2016 shouldn’t have been totally unexpected considering the spending history of this huge Industry segment

I’m not an expert on the Pet Food segment but I included my view of the more recognizable trends. Sales seem to have really taken off after 2003. That was the year that Iams went into the Mass Market and may have signaled the first phase of the premiumization of Pet Food. Then came “Made in USA” because of the melamine recall which was followed by “Natural”. Then in 2014, we got “Super Premium”. What is next? The indication is ever-increasing “humanization”. 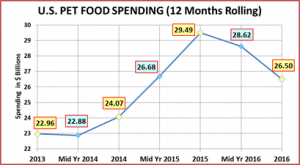 Pet Food Spending dipped in the first half of 2014. This corresponds to the beginning of a 2 year deflationary period in this segment. During deflation, in a “need” category like Food, you don’t buy more, you just spend less. The spectacular lift in Pet Food Spending beginning in the second half of 2014 came from a fundamental change in spending behavior. Consumers began to buy more Super Premium Food and Med/Supplements in Treat form, all of which cost more.

Then spending began to fall in the first half of 2016 and the decline intensified in the second half. Does that mean that Pet Parents were giving up on Super Premium and going back to their “old ways”? In some cases…maybe. However, consider this fact about current U.S. Consumers…price is the biggest driver (75%) of their behavior.

Once a consumer has decided on a specific type of product or brand, there is only 1 priority. Where and how can I buy it cheaper? Consumers spent 12.6% less on their Pet Food purchases in 2016. Were discounts available?

These new companies created and felt intense competitive pressure for the “upgrading” consumers. However, there was also intense pressure from “regular” food companies as they were actually losing consumers to the “upgrade”.

I think that it is pretty safe to say that there were discounts available. In fact 2016 may have been one of the most price competitive Pet Food markets in history – across all of its segments. U.S. consumers were seeking and finding “deals”.

Now let’s look at some specific Pet Food Spending Demographics. First, we’ll look at income. We will do it a little differently as we will show the annual spending from 2013 through 2016 so you can see the trend for the whole cycle.

The 2016 numbers in this chart and the one on Age Groups are highlighted to give you a better visual “read”.

In 2015, every income group except $70K>$99K increased its spending. With the spending drop in 2016, the positions were exactly reversed. This strongly suggests that there was a universal factor at work. It appears to be a competitive price war between manufacturers and retailers over the consumer’s Pet Food $. Since 2013, all segments but the <$30K group have increased total Pet Food Spending, although 52% of the national increase came from the over $150K group.

The chart below has some other key demographic “movers” behind the 2016 Pet Food Spending decrease. Take a look.

In the current “deflated”, highly price competitive market, it is difficult to get to the bottom of the decrease in spending. There certainly was no drop in pet ownership. So, did the decrease in $ come because consumers backed down from their 2015 upgrade to Super Premium foods or are they just taking advantage of the price competition to buy the products that they want for a cheaper price?  The answer is some of both. A certain percentage of lower income and price sensitive groups, like Retirees may very well have switched back to regular food. However, it appears that the bulk of the decrease comes from value shopping across a wide range of households.

Make no mistake. Price matters to U.S. consumers, especially on products that they buy on a regular basis. Consider that 50% of U.S. households spend more than their after tax income – a total deficit of -$550B. In fact, if you start from the lowest income group and work your way up, the total after tax income of the “bottom” 90% of U.S. households is only $2.2B more than their total expenditures (0.04%). Virtually every U.S. household compares products and prices before they buy. This process and for that matter, the actual buying, has gotten significantly easier in our internet world.

The biggest spending drops came from College Educated, Suburban, Homeowners. These are the smart pet parents that first saw the benefit of the upgraded food. It’s a good bet that they figured out how to buy what they want… cheaper.

On the flip side, the demographic groups showing spending increases in today’s market are definitely upgrading their food and/or adding pets to their families. The 25>34 year old Millennials are a prime example. Their $0.7B increase is reflected in and supported by increases for 4 person households, married couples with their oldest child under 6 and Technical workers. There also were increases by renters and Center City residents, which is more good news.

Probably the most concerning data is from the 35>54 age group, which is largely Gen Xers. Overall, they make and spend the most money of any age group. Their Pet Food spending in 2016 was down but they were also the only age group to show decreased spending in this segment from 2013. We’ll take a better look at this situation when we see the generation reports.

One of the key things that we learned in this analysis is that Pet Food spending doesn’t just go up every year. It appears to flow in 3 year cycles, corresponding with market trends. Two years of increases is followed by a plateau year or even a spending drop. Then consumers move on to the next “must buy”. Looking at this history, the 2016 drop fits the pattern. If history continues to repeat itself, we should have a flat first half of 2017. Then spending should turn sharply upward as the consumers respond to the continued “humanization” of our Pet Food. However, we’ll just have to wait and see.