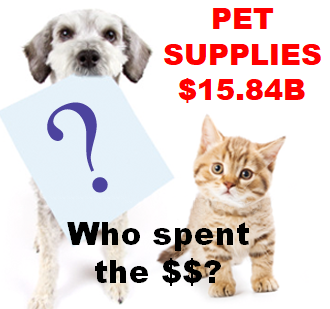 Next we’ll turn our attention to Pets and Supplies. We’ll see some differences from Pet Food as the spending in the Supplies segment is much more discretionary in nature. There are other factors too. Many product categories have become commoditized so pricing changes (CPI) can strongly impact Consumers’ buying behavior in this segment. Supplies’ Spending is also affected by the spending behavior in other segments. In 2015 Consumers spent $5.4B more on Pet Food. They helped pay for this by spending $2.1B less on supplies, primarily by purchasing 10% less frequently. In 2016, things turned around as Consumers value shopped for premium foods but spent $0.94B more on Supplies. This “lift” didn’t get the segment back to the $17B spent in 2014 but it was a good start in getting Supplies back on track.

Let’s see which groups were most responsible for the bulk of Pet Supplies spending in 2016 and the $0.94B lift. The first chart details the biggest pet supplies spenders for each of 10 demographic categories. It shows their share of CU’s, share of pet products spending and their spending performance (Share of spending/share of CU’s). Although their share of the Pet Supplies $ may be different from their share of the Total Pet $ or Food, all of the big spending groups are the same. The categories are presented in the order that reflects their share of Total Pet Spending. This highlights the differences in importance. In Pet Supplies spending, Homeowners have the lowest market share for any industry segment. However, the share of spending for Suburbanites is larger than for Food. All Pet Parents need supplies, regardless of their housing arrangement. However, if you have more space you have room for more supplies. Income is still the highest performing demographic characteristic and we’re back to 5 groups performing above 120%. Pet Food had only 4 as Education dropped out. Increased Education correlates with increased income and income is more important in supplies spending.

The biggest spending groups for Pet Supplies are the same as those for Total Pet and Pet Food. However, the discretionary nature of Supplies causes spending to be more impacted by income than Food. Groups associated with higher income, like Education and # Earners, have higher performance than in Food. The numbers are actually close to those of Total Pet. Supplies also has 5 groups performing above 120%, which shows greater disparity between segments.

As usual, most of the best and worst performers are those that we would expect. In Pet Supplies spending, there are only 4 that are different from 2015. That is less change than the 6 in Pet Food but it is still 1 more than for Total Pet. As we move deeper into the data, we will start to see even more differences between the Industry Segments. Changes from 2015 are “boxed”. We should note:

2016 was up $0.94B after a $2.1B drop in 2015 so there were a lot of changes. There are 2 repeat winners and 3 repeat losers. In 3 categories, last year’s loser was this year’s winner. In 1 category the winner and loser from 2015 switched positions. Retired persons were a surprise winner but the big news came from the Housing category where all segments had an increase. This occurred only one other time in 2016 – in Services: Racial/Ethnic Ctgy . Here are the specifics:

We’ve now seen the winners and losers in terms of increase/decrease in Pet Supplies Spending $ for 11 Demographic Categories. Overall, 2016 was a year of moderate changes. The winning increase in each category was generally around $0.5B while the biggest decrease was usually in the $0.2 to $0.3B range. We saw strong contributions both from the Gen Xers and the over 65 age group. While the $0.94B increase did not gain back the $2.1B spending drop in 2015, it’s a good start. As we have noted before, not every good performer can be “the” winner and some of these “hidden” segments should be recognized for their outstanding performance. They don’t win an award but they deserve… 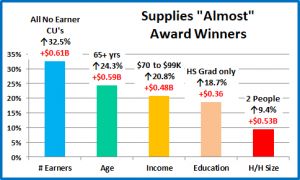 Pet Supplies spending was up $0.94B in 2016. While the increase was not huge, it was relatively demographically widespread as 53 of 82 segments (64.6%) spent more on Supplies. The “almost” winners in the chart reinforce the performance of both the older, retired Americans and the middle income group. We also see that you don’t have to have a College degree to buy Pet Supplies. These 5 segments didn’t win any awards but their combined Supplies spending increase totaled $2.57B. They made a difference.

In 2015 and 2016 we saw how significant changes in spending behavior in one Industry segment can impact the other segments. In 2015 a large group of consumers upgraded their Pet Food to Super Premium and spending took off – up $5.4B. However, in order to help pay for the upgrade, they cut their spending on Supplies (-$2.1B) and Veterinary ($0.5B). The $2.1B decrease resulted in a spending drop in Supplies in 74 of 82 Demographic segments (90%). It was pervasive. However, 2016 brought another change. Consumers began seriously price shopping for their high end Food, at retail and on the internet. They managed to save $2.99B and they used some of this savings to spend $0.94B more on Supplies and $1B more on Veterinary Services. Supplies didn’t come all the way back but it was a good start as almost 2/3 of the demographic segments increased spending in 2016.

Pet Supplies spending is more discretionary than Food but there are still many categories which are real needs for Pet Parents – dog collars and leads, cat litter, feeding bowls and even dog toys and chews, to name a few. Other categories like carriers, clothing and flea & tick items also become real needs under certain circumstances. The big difference between the Supply needs and Food needs is frequency of purchase. Overall, Pet Supplies are purchased less often than Pet Food and Treats but much more often than either of the Service Segments.

Although it is not an absolute necessity like Food, the spending behavior on Pet Supplies can also be a reflection of the percentage of pet ownership across a demographic category. The performance of the bulk of the spenders is also very important. We identified four demographic categories with high performing large groups. (There were 3 for Pet Food)

Increased income, higher education, homeownership and being married all generate increased pet supplies spending and all are categories in which the consumer can exercise some degree of control. The disparity in performance of segments within these categories allows industry participants to more effectively target both their best customers as well as those most in need of improvement.

The Value shopping for Food caused considerable turmoil in that segment. The bounce back in Supplies was a little calmer and more evenly dispersed. There were only 4 changes in the best and worst performing individual segments. As usual the biggest changes showed up in $. There were some surprising winners, like the Northeast, Central Cities and Retirees. There were also 2 major trends of note:

Finally – The “Ultimate” Pet Supplies Spending Consumer Unit consists of 3 people – a married couple, with their 17 year old child. They are in the 45 to 54 age range. They are White, but not of Hispanic origin. At least one of them has an advanced College Degree. Both of them work, running their own business and their child just started a part time, after school job. They’re doing well with an income over $200K. They still live in a small suburb, adjacent to a big city in the Western U.S. and are still paying off the mortgage.