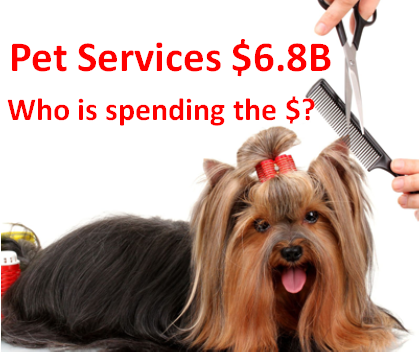 Now we will look at the last and smallest segment – Pet Services. We’ll see some similarities to other segments, especially Veterinary. However we’ll also see some big differences from the Product Segments and even from Veterinary. Each of these industry segments is unique. For one thing, Services spending is definitely more discretionary in nature than the other segments. This has resulted in CU income becoming the most dominant factor in spending behavior. We’ll see the impact of this in many demographic categories. We have seen some big spending swings in the other Industry Segments in the last 2 years. Services Prices have also been inflating at a rate that is below Veterinary, but much higher than the product segments. Thus far, at least on the surface, neither of these factors has affected the consistent annual growth in spending $ that Services has enjoyed since 2011. Let’s look a little deeper.

Let’s start by identifying the groups most responsible for the bulk of Services spending in 2016 and the $0.58B increase. The first chart details the biggest Pet Services spenders for each of 10 demographic categories. It shows their share of CU’s, share of pet products spending and their spending performance (Share of spending/share of CU’s). The differences from the other segments are immediately apparent. In order to better target the bulk of the spending we had to alter the groups in four categories – income, education, age and occupation. The performance level should also be noted as 7 of 10 groups have a performance level above 120%. This compares to 8 for Veterinary, 5 for Supplies and only 4 for Food. These big spenders are performing well but it also indicates that there is a large disparity between the best and worst performing segments. Income is absolutely the biggest factor in Services Spending. The categories are presented in the order that reflects their share of Total Pet Spending which highlights the differences of the 6 matching categories.

Most of the best and worst performers are not a surprise. In Pet Services spending, there are 7 that are different from 2015, the most of any segment. 4 of them are in the worst category. This is similar to the Veterinary Segment which is also very dependent on higher income for increased spending. As we drill deeper into the data, we will see some similarities with other Industry segments but each Segment is unique. Changes from 2015 are “boxed”. We should note:

Pet Services was up $0.58B for the 2nd year in a row. Despite this consistency, there was turmoil. There were only 2 repeat losers and 1 repeat winner from 2015. Also, 8 of the winners in 2015 were losers in 2016, while only 3 losers became winners. In 3 categories they just switched positions. This seems somewhat unusual for a segment with steady growth. Also, like Supplies, there was 1 category where all segments spent more. Here are the specifics:

We’ve now seen the winners and losers in terms of increase/decrease in Pet Services Spending $ for 11 Demographic Categories. Overall, 2016 was a year with much stronger and more widespread gains than losses. The winning increase in each category averaged +56% while the biggest decreases averaged -16%. We saw strong contributions from the 55 to 74 age group, the Central City and the West. The $0.58B increase matched 2015 and was the 5th consecutive increase, totaling $2.5B (+56.5%). Like the other Pet Segments, not every good performer can be “the” winner and some of these hidden segments should be recognized for their outstanding performance. They don’t win an award but they deserve… 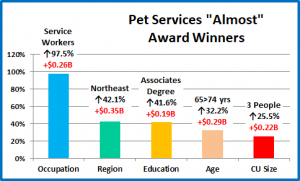 Pet Services spending was up $0.58B in 2016. The increase was in tune with the segment’s performance since 2011. It was relatively demographically widespread as 49 of 82 segments (59.8%) spent more on Services. These “almost” winners reinforce the contributions of the older folks, families and Central Cities. We also see that you don’t have to have a big income or a Master’s Degree to buy Pet Services. These 5 segments aren’t award winners but their combined Services spending increase was significant at $1.31B.

In 2015 and 2016, significant changes in spending behavior for Pet Food first negatively affected, then positively affected spending in the Supplies and Veterinary segments. Through this turmoil, Services spending seemed unfazed, quietly registering a $0.58B increase in both years. The increase was relatively widespread with 60% of all demographic segments registering an increase. Also, all segments in the Racial/Ethnic category increased spending on Services

Pet Services are definitely needed by some groups. However, for most demographics, Services are a convenience and spending is very discretionary in nature. The result of this is that CU income is of paramount importance to increased Services spending. This impacts many demographic categories and we adjusted the big spender groups in 3 categories specifically to accommodate this difference in behavior and to better target where most of the $ are coming from. Just how important is income? 37% of CU’s have an income over $70K and account for 66.7% of Services Spending. This is a performance rating of 180.7% – the highest rating earned by any group in any category in any industry segment.

Performance is an important measurement. Let’s drill deeper into the performance of the big spenders in Pet Services. We identified 5 demographic categories with high performing large groups. (There were 6 for Veterinary and 3 for Food)

The biggest producers in these groups all generate increased Services $ and all are categories in which the consumer can exercise some degree of control. The Racial/Ethnic and Age Categories also have high performance numbers but the consumer has no control over their inclusion in these groups. All 5 of these groups have a performance above 133%. This is incredibly high and indicates a huge disparity between the best and worst performing segments in the category. This disparity is greater in Services than in any other Industry segment. On the one hand this is good news as it makes it easier for industry participants to more effectively target their best customers. It also allows them to identify those demographic segments most in need of improvement. Unfortunately, these lowest performing groups may need considerable assistance.

There was definite turmoil in this income driven segment. There were 7 changes in the best and worst performing individual segments but the biggest changes showed up in $. 19 of 22 winners and losers in spending $ were different from 2015. In fact 8 2015 winners became losers in 2016, while 3 losers became winners. There were also some surprising winners, like the Retirees, Central City and the $30>49K income group. There were 2 major trends of note:

Finally – The “Ultimate” Pet Services Spending Consumer Unit consists of 2 people – a married couple, living alone now that their last child finally moved out. They are in the 55 to 64 age range. They are White, but not of Hispanic origin. At least one of them has an advanced College Degree. Both of them work, running their own business. They’re doing well with an income over $200K. They still live in a larger suburb, near a big city in the Western U.S. and are still paying off the mortgage on their home.