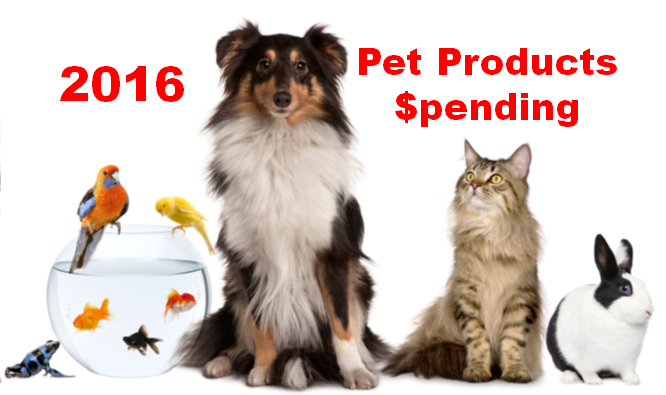 We looked at the Total Pet Spending for 2016 and its key demographic sources. Now it’s time to start drilling down into the data. We will ultimately look at each individual segment but the first stop in our journey of discovery will be Pet Products – Pet Food and Supplies. Taken as a total, this classification accounted for $42.34B (63%) of the $67.29 in Total Pet spending in 2016. This was down $2.05B (-4.5%) from the $44.39B that was spent in 2015. We have seen that this drop in spending came largely as a result of intense value shopping for premium foods. It’s also important to remember that although the products’ share of spending fell slightly from (65%) in 2015, Food and Supplies are the industry segments that are most familiar to consumers. They are stocked in over 200,000 U.S. retail outlets, including over 17,000 Vet Clinics, plus the internet. Every week over 20,000,000 U.S. households buy food and/or treats for their pet children.

Pet Food spending dropped by $2.99B in 2016 but at the same time spending on Pet Supplies spending increased by $0.94B. We’ll bundle them together and see where the bulk of Pet Products spending comes from?

We will proceed with the same methodology that we used in our Total Pet Analysis. First, we will look at Pet Products Spending in terms of 10 demographic categories to determine what groups are responsible for 60+% of the spending. Then we will look for the best and worst performing segments in each category and finally, the segments that generated the biggest dollar gains or losses in 2016.

The biggest spending groups are the same for Pet Products as for Total Pet. However, there are subtle differences in market share and in performance. Money still matters most but there are only 4 groups performing above the 120% level in Pet Products spending, one less than in Total Pet. In general, the Pet Product spending analysis better represents the demographic diversity of Pet ownership in the U.S.

Most of the best and worst performers are the ones that we would expect. There are only 5 that are different from 2015 but that is 2 more than for Total Pet. Changes from 2015 are “boxed”. We should note:

In this section we will see just how tumultuous 2016 was. There are no repeats from 2015. In 2 categories the 2015 winners and losers switched positions. In 3 other categories, last year’s winner is this year’s loser. However, there are also other surprises, like the performance of the 75+ age group and the good and bad performance of no earner CU’s.

We’ve now seen the “winners” and “losers” in terms of increase/decrease in Pet Products Spending $ for 11 Demographic Categories. It has truly been an eye opener. In 5 cases last year’s winner was this year’s loser. We have seen evidence of the significant contributions made by the younger groups in 2016 and we have had some truly surprising winners like the over 75 age group, no earner – singles and renters. Of course, not every good performer can be a winner but some of these “hidden” segments should be recognized for their outstanding performance. They don’t win an award but they deserve…. 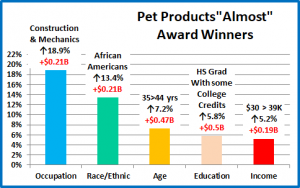 Pet Products spending was down over $2B in 2016 so any increase is significant. These 5 groups were not the best performers or groups with the biggest $ increase. However, together they generated an increase of $1.6B in Pet Products spending. The HS Grads with some college and the 35>44 age group together produced an extra $1B. African Americans and Construction Workers &  Mechanics had a big percentage increase. The $30>39K group had the only spending increase by a group making under $70K.

In both 2015 and 2016 we saw significant changes in spending behavior which strongly impacted the Pet Products sector of the industry. In 2015 a large number of households opted to upgrade to Super Premium foods. This resulted in a huge increase in Food spending but also reduced spending in other segments, especially Supplies. In 2016, consumers began a concerted effort to find the best price on their premium pet foods. They were successful and they saved a lot of money – $2.99B. This freed up funds for increased spending in the other segments, including $0.94B on Supplies.

On the surface, this seems like a very simple explanation – spent much less on Food and somewhat more on Supplies. Just do the addition and subtraction and our analysis should be done.  However, as we have learned, “simple” rarely applies in the Pet Industry. This is especially true of the Pet Products sector. Food and Supplies represent roughly 2/3 of all Pet Spending but it is more than just $.

Spending money on Food and Supplies is an absolute necessity in Pet Parenting. Obviously, your pet needs food every day so you must buy it regularly and often. Although Supply items are somewhat more discretionary in nature there are plenty of supplies that are also necessities for good pet parenting. Depending on the pet, you need things like a collar and lead, a feeding bowl and cat litter. Even durable dog toys are a “must have” in some situations. The big difference between Food and Supplies is the frequency of purchase. On average, Food is bought about every 3 weeks. Consumers buy dog toys every month or two. Collars are purchased annually at best and feeding bowls are bought about every 5-6 years. Cat litter is purchased on a regular routine because it is definitely a “must have” item for cat owners.

Increased income, homeownership and being married all generate increased pet products spending. These are all demographic characteristics in which the consumer has some control. The demographic segments in these categories allow industry participants to more effectively target their best customers and… those most in need of improvement.

Regarding big spenders, the age group skewed a little younger this year but there was very little change in the best and worst performing individual segments. The big changes occurred in $. There were some surprising winners – Central City, 75+ yrs & No Earner Singles, to name a few. Next up: We will drill even deeper into the Food & Supplies Segments.

Finally…The “Ultimate” Pet Products Spending Consumer Unit is down to 2 – a married couple, alone – their last child finally moved out. They are still in the 55 to 64 age range. They are White, but not of Hispanic origin. At least one of them has an advanced College Degree. They both still work in their own business and they’re earning over $200K. They still have a mortgage on their house located in a small suburb adjacent to a big city in the South. (Total Pet was West)