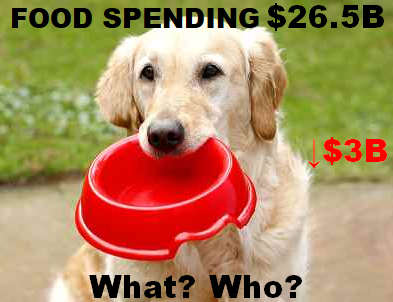 As we continue to drill ever deeper into the demographic Pet spending data from the US BLS, we have now reached the level of individual Industry segments. We will begin with Pet Food, the largest and arguably most influential of all. In other reports we have noted the trendy nature of Pet Food Spending – 2 years up then spending goes flat or turns downward for a year. 2015 and 2016 were prime examples of this. Pet Food Spending increased by $5.4B in 2015 as a significant group of consumers upgraded to higher priced Super Premium Foods. In 2016 they started looking for the best deal and their spending fell $2.99B (-10.1%). However, the $26.5B spent on Pet Food in 2016 was still $2.4B (10%) higher than 2014. The segment is just taking a pause in its upward climb.

Let’s see what and more specifically, which groups were most responsible for the bulk of Pet Food spending and the $2.99B downturn. The first chart details the biggest pet food spenders for each of 10 demographic categories. It shows their share of CU’s, share of pet products spending and their spending performance (Share of spending/share of CU’s). Although their share of the Pet Food $ may be different from their share of the Total Pet $, all of the big spending groups are the same. The categories are presented in the order that reflects their share of Total Pet Spending. This highlights the differences in importance. In Pet Food spending, higher education is less important while the wage and salary earners have a slightly higher share of the business. We should also note that, like Total Pet Spending, Income is the highest performing demographic characteristic. Another big difference is that Total Pet had 5 groups performing above 120%. Pet Food had only 4. This indicates that Pet Food spending and Pet ownership are spread more evenly across demographic segments. Pet Products also had only 4 groups over 120%. This reflects the influence of the Pet Food Segment which accounts for 63% of Total Products spending and 39% of all Pet Spending.

The biggest spending groups for Pet Food are the same as those for Total Pet and Pet Products. However, Pet food generally has a slightly lower market share and performance. This is showcased by the fact that there are only 4 groups with performance above 120%. Increased income still is the biggest driver of Pet Food Spending but the drop in performance by the higher education group is one of the best examples of the demographic diversity in pet ownership.

Even as we drill down to the Industry segment level, most of the best and worst performers are the ones that we would expect. In Pet Food spending, there are only 6 that are different from 2015 but that is 1 more than for Pet Products and 3 more than for Total Pet. From this point on we will start to see more and more differences between the Industry Segments. Changes from 2015 are “boxed”. We should note:

There are no repeats – winners or losers, from 2015. After the big lift in 2015, the best way to describe 2016 was topsy-turvy. In 6 cases the 2015 winner became this year’s loser. In 5 cases the opposite occurred. This includes three categories where both switched. There are also some surprise winners, like Renters and Central Cities. It is at this level where the demographic uniqueness of the different industry segments truly shows up. Here are the specifics:

We’ve now seen the “winners” and “losers” in terms of increase/decrease in Pet Food Spending $ for 11 Demographic Categories. The results reinforce that it was an “unusual” year. There were 22 groups named as winners or losers. 11 of them, 50% occupied the exact opposite position this year as they did in 2015. This produced some truly surprising winners, like Central Cities and renters. The contribution made by the Millennials was also very evident across multiple demographic categories. Of course, not every good performer can be a winner and some of these “hidden” segments should be recognized for their outstanding performance. They don’t win an award but they deserve…. 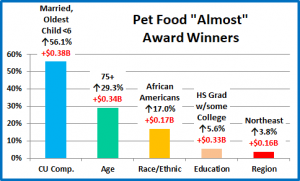 Pet Food spending was down $2.99B in 2016. In fact only 19 of 82 Demographic segments posted an increase. We have already named a number of these in our report. We want to add a few more that also deserve credit for their performance. These 5 weren’t the best performers or groups with the biggest $ increase. However, together they generated an increase of $1.4B in Pet Food spending. Some, like the 75+ group and African Americans may be a bit of a surprise but all deserve credit for their increase in Food $.

In 2015 and 2016 we saw significant changes in Pet Food spending behavior which reinforced the importance and impact that the Food segment has on the Total Industry and the other segments. In a very real demonstration of the humanization of our Pets, in 2015 a large group of Pet Parents chose to upgrade their Pet Food to super premium. This generated a $5.4B increase in spending. However, it came with a price. To help pay for this they chose to cut back their spending on Supplies and Veterinary Services by $2.6B. In 2016 the biggest driver in U.S. consumer spending came to the forefront – price. Consumers began to shop for the best price on their premium food – in other retail outlets and the internet. How widespread was this obsession? Very! In fact 63 of 82 demographic segments -77% – reduced their Food spending by $2.99B. However, Pet Parents didn’t just pocket the savings. They spent most of it, $2.5B in other segments.

Any analysis of Pet Food spending is always very important because of the unique nature of the segment. While some elements of Pet Food spending, like the form and quality, are very discretionary, it is the only Industry Segment that is an absolute spending necessity. If you are a Pet Parent, you must buy food for your pet children. Also, since your pet needs food every day, you must buy it regularly. The purchase frequency far exceeds other segments and in fact, every week over 20,000,000 U.S. households buy pet food and/or treats.

Because it is an absolute necessity, the spending behavior on Pet Food is perhaps the most important reflection of the percentage of pet ownership across a demographic category. The performance of the bulk of the spenders is also very important. We identified three demographic categories with high performing large groups. (There were 4 for Total Pet)

Increased income, homeownership and being married all generate increased pet food spending and all are categories in which the consumer can exercise some control. The disparity in performance of segments within these categories allows industry participants to more effectively target both their best customers and… those most in need of improvement.

The Value shopping in 2016 did cause some turmoil and the age group skewed a little younger this year but there was relatively little change in the best and worst performing individual segments. The big changes occurred in $. There were some surprising winners – 25>34 yrs, Central City and Renters, to name a few. Two of the biggest trends noted in our analysis are:

Finally – The “Ultimate” Pet Food Spending Consumer Unit is down to 2 – a married couple, alone since their last child finally moved out. They are in the 55 to 64 age range. They are White, but not of Hispanic origin. At least one of them has an advanced College Degree. They gave up their own business in favor of managers’ salaries that total over $200K. They relocated to the South from the West, but still live in a small suburb, adjacent to a big city and have a mortgage.