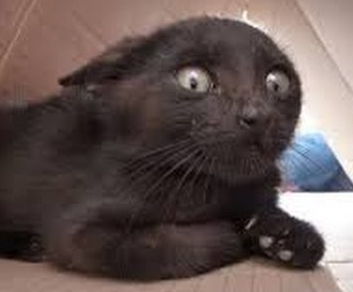 Although the decrease makes for a much less pleasant investigation than our analysis of Pet Food, it is necessary. We’ll “drill down” into the data to try to determine what and who are “behind” this big change. 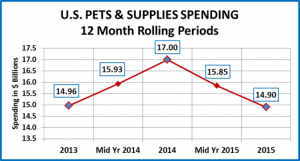 Let’s consider some relevant happenings in the overall Pet Market in 2015.

These are some possible reasons behind the decline. Now let’s look at “who” spent less. First, by Income  level.

Observations: Spending is down in all groups. It’s just a matter of how much. There is not a distinct pattern.

Let’s take a look at the spending by Age Group.

Observations: All groups spent less on Supplies. Here are some specifics starting with the biggest spenders:

All groups spent less on Supplies in the Age and Income Categories. Take a look at other Key Segments:

Summary: The drop in Supply Spending is so pervasive across the U.S. that it is difficult to point to a specific “who” behind the behavior. Home owners, 2+ People H/H’s, Married Couples with children – these are the core of the Pet Industry and they are all down – big time. About the only H/H likely to be up in Supply spending was a single person, working as a Manager or Professional, renting an apartment in the Center City in the Western U.S. – not exactly what we have come to recognize as the “ideal” Pet Parent Spending Household.

Basically, this puts the “onus” on “what” to explain the decline. When you do that, you have to come back to money. While some demographic segments have greater “economic” pressure than others, price has become the #1 factor (75%) in the buying decisions in America. Also, almost everyone, at every income level, lives on a budget. If you spend more in one area, then less money is available for other spending.

The Supply Segment is different from Food. While some Supplies are necessities, a lot are discretionary and impulse can also be a big factor. The CPI on Supplies rose for the first 9 months of 2015. This invariably depresses sales for “commoditized”, discretionary items. At the same time, Pet Food Spending took off and Veterinary Spending went up $2B in the Second Half of 2015. These are both “need” expenditures and can depress spending on discretionary items. A truly key fact that came out in the investigation was the drop in frequency of Supplies Spending. Pet Parents spent 4% less but…they bought 10% less often –that’s a big deal.

So what can be done? The surest “fix” is innovation. Consumers will spend more if a product is demonstrably better or makes Pet Parenting easier. However, this takes a lot of thought and effort. Are you ready to get started? What about the “Boomers”? They are 34.4% of the H/H’s. They spent 48.5% of the total Food & Supply $…and they’ll pay for better! How can you make life easier for this huge group of aging Pet Parents?