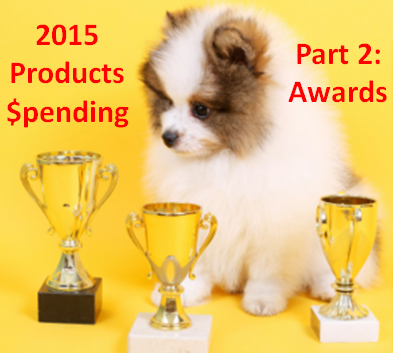 We’ll get started with the best “Performing” segments. To determine a segment’s performance we simply compare their share of the overall Pet Products Spending to their share of the total CU’s. (Financially independent Consumer Units) Example: If a segment spends 15% of all Pet Product $ and has 10% of all the CU’s, then their performance rating is 15/10 = 150% – very good. If their share of spending was only 5%, then their performance rating is 5/10 = 50% – not so good. This method puts every segment on a level playing field…then, may the best one win. All numbers in this report were calculated from data provided by the US BLS in their Consumer Expenditure Survey.

Most of the “winners and losers” are the same as last year and largely due to the extraordinary lift in Food spending, all the winners match the Total Pet Spending honorees. Let’s look at some differences of note from the 2014 list.

Now let’s truly “Show you the money”. In the next chart, we’ll look at the biggest $ changes in spending from 2014. In most cases there are both positive and negative situations. However, in 2 categories every segment spent more in 2015.

In this chart, we truly see the Boomer’s influence on Pet Products spending and how 2015 was radically different from 2014. Not only are there new winners and losers in virtually every category, but in many cases they just switched positions. 2015’s winner was 2014’s loser and vice versa. We’ll take a look at one demographic category at a time.

We’ve now seen the best overall performers and the “winners” and “losers” in terms of increase/decrease in Pet Product Spending $ for 11 Demographic Categories. Not every good performer can be a winner but some of these “hidden” segments should be recognized for their outstanding performance. They don’t win an award but they deserve… 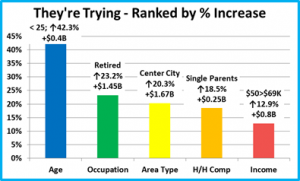 My earlier analysis of the Demographic factors in Pet Products spending indicated that there were 3 major factors behind the $3.3B increase in spending.

This in depth Demographic view strongly supports these assertions especially in the categories of Age, # in CU, CU Composition, Housing, Income and Occupation. In fact, the list should be expanded to include the 35>44 age segment as a Minus: (-$1.04B) and the under 25 age group as a Plus: Up (42.3%). The underlying reasons are a mixture of “financial pressure” for the decrease and “commitment to their companion animals” for the increase. The 25>44 age group are building careers, buying houses and taking care of most of the under 18 children in America. Their income is growing but not as fast as their responsibilities. On the other hand, the Boomers’ children have generally left the nest and now they can focus even more of their attention on their Pet family…and whatever they need, they get. The value of the new high quality foods caught their attention. They read and appreciated the facts and said “count me in”. However, they did cut back on spending in other segments because Food was their top priority. There was another significant positive move…but from the other end of the Age Spectrum. The Under 25 group stepped up with a radical increase in spending – adding pets and opting for high quality food. This bodes well for the future of the Pet Industry.

AND NOW…FINALLY, WHAT YOU HAVE ALL BEEN WAITING FOR…THE ULTIMATE PET PRODUCTS CONSUMER UNIT

The “Ultimate” Pet Products Spending Consumer Unit consists of 3 people – a married couple with an 18+ year old child, still living at home. Mom and Dad are in the 55 to 64 age range. They are White, but not of Hispanic origin. At least one of the Parents has an advanced College Degree. Everyone works in the H/H. Mom and Dad have their own business but their child also works, at least part time. They’re doing very well with a total Household income in excess of $150K. They own their home or to be more accurate, share ownership with the bank. They live in a rural area (under 2500 pop.) in the West, but it is adjacent to a good sized metropolitan area. This gives them plenty of space for their companion animals, but they are still close enough to commute to the City for business, shopping and entertainment – the benefits of the Urban environment…We all wish that there were more of them.

That “wraps it up” for this part of the report. In the final segment we “drill even deeper”- comparing Food to Supplies.